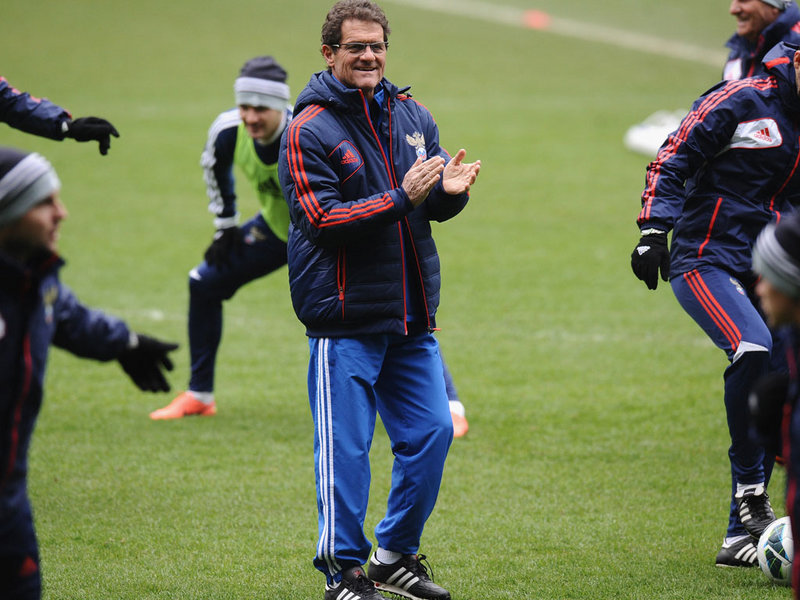 Fabio Capello remains as coach of the Russian national team, the Russian Football Union (RFU) confirmed yesterday after a meeting of the RFU executive committee. Capello has been heavily criticised as the coach of the national team ever since the country’s poor performance at the 2014 World Cup in Brazil. 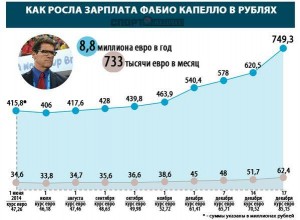 Although the rouble has since stabilized somewhat, the RFU felt the squeeze caused by the deflation of the Russian rouble, and began to fail to pay the coach’es monthly salary. After the rouble hit its lowest point, Capello continued doing his job without pay. In March 2015 the Uzbek oligarch, and Arsenal London shareholder, Alisher Usmanov stepped in and loaned the RFU $5.96 million in order to pay its debt to Capello.

Throughout this financial ordeal the Sbornaya, as Russia’s national team is often called, also struggled on the pitch. On June 14 the Sbornaya lost an important Euro 2016 qualification match to Austria 1-0 at the Otkrytie Arena in Moscow. As a result Russia is currently placed third in its qualification group, four points behind Sweden, and eight points behind the group leader Austria. With only the two first placed teams guaranteed a qualification spot for the European Championship that will take place in France next summer, Russia’s qualification for the tournament is in doubt. 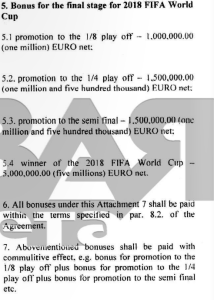 The RFU continued to struggle to pay Capello’s salary, and on June 22 Usmanov had to issue another loan to the RFU, this time for 300 million roubles (€4.9 million). On June 23 Russian Football News published, in full, the details of Capello’s contract. These details include a compensation clause, which promises Capello his full salary until June 2018 if the RFU decides to terminate his contract. Capello is set to earn another €16 million, and, in light of the RFU’s financial problems, it appeares unlikely that Capello will be let go.

At the same time, the poor results of the Sbornaya have led to increasingly loud calls for the RFU to fire Capello. A group of Russian fans have even started an online page called “Fabio, Go Home” in order to help the RFU to collect the necessary funds to pay off and fire the Italian coach.

Yesterday the RFU called for a meeting of the executive committee, and it appeared that Capello’s days at the helm of the Russian national team were numbered. Instead, however, RFU interim president Nikita Simonyan announced that Capello would, for now, remain as the coach of the Sbornaya.

Capello, however, could still see his contract ended by the RFU, which is due to elect a new president on September 2nd. As Sergey Stepashin told R-Sport.ru on Wednesday: “The executive committee of the RFU to date has no authority to remove or appoint the head coach. Therefore, on September 2 after we have elected a new head of the RFU, the new executive committee will be in charge over making decision regarding the coach of the national team, and his salary, and compensation.”

Meanwhile, Simonyan has already issued a list of potential replacements for Capello and has stated that the next coach should be Russian. “Possible candidates [as the future head coach of the national team] are [Alexander] Borodyuk, [Leonid] Slutsky, [Oleg] Kononov, and [Yuri] Semin.”

This seems to indicate that it is unlikely Capello will remain as the head coach of the Sbornaya after a new executive board, and president have been elected to lead the Russian Football Union.

At the same time, however, the RFU should question if they have done enough to provide Capello with an environment in which he can succeed. The fact that Russian Premier League clubs are heavily dependent on foreign talent has been highlighted by the German webpage Transfermarkt.de which on June 23 provided recent transfer values of Premier League players.

The 10 most valuable players of the Russian Premier League. via transfermarkt.de

The above webpage reports that only two Russian players who are eligible to play for the Russian national team made the top 10 CSKA Moscow’s playmaker, Alan Dzagoev (€18 million), and goalkeeper Igor Akinfeev (€15 million). In the top 25 only 5 Russian players or 20% made the list. In addition, at a statistics ranking published by Whoscored.com not a single player, who is eligible to play for the Sbornaya made the top 10. 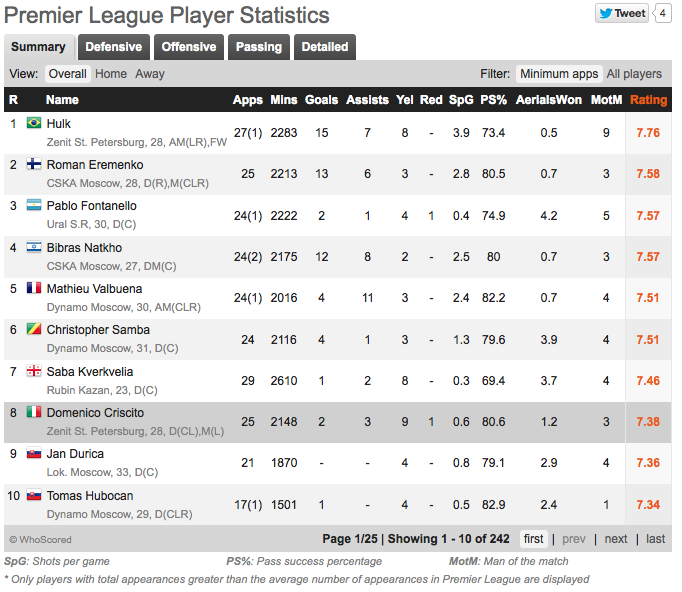 The top ten players in the Russian Premier League ranked by Whoscored.com


With all this in mind, the Russian Football Union should consider the possibility that Capello is being treated as a scapegoat for the poor results of the Russian national team. The facts point solidly to the conclusion that Russia’s poor performance is not the result of Capello’s coaching, but rather is the consequence of the failure on Russia’s part to adequately develop enough of its young players.

While the RFU has tried to address these issues by reducing the number of foreigners that clubs are permitted to field during league games, little has been done to improve the actual structures of youth development. In fact, reducing the number of foreigners could have the reverse effect. Because young, talented domestic players are in demand due to quotas, they are paid a tsar’s ransom and fail to excel; many receive too much too soon, and are reluctant to develop their talents in Europe’s top leagues, where their true worth would be assessed in a cold light. 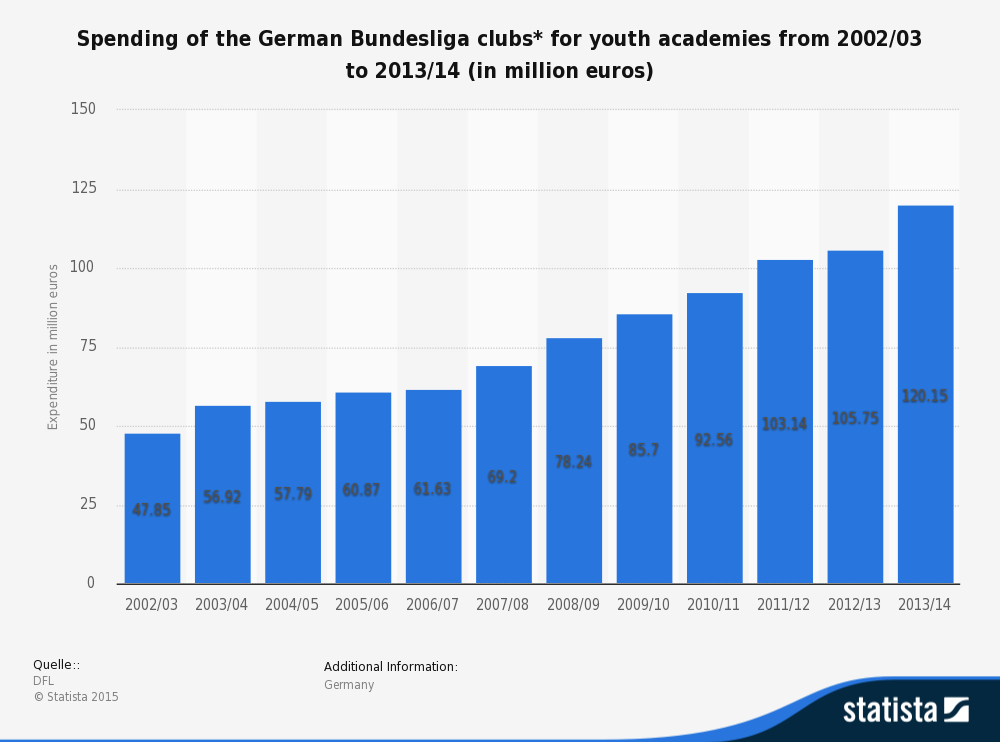 The German Bundesliga has invested heavily in their youth academies. Via Statista.com

In fact, the theory that foreign quota rules in top leagues help to strengthen the national team is a myth. Both Spain’s La Liga and Germany’s Bundesliga, for example, have no foreign limitation, and yet their respective national teams have dominated world football in the 2000s. Germany, especially, serves as a good example, for the country has completely overhauled its youth development system and has made it mandatory that all clubs of the 1. Bundesliga, and 2. Bundesliga maintain youth academies.

While Russian football authorities continue to take the easy way out by blaming Capello for the country’s poor results, the problems of the Sbornaya are more complex, and cannot be effectively addressed by simply replacing the national team coach.