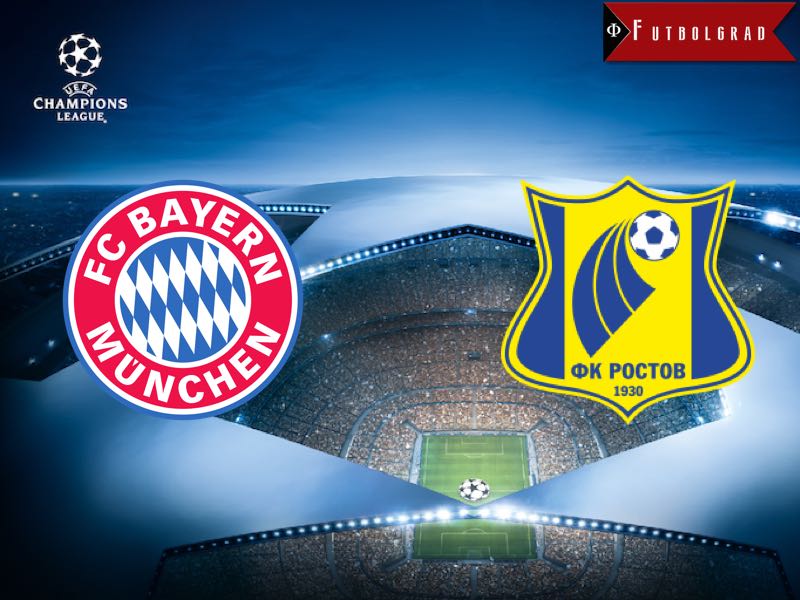 Carlo Ancelotti will start his Bayern München Champions League career against Russia’s Leicester FC Rostov (read our Champions League preview on FC Rostov here). Indeed, FC Bayern vs Rostov will see a German club, which has reached at least the semi-final of the competition in the last five years, play a team from Russia that has never before featured in the group stage of a European competition.

FC Bayern vs Rostov will, therefore, be the first time ever that the two clubs meet. Bayern’s coach, Carlo Ancelotti, however, has faced Rostov once with Juventus Turin in the now defunct UEFA Intertoto Cup. Back in 1999, Ancelotti’s side easily dispatched Rostov 9-1 on aggregate in the semi-final of the competition.

Current Rostov assistant coach, Dmitri Kirichenko, who guided the club to the group stage, was actually playing for Rostov when the Italian giants easily dismantled his team. Yet one doesn’t need to remind Kirichenko about the massive task his team is facing on Tuesday in Munich’s Allianz Arena against one of the world’s best club sides.

Kirichenko took over the club after Rostov eliminated RSC Anderlecht in the third round of the Champions League qualifiers, when former coach Kurban Berdyev stepped down from his position, as the manager of the club. But he has since been replaced by Ivan Daniliants, one of the other assistant coaches to former manager Berdyev.

Officially, Berdyev cited Rostov’s continued financial problems as the main reason behind his motivation to leave the club. It is believed, however, that the Turkmen manager was eyeing a lucrative job elsewhere, as he reportedly was negotiating with Spartak Moscow, Lokomotiv Moscow, and the Russian national team (more on this here).

In the end, Berdyev was not able to land any of those jobs, as it is believed that his asking price, together with his demands to chose his own coaching staff, caused both the Moscow clubs and the Russian Football Union to look elsewhere when hiring new managers.

Berdyev is now back at Rostov and the club has listed him as an assistant coach to new manager Ivan Daniliants, who was appointed on September 9, in the Champions League squad list. Despite his official UEFA role Berdyev is officially listed by the club, as a consultant, and vice-president.

Regardless, Berdyev’s continued involvement at Rostov means that Bayern will have to be careful when approaching the match against the Russian minnows. Berdyev, after all, became famous in 2009 when he orchestrated Rubin Kazan’s unlikely 2-1 Champions League victory at Camp Nou against FC Barcelona.

In this curious setup between the assistant and his former assistant, Berdyev is likely still in charge of the club’s tactical makeup and will, therefore, approach the match much like many matches in the 2015-16 Russian Football Premier League, when Rostov stood back and sprang quickly on counter attacks.

Last season, Bayern München was often susceptible to counter attacks, as former manager Pep Guardiola was known to have his back for press far up the pitch. In his first few matches with Bayern, Ancelotti, however, already made some small adjustments, as Bayern now seem more compact in back, which could prove to be bad news for Rostov.