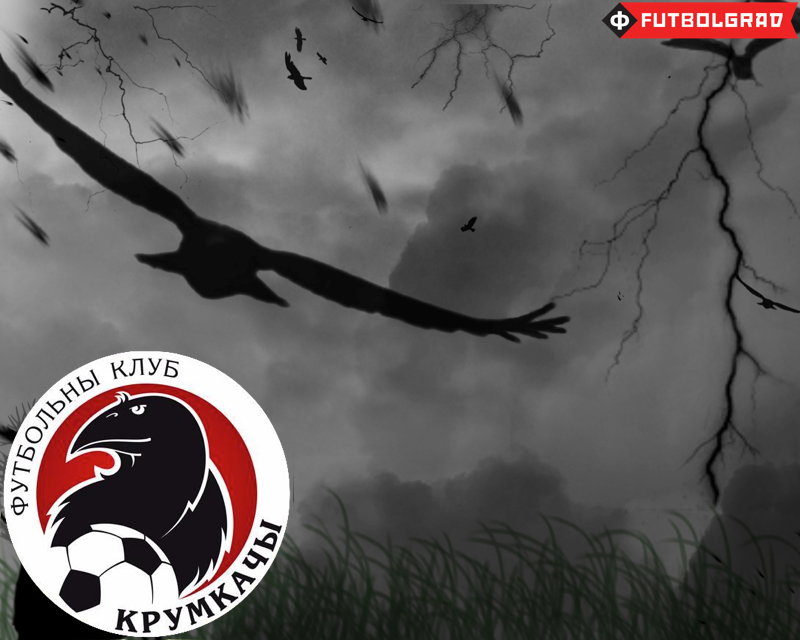 FC Krumkachy – The Crows are Ready to Conquer Belarus

FC Krumkachy are “the most  beautiful story of Belorussian football over the last years.” That is how the television program Belarus 1 described the project of FC Krumkachy, a club which has easily climbed the Belorussian football pyramid in the last few years. Founded four years ago by a group of journalists from the popular online forum PressBall, the club initially consisted of just eleven people who decided to take part in the Belarusian amateur leagues.

As time went by, however, many news fans were attracted not only by the curious name (Krumkachy translates to Crows), but also by the fact that the club decided to join the Belorussian second league. 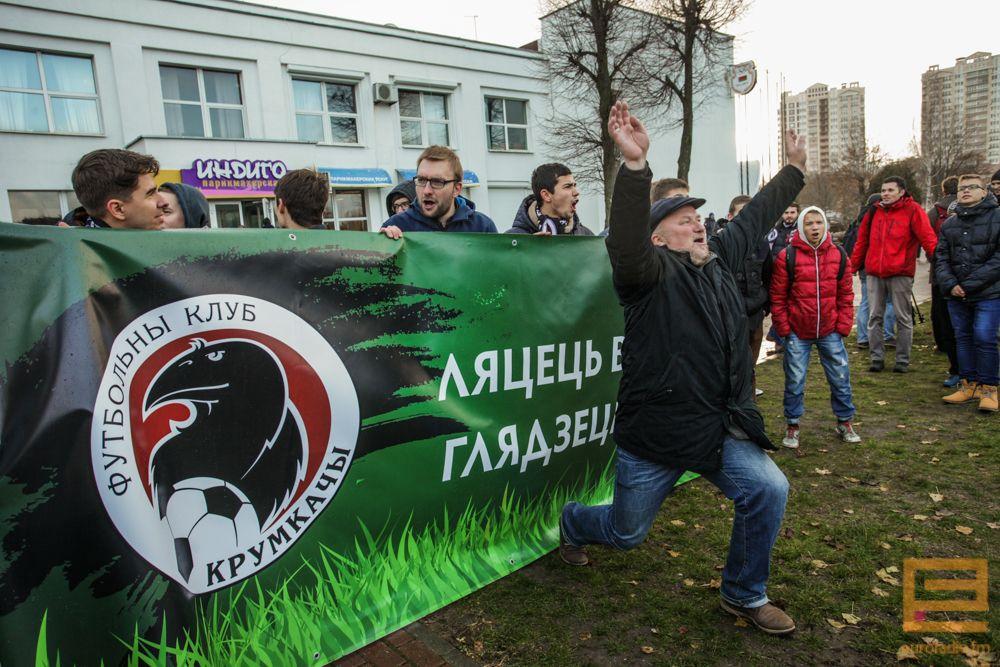 Fans have been attracted to the club due to its curious name – Image via euroradio.fm

That is how, in March 2014 the fairy tale story of FC Krumkachy started. Despite initial skepticism, they managed without any problem to be promoted to the Belorussian first league, winning the silver medal, behind Baranovichi, in their first year. Before long, however, the first problems occurred. In the first game Gorodeya defeated them, and a week later, Kobrin also succeeded in taking three points from them. The players took nothing seriously at the time and needed a radical reorganization.

Professionalism Arrived in the Form of  Coach Oleg Dulub

Attacking midfielder Filipp Ivanov later admitted, “Everything changed with the arrival of coach Oleg Dulub, who changed the approach of coaching at the club, and helped to professionalize the club.”  Dulub is a well-known figure in Belorussian football as he had played for Dinamo Minsk.

Dulub later revealed the secret, of his success: “My favourite film is Moneyball, my way of work is like that of the main protagonist of the movie, we base everything on the stats. The story is similar, but compared to the end of the film, we luckily managed to win (laughs).” Dulub also succeeded in signing the “Belorussian Eva Carneiro” Yuliya Skshinetskaya to the club’s staff, and the club’s medic has helped to improve the team’s popularity by appearing on various television shows. 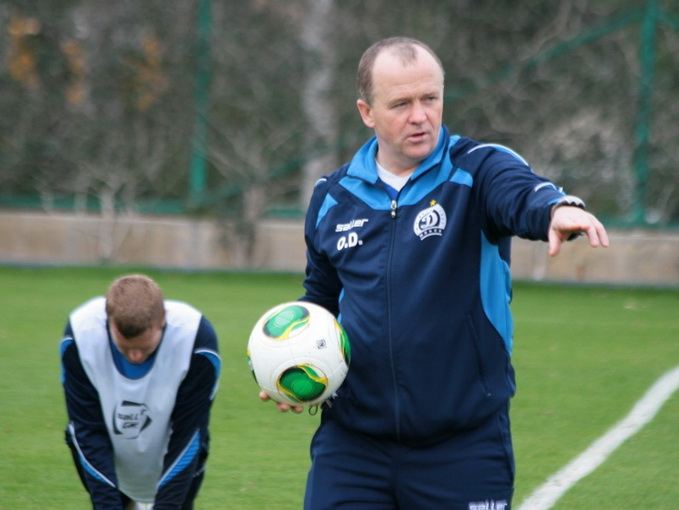 The rise of Krumkachy was gradual and concluded with the game against Dnepr Mogilev, which represented a real clash between the present and the past. The ‘Crows’ won 2:0. Among others, it’s worth underlining the contributions of Sergey Koshel, (who was not only the top scorer in the team with 17 goals, but also was the only player to take part in all 30 matches), and the veteran Sergey Kovalchuk, (who curiously had already won the Belorussian first league with Slavia-Mozyr in 2011).

The success of the club is even more remarkable considering that chairman Denis Shunto decided to dress up and play two games as a striker—his short lived career is, however, over, as it is unlikely that he will play in the top division.

Now, FC Krumkachy has a clearly defined strategy for the future. They aren’t looking for some sponsors, but rather for partners who are ready to finance the project over many years. They also want to keep the Olimpiyskiy as their home stadium—it is located in the center of Minsk and meets all the requirements of the Belorussian Premier League.

Furthermore, Denis Shunto admitted that he wants to make Krumkachy the most popular club in Minsk. A recent poll confirmed that the leadership has done a good job attracting new supporters, especially among young fans. This was evident in the club’s last game this season against Dnepr Mogilev, which was completely sold out many days before the game.

Humility as a Secret to Success

Another secret of Krumkachy’s success is their humility. Most of the players are amateurs and have daytime jobs. Captain Aleksander Skshinetskiy, for example, is a businessman and he’s married to the aforementioned Yuliya, while center back Roman Gaev works in a food store. The most sensational, story, however, involves goalkeeper Evgeniy Kostyukevich.

Born in Zhodino, when he was 18 he had the opportunity to sign for the Russian giants CSKA Moscow, but some health problems stopped his career. A few months ago Kostyukevich was signed by Krumkachy as a video operator and coach’s assistant. But when goalkeeper Vitaliy Makavchik left the team, Kostyukevich took his place and established himself as one of the best players in the Belorussian first league. Now, he can’t wait to prove his value against strong opponents like BATE Borisov, Dinamo Minsk, and Shakhter Soligorsk.

Many Belarusian journalists have high hopes for Krumkachy and the club’s project is often compared to that of BATE Borisov. The Crows also, however, have been criticized many times in the Belorussian media for their low attendance and  lack of history. 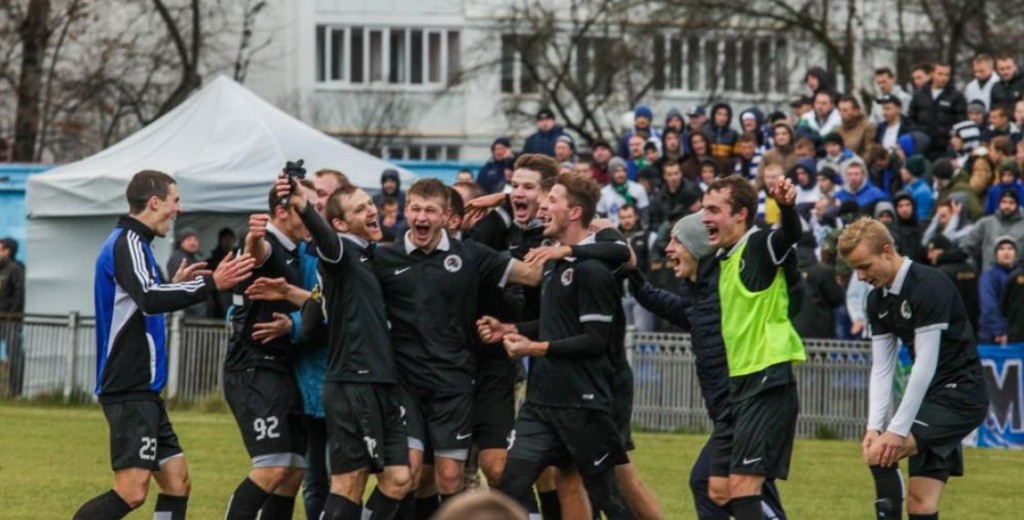 Even the well known agent Valeriy Isaev accused Krumkachy of “being unaware of the responsibilities and the requirements of the Belorussian top league.” He added: “Krumkachy has set a bad precedent. They demonstrated that without any investment, each club can be promoted to the Vysshaya Liga.” He emphasized, “both Isloch and Krumkachy shouldn’t be given licenses. These clubs are only the result of the artificial expansion of the Belorussian top league.” Shunto immediately replied: “This is his opinion. There are many people in Belorussian football who don’t like him.”

There is some truth to Isaev’s words. At the same time, however, what fan has not dreamed of founding a club and bringing it to the highest level? Shunto and his men have done it—and this is still not the end of history. The Crows are ready to take off again. Shunto has already denied his love for BATE and confirmed his support for Dinamo Minsk, thereby revealing that he dreams to defeat his favorite team.

Shakhter, instead, expressed their happiness and even suggested that Dulub be named the new head coach of the Belorussian national team. There will be many expectations for the team’s success, and hopefully the Krumkachy’s fans won’t be disappointed. A hymn has already been composed and officials eagerly anticipate filling up the Olimpiyskiy, as games at the stadium could become the hottest ticket in town.

Stefano is a half Russian, half Italian Football writer. Stefano supports Lokomotiv Moscow. Stefano is the founder of the FCLMblog, the only blog about Lokomotiv outside Russia, and FCLMmagazine, which is the first magazine in English for an Eastern Europe football club. I currently contribute to Russian Football News and MondoFutbol. I’m interested in everything related to Russia and the post-Soviet world. Follow Stefano on Twitter @confortistefano