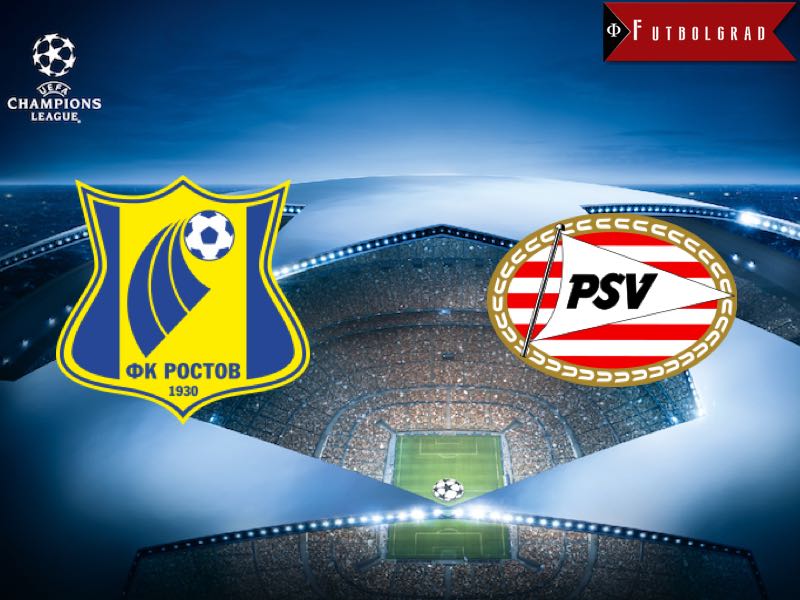 FC Rostov vs PSV Eindhoven will be the Russian’s Champions League group stage home premier at the Olimp-2, as the Russian Football Premier League silver medal winner is looking for another Dutch scalp this season.

Rostov shocked Ajax Amsterdam in the playoffs to the Champions League group stage, as the Russians battled to a 1-1 draw in Amsterdam, and then dispatched the Eredivisie record Champion 4-1 in front of their home fans.

At the same time, however, Rostov received a reality check on match day one of the Champions League group stage when they were beaten 5-0 by Bayern München at the Allianz Arena.

In many ways, the match in Munich demonstrated the gulf between the smaller clubs and the mega clubs in the Champions League competition, as Bayern were threatened at no point and the score could easily have been higher. For Rostov, this means that they now have to regroup somewhat before facing PSV Eindhoven on Wednesday night.

Eindhoven have not won an away match in the UEFA Champions League since beating Rostov’s league competitor CSKA Moscow in the 2007-08 Champions League group stage. Eindhoven’s poor away record and Rostov’s victory against Ajax would, therefore, indicate that the Russians are favourites on Wednesday night.

But Rostov are a bit of a different club. The RFPL team managed a sensational second place finish last season, despite the fact that the club has massive debt and, at some point, was unable to pay its players. Then, before the current season, manager Kurban Berdyev resigned, and then returned to the club as vice-president and consultant after jobs elsewhere failed to materialize—a saving face procedure as he very much is in charge when it comes to tactics and coaching.

There was hope that Champions League football could stabilize the financial situation at the club. But a recent interview by Russia’s Business-Gazeta with head coach, Ivan Daniliants, following the club’s heavy 4-0 defeat to second division club Dinamo Moscow in the Russian Cup, suggests that the club continues to experience financial difficulties and remains unable to pay debts owned to players and coaches.

Furthermore, Rostov now struggles to cope with the extra number of matches scheduled, as the thin squad means that rotation is almost impossible between matches. With this in mind, it would be easy to suggest that Eindhoven are in line to record their first away game in nine years. But in the past 12 months, Rostov have shown that they should never be counted out, and that the squad is more than capable of producing extraordinary results in difficult situations.