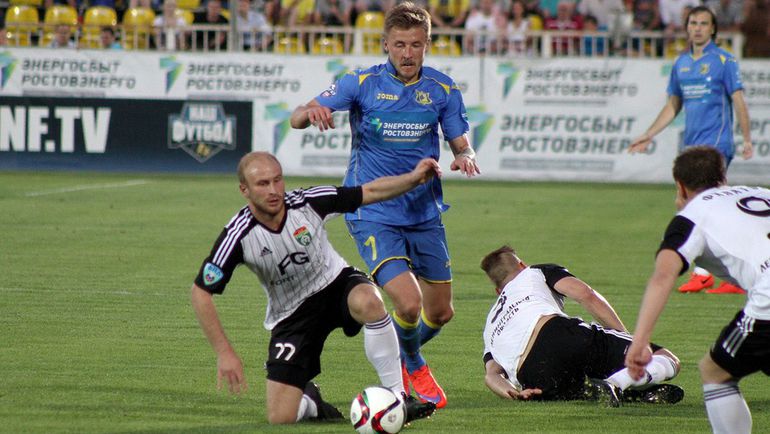 This fact is underlined by the refusal of several FK Rostov players to fly to Saint Petersburg to play the Russian Cup round of 16 match against the FNL club Tosno. The game is scheduled to take place today, and it now appears that Rostov will have to play the match without several first team players in the squad.

Russia’s Sovetskii Sport reported that if wages are not paid in the near future, the first team players and the coaching staff of FK Rostov also will boycott Monday’s Premier League match against Kuban Krasnodar.

Rostov’s debts have been well documented: on February 28, 2015 Toke Møller Theilade in an article for Futbolgrad reported on the massive debts accumulated by the club. According to Theilade, Rostov had accumulated a debt of 711,500,000 roubles (€10.34 million). In addition, the club owes €2.7 million in unpaid wages to players and staff.

FK Rostov also owes €810.000 to four players for unpaid signing bonuses. As a result, the Russian Football Union (RFU) banned Rostov from registering new players in December, but this ban was lifted on February 26, one day before the club signed Vladimir Granat and Artyom Dzyuba on a six-month loan. At the time Rostov was placed last in the league and looked like a certain relegation candidate, but in the end—with the support of the recently signed Granat and Dzyuba—Rostov was able to fight off relegation.

The relegation battle, however, was a costly endeavour that caused the club to accumulate even more debt. In May it appeared that the RFU would take away Rostov’s RFPL licence, and that the club would be forced to go down after all. The club was only saved with the help of the Greek-Russian oligarch Ivan Savvidis; the owner of the Greek club PAOK FC provided 100 million roubles in financial aid, apparently free of charge (UEFA regulations do not allow multiple club ownership).

Despite its financial problems, Rostov was granted a licence in June to play in RFPL, but at the same time severe restrictions were imposed—the club was given a temporary transfer ban, and initially was only allowed to register 18 players for the 2015-16 season. Then, on August 17, the club management released a statement that all but 30% of the debt owed to players and staff had been paid.

Now, however, it appears that Savvidis’ loan was mainly used to pay the wages that Rostov owed Russia’s star striker Dzyuba, who won a case against the club on September 10. Following the arbitration hearing between Dzyuba and Rostov, the Dispute Resolution Chambers of the Russian Football Union re-imposed Rostov’s transfer ban and squad limitations.

The September 10 hearing between Rostov and Dzyuba suggests that the club had grossly overstated the amount of debt it had paid off. This speculation is supported by the events that are currently taking place in Rostov. When asked about the boycott, Rostov’s forward, Dmitri Poloz stated, “This is an internal issue. But there is indebtedness, and there are financial problems here. Other than that I have nothing more to say.”

The above sequence of events brings into question the licensing process of the RFPL; the club should perhaps have received more severe penalties over the summer. Rostov will be a host city of Russia’s World Cup, however, and it would not be surprising if, once again, an oligarch steps in to save the day for FK Rostov.