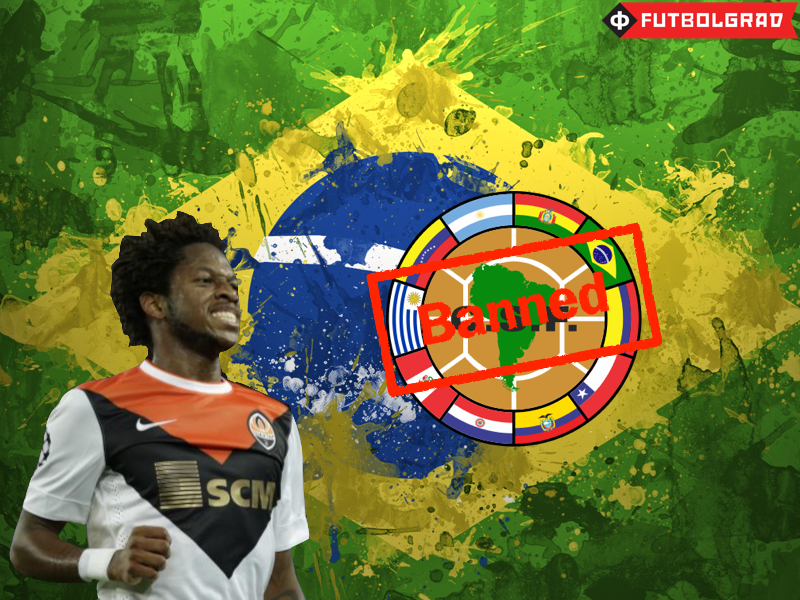 Shakhtar Donetsk received some disappointing news over the weekend, when the Brazilian media broke the news that the club’s midfielder, Fred, has received a one year suspension from CONMEBOL, the football governing body in South America.

Fred first failed a doping test back in July during the Copa America, testing positive for a banned substance used to mask traces of illegal drugs in the urine. He then failed a secondary test, but as neither nor UEFA nor FIFA took any action to formally sanction him, Fred continued to feature in the Shakhtar squad all season.

After Shakhtar defeated Fenerbahçe in the Champions League qualifiers, the Turkish club filed an appeal against the result, arguing that the result should not have stood because of Fred’s positive doping test, but UEFA declined the appeal, as it had no legal basis.

That may soon be changing. The CONMEBOL punishment only applies to South American games and means that Fred will no long be able to take part in matches for the Brazilian national team, which rules him out of next summer’s Copa America centenary in the United States. CONMEBOL will now hand over the relevant documents of the case to FIFA, who will determine whether the ban will be extended to all competitions.

Earlier, the Brazilian website Estadão had reported that Fred faced a lengthy ban of up to four years, so the one year suspension is a comparatively light punishment. Nevertheless, Fred’s attorneys have said that they intend to file an appeal in the case, telling the Brazilian news portal Universo Online “We still have the appeals chamber of CONMEBOL that we can use. We will analyze the decision and solve this.”

As for the player himself, Fred has consistently maintained his innocence and has recently said “I don’t pay attention to these problems. My job is to play, and let the lawyers take care of the rest.”

Today Germany’s Kicker Magazin reported that FIFA was reviewing the case, and that Fred may very well be suspended. Whether the Brazilian is paying attention or not, should FIFA decide on a similar punishment for all competitions, Shakhtar could be in serious trouble. So far this season Fred has played in 12 of Shakhtar’s 16 Ukrainian Premier League fixtures and in all 10 Champions League matches, including the qualifying rounds.

With star striker Alex Teixeira possibly leaving the club in the winter, losing Fred would be a major blow to Shakhtar, who are currently first in the UPL and will play German side Schalke in the Round of 32 of the Europa League in February.

The highly rated young Ukrainian midfielder Viktor Kovalenko, also a central midfielder, is a potential replacement for Fred, but so far he has come off the bench in all but three of his fifteen appearances in the UPL and in all seven in the Champions League. Recalling Ruslan Malinovskyi from Zorya is another option, but there is no doubt that manager Mircea Lucescu would prefer to retain the services of the 22-year-old Brazilian international.