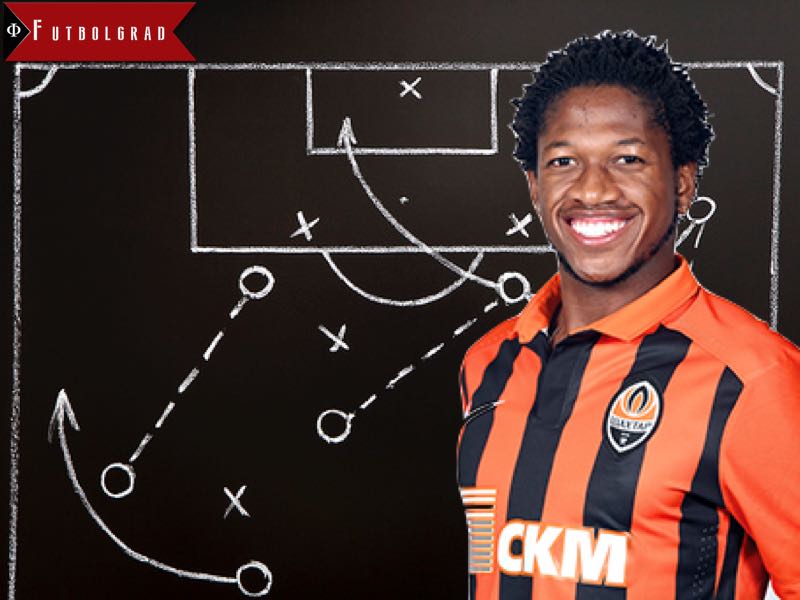 Shakhtar Donetsk’s defensive midfielder Frederico Rodrigues Santos, better known as Fred, has been very much the unsung hero of a stellar side this season.

We have featured a vast array of Shakhtar Donetsk players of late, but with Paulo Fonseca leading his side to a 13-point lead over rivals Dynamo Kyiv, and with winning six out of six games in the Europa League, it is not difficult to praise the work done at Shakhtar Donetsk this season.

In fact, Shakhtar were a major talking point in Episode 5 of the World Football Index Futbolgrad Podcast, as we discussed the all-Ukrainian Derby between Dynamo Kyiv and Shakhtar Donetsk. Shakhtar won the match 4-3 and now look to be the shoo-in to claim the Ukrainian Premier League title.

Vadim Furmanov and I discussed the many changes that Paulo Fonseca has been able to bring to the squad, and the fact that several players have played a more important role under the new head coach. In the past, we have drawn attention to the development of players such as Dentinho, Bernard, and Andriy Boryachuk.

Furmanov, in particular, has pointed out the importance of Fred in Shakhtar’s game this season, and has gone so far as to call him the best player of the season. His performance against Dynamo Kyiv alone makes it difficult to disagree with him


The 23-year-old Brazilian defensive midfielder was key in Shakhtar’s transition game at the Ukrainian Derby. He broke up plays on his own penalty box, and then used his great speed to break forward, thereby making it possible for Shakhtar’s four attacking players to swarm forward at great speed as well.

What stands out the most in those scenes is the fact that Fred can pick out players while moving forward at great speed; his ability to make the right decision swiftly is phenomenal.

The most astonishing aspect about Fred’s play, however, is the fact that the Brazilian is very short, just 169cm, and therefore seems more suited for an attacking position. But despite his small stature, Fred is a rock in Shakhtar’s defensive midfield, for he reads the game very well and can, therefore, break up plays without being overly physical. In fact, the tiny Brazilian always finds ways to solve tight situations with his technical abilities.

His physical short coming, however, has meant that Fonseca often pairs Fred with a more physical present defensive midfielder. More often than not, this role has fallen to the Ukrainian midfielder Taras Stepanenko, who at 181cm has a greater presence in the air, and by hanging back allows Fred to join attacking plays.

Fred needs to be paired with a defensive minded midfielder

The presence of a more defensive midfielder in Shakhtar’s squad, be it in the 4-2-3-1 formation or the 4-2-2-2 formation, has allowed Fred to be an attacking threat himself, and the Brazilian has already scored twice in the UPL, and once in the Europa League.

For Shakhtar, Fred’s season must also be satisfying given the fact that the Brazilian missed much of last season after he tested positive for diuretic hydrochlorothiazide in a sample collected at the 2015 Copa América. Initially Fred was just banned for international fixtures organized by the South American football federation COMNEBOL.

But then in February 2016, Fred’s ban was converted to a 6-month long world wide ban by FIFA, which meant that the Brazilian missed the remainder of the 2015-16 season. Fred was on track to gain a regular spot in the Seleção, and was also a key piece for Shakhtar Donetsk, which at the time was coached by Mircea Lucescu.

Receiving a six-month ban right at that time must have been tough for the then 22-year-old Brazilian. Living in Ukraine, far away from his native Brazil, and not being allowed to play football, could have indeed put a major damper on the young player’s career.

Shakhtar’s large Brazilian community, however, meant that Fred had a fantastic support network throughout the six months in which he was only allowed to train with the club.

Then, in the summer, head coach, Mircea Lucescu, who was a significant factor in Fred joining Shakhtar in the summer of 2013 from Internacional Porto Alegre, left the club to join Zenit Saint Petersburg in Russia. This could have been a time of uncertainty for Fred, but Shakhtar’s new coach, Paulo Fonseca, appeared to be a fan of the young Brazilian, and the Miners offered the Brazilian a new contract that will run until the summer of 2021.

Being offered a new contract despite the fact that he missed six-months due to a doping ban, was a massive vote of confidence for the Brazilian—and he responded by becoming the club’s most important player this season.

In fact, there is no doubt that Fred could be the next highly touted Brazilian to achieve a major breakthrough at Shakhtar, and go on to a fantastic career in a major European league. Given that Fred is just 23-years-old and that he has been impressive both in the Ukrainian Premier League and the Europa League, it will only be a matter of time before big European clubs take a serious look at the Brazilian star.