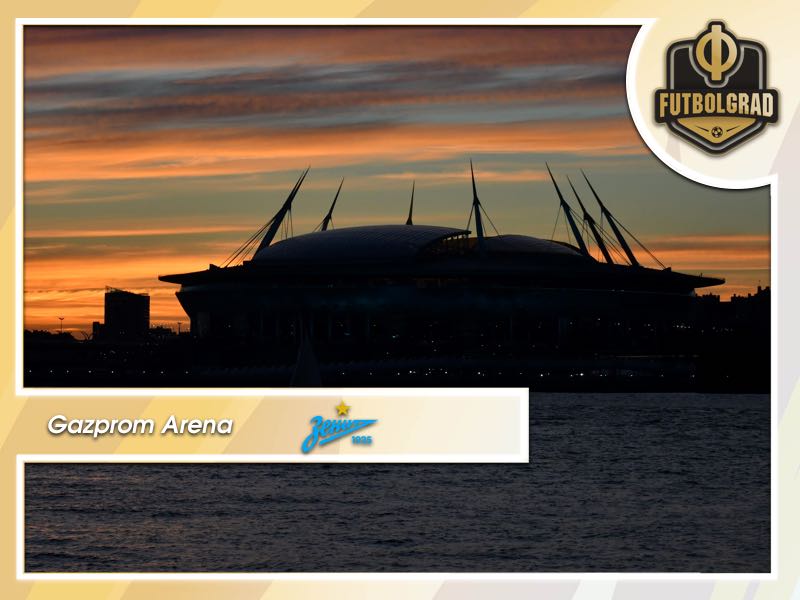 Gazprom Arena – The Controversy Behind The Name Change

Zenit’s decision to rename the world’s most expensive football specific stadium from Krestovsky Stadium to Gazprom Arena has been a hot topic in Russia. The decision that the Krestovsky was going to be renamed was officially announced last week.

The stadium, which was constructed on Krestovsky Island just a few kilometres west of the old Petrovsky Stadium, has made headlines in the past for the long delays in its completion—the deadline was pushed back from the original March 2009 date, to the end of 2011, then 2013, followed by 2015, and then December 2016. The stadium was finally opened in April 2017 and was a very successful venue during the 2017 FIFA Confederations Cup and last summer’s 2018 FIFA World Cup.

Construction on the stadium began in 2007 and was original to be completed in 2008. But the stadium was hit with several setbacks and budget problems, which meant that construction had to be paused. Originally the project was supposed to be financed by Gazprom, but the oil and gas company exited the project in 2009 with the administration of the project moving over to the city government.

Gazprom has always been one of the main protagonists in the story that led to the many delays of the stadium construction. Initially, the stadium was supposed to cost $248.9 million. Changes to the original design, failure by Gazprom to finance the project, and the death of the architect, were some of the factors which caused repeated delays of the project. Then there were also issues regarding the location of the stadium. Built inside the old Kirov Stadium, a massive concrete structure from the 1950s that could hold 100,000 people, the ground provided problematic for the stadium planners.

The difficulties mentioned above were some of the key issues expressed to the Futbolgrad Network when we visited the construction side in 2015. At that point, the construction costs of the facility were rumoured to be $1.5 billion—surpassing the costs of the Wembley Stadium in London, which cost $1.47 billion – the now renamed Gazprom Arena could, however, lose its spot as the most expensive football-specific stadium in the world to Tottenham’s new arena in North London.

Gazprom Arena – The History Behind The Name

Regardless, Zenit now renaming the stadium Gazprom Arena has caused some concerns among St. Petersburg’s political elite. Gazprom was originally in charge of the construction of the stadium but pulled out of the financing of the facility in favour of pursuing other commercial interests in the city.

Furthermore, the Russian sports page Sports.ru highlighted that Gazprom had earned the city of St. Petersburg billions of roubles in taxes after moving Gazprom Neft’s headquarters from Omsk to St. Petersburg. Already back then it was decided that the costs of the construction from a new arena should be coming from the city’s budget.

Nonetheless, what followed was many years on which there was a public squabble over the name of the new stadium. Zenit, and their owner Gazprom, always preferred the name Gazprom Arena. Meanwhile, the Governor St. Petersburg Valentina Matvienko promised in June 2009 that there would be an open competition about the future name of the stadium. That argument was countered by Gazprom CEO Alexey Miller, who in September 2009 stated that the stadium would be called Gazprom Arena.

The Gazprom Arena during the World Cup. (Photo by Julian Finney/Getty Images)

Standing next to Matvienko during a public address Miller said: “The name of the stadium should be given in a modern way. The advertising space provides stable funding for FC Zenit in the long-term.” Matvienko agreed right away and said that “many residents agreed that Gazprom Arena would be a good name for the stadium.

What followed were politicians promising that there would be an open competition for a new name. In December 2009 the head of the St. Petersburg sports committee Vyacheslav Chazov told the media that there were thousands of proposals for a new name. Among them Stadium of Peter the Great, Galaxy, Flying Dutchman, White Night, 12-Player, Triumphant, Zenit Arena, Krestovsky and Gazprom Arena. Chazov, however, said that he did not approve of the name Gazprom Arena.

The subject was then closed until 2016 when the city published an opinion poll in which 37% of the people asked were in favour of the name St. Petersburg Arena. It was the name that was eventually used at the World Cup. Zenit, however, would opt to use the term Zenit Arena in 2017 when the club officially moved to the stadium. But FIFA’s decision to go with the name St. Petersburg Arena had nothing to do with the world governing body supporting one name over another. Instead, FIFA, like UEFA, does not allow sponsor names in stadium names and regularly renames facilities for international competition – for example, Munich’s Allianz Arena became the Arena München during the World Cup in 2006 and also sports that name whenever Bayern play in the Champions League.

Following the tournament, however, the issue seemed to have come to a pass. Named Krestovvsky Stadium for Zenit’s international games in the Europa League the facility was often referred to as Zenit Arena for Russian Premier Liga games, until the club announced Gazprom Arena as the new name on December 8.

That, in turn, has upset government officials in St. Petersburg. “The decision to rename the stadium should be made by the people. I have in the past told the governor that the people should vote on this matter. I regret that such a citywide discussion did not happen,” St. Petersburg’s vice-governor Igor Albin told the Russian media on Friday. Albin was supported by the Duma deputy Mikhail Romanov from Russia’s Edinoi Rossii party. “The stadium was built on budget money and, therefore, belongs to the people,” Romanov told the media. The MP recalled that because of taking over the construction of the arena social projects worth 2.5 billion roubles could not be completed.

All of those calls, however, overlook that Zenit was given all commercial rights to the facility upon the completion of the arena.

“For us [the discussions] are the consequence of banal ignorance of the conditions of the agreements made between the city and the club, or the lack of global practices of doing sports business. The agreement clearly states that the club – apart from the fact that the club gets full control of the stadium – has the power over all commercial rights, including the assignment and change of the commercial name,” Zenit spokesperson Anton Makarenko explained to the media. “These matters are left to the discretion of the club and do not require additional approvals of the city administration,” Makarenko concluded.

The matter for Zenit is quite simple. The club needs additional income – especially given that the club has once again come under additional scrutiny by UEFA’s Financial Fair Play watchdogs after the German magazine Der Spiegel leaked documents over Zenit’s financial practices in November. The magazine, in particular, questioned the amount of money the club received by its owner Gazprom about what Gazprom was paying the German club FC Schalke 04, who are also sponsored by the Russian oil and gas giant.

With Zenit having failed to qualify for the Champions League in the last two seasons and the club spending close to €100 million in new players just two seasons ago opening up new revenue streams was paramount. Furthermore, by taking over the stadium, Zenit have taken over financial obligations (about 1.9 billion roubles a year) to run the facility.

Hence, the club needed to source additional revenue and although Gazprom is the owner of the club buying the naming rights of the Gazprom Arena will not be viewed as additional loans by the owner to the club, which in turn eases the club’s FFP obligations. Furthermore, while the renaming of the Kretovsky Arena to Gazprom Arena has come with plenty of political noise, the club is acting within the parameters of the agreement set between the club and the city.

At the same time, the story of the Gazprom Arena also typifies Russia and its politics on various levels. First, there was the long construction of the stadium with all its implications of corruptions and delays. Second, came the involvement of big Russian business in the form of Gazprom. Third, you had the populist move by politicians angry about the stadium being named the Gazprom Arena while being in complete disregard about the actual agreements that were made between the city and the club. It is in many ways a Russian theatre-play in three acts that so well encompasses the society as a whole.