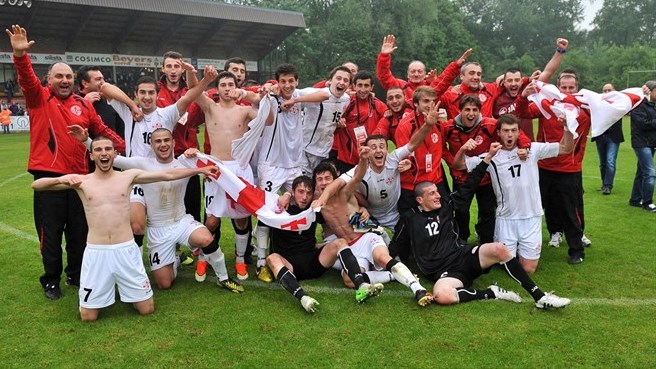 Georgia to Host European Under-19 Championships in 2017

While Georgia’s European integration at the political level plods along at a pedestrian, sometimes stationary pace, the country appears to have been warmly accepted and trusted by the continent’s football authorities, as UEFA announced that Georgia will host the European Under-19 Championships in 2017.

The news broke at the start of a year in which Tbilisi will play host to the UEFA Super Cup, where the likes of Bayern Munich and Real Madrid could be potential guests in the Georgian capital.

Hosting both events successfully will elevate Georgia’s status in European football circles, despite its recent shortcomings at full national level on the pitch.

Domenti Sichinava, who has been president of the Georgian Football Federation since October 2009, expressed his delight at the decision: “I congratulate Georgian football on such an important achievement. We are pleased that the Executive Committee of UEFA trusted our country and Football Federation. After two years of work, we will hold the finals in Georgia!”

The tournament contains eight teams, with Georgia qualifying automatically as hosts. Four venues are to be used for the finals with Tbilisi, Rustavi, Mtskheta and Gori the selected host cities and towns.

Observant readers will note that the stadiums in every location will require varying degrees of work before being ready for a major youth tournament.

UEFA rules state that matches cannot be played on artificial surfaces which means the current synthetic pitches in places at Mtskheta and Rustavi will have to be removed and replaced with grass.

Other stadia expenses foreseen were outlined by Sichinava: “I cannot say how much it will cost to host the championships. The stadiums must satisfy either 2nd or 3rd UEFA category, we need to upgrade press areas, VIP suites. There is also the need for 8 training pitches which can be no further than 30 minutes from the stadia.”

With the stadiums at Rustavi, Mtskheta and Gori in particular need of an overhaul, it was no surprise that Sichinava revealed work would begin this year, two years before the finals are held in July 2017.

Interestingly, Georgia’s largest stadium, Dinamo Arena, will not be used for the championships, with the GFF president explaining that its capacity (55,000) was excessive for the crowds expected and that it was already occupied with hosting this year’s Super Cup. Mikheil Meskhi Stadium, roughly half the capacity of Dinamo, will be the only Tbilisi stadium used, and will almost certainly host the final.

Critics have questioned the value to Georgian football of spending large amounts of its scarce resources on hosting tournaments and high-profile matches, while the domestic league flounders and the national team plummets to well outside the world’s top 100.

Government support has been assured for the hosting of the championships, stipulated in a decree signed last year but it remains unclear whether the country’s football authorities have their priorities in order.

For Georgian fans, one big night in August in Tbilisi this year and two weeks of Europe’s best young talent playing in Georgia in two years’ time will be scant consolation if the country’s on-pitch malaise thickens simultaneously.

When asked which other countries had bid to host the 2017 finals, Sichinava revealed: “we beat England.” If nothing else, this was a rare opportunity for a Georgian football official to say that.