Georgia finally want to pick up a win in World Cup qualification. The Caucasus Republic has taken three points out of the first six matches in UEFA Group D. Their biggest result came in the 1-1 draw against Wales in Cardiff on matchday 1.

At the same time, the campaign has been a bit of a disappointment. Georgia were hoping to build on their previous campaigns and finally squeeze into a top two spot in World Cup qualifying. But a tight group that includes three teams that qualified for the European Championships last summer, Austria, Ireland and Wales, as well as Moldova and Serbia meant that the post-Soviet Republic had a mountain to climb.

A close defeat to Austria on matchday 1 in Tbilisi was met with some consternation. Austria seemed beatable that day, but as it is often the case, Georgia could not get the job done. In some ways, this has been the story of Georgia since achieving independence from the Soviet Union in 1990.

Always a football mad country Georgia was a hotbed of Soviet football. The Boris Paichadze Dinamo Arena was always filled and was a cauldron for Soviet Vysshaya Liga games. Nowadays Dinamo Tbilisi only plays in front of a handful of games in the Georgian Erovnuli Liga. But the national team still draws capacity crowds, and the Boris Paichadze Dinamo Arena is therefore always a difficult place to play for travelling teams.

That said Ireland would travel to Georgia with plenty of confidence. Still undefeated with three wins and three draws Ireland are second in the group behind Serbia. Both Serbia and Ireland are on 12 points each and with Serbia hosting Moldova on Saturday Ireland will want to go for all three points to keep the pace with

Georgia vs Ireland – Players to look out for:

Robbie Brady is one of many Irish players playing in the English Premier League. Signed by Burnley from the Championship side Norwich City last January for €15.10 million. In 14 games last season he scored one goal and two assists for Burnley. His numbers were a bit better in the Championship last year where he scored four goals and five assists in 23 Championship games. The difference was perhaps that he was forced to play a bit further back at Burnley in the Premier League. Brady will be pushed a bit more forward playing for Ireland and could be a good scoring candidate as a result. 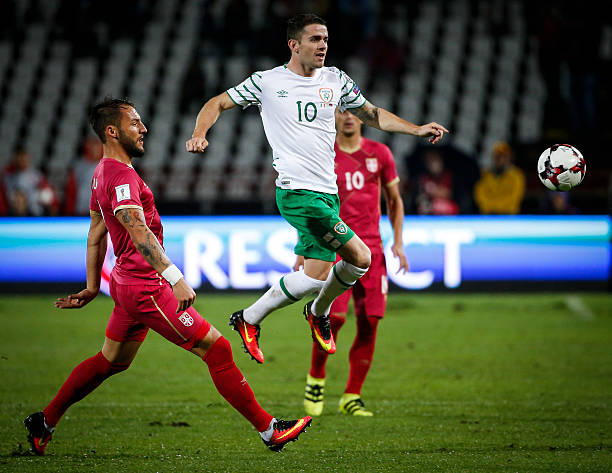