Giuliano – The Background to his Escape to Fenerbahçe

Zenit Saint Petersburg Argentine invasion has its first victim. The Brazilian star midfielder Giuliano was spotted travelling to Turkey on Friday morning and is about to join the Turkish club Fenerbahçe.

Giuliano’s escape to Turkey is in many ways a surprise. The Brazilian was one of the most important players for Zenit last season. Moved from the wing to the centre of the pitch to play in a trequartista role behind a natural striker Giuliano managed eight goals and seven assists in 28 Russian Football Premier League games. Furthermore, he added another eight goals and six assists in eight Europa League games, which made him one of the most efficient players in that competition.

Despite Giuliano’s strong personal season, however, Zenit struggled. Head coach Mircea Lucescu at times underestimated the Russian Football Premier League, and his tactics that were successful in Ukraine did not work in Russia. Lucescu believed he could sign no-name Brazilians and develop them in the same way he did with Shakhtar and then sell them on with a profit. 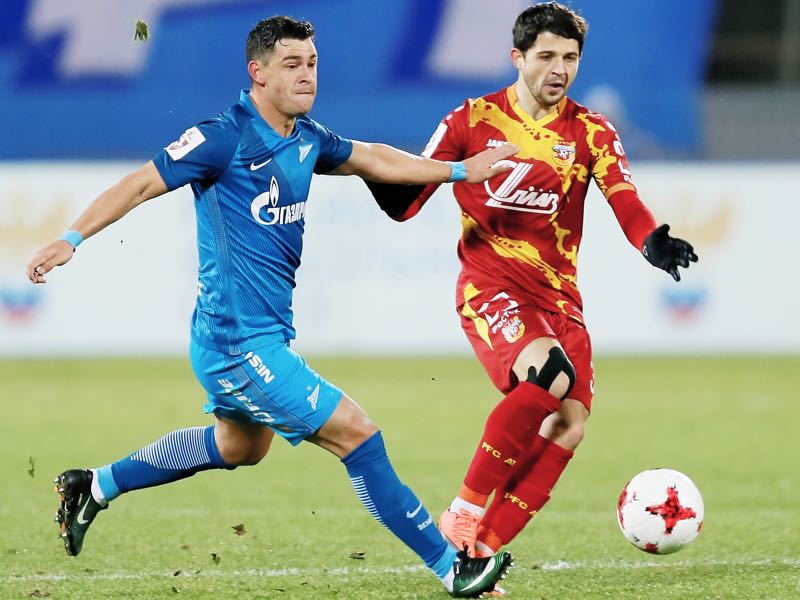 But of all the Brazilians signed only Giuliano worked out. Hernani, who was brought in to replace Axel Witsel during the winter, was a flop and has been sent out on loan to AS Saint-Etienne this week. The result of the policy was that Lucescu failed to reach the UEFA Champions League with Zenit.

Zenit is a Marketing Product for Gazprom

Zenit is in many ways a marketing product of Gazprom and for the marketing product to work the club needs Champions League football. The bosses, therefore, decided that Lucescu’s way of finding talented players and bring them to another level did not fit the philosophy of the club. The Romanian coach was therefore fired this summer and replaced with the Italian star coach Roberto Mancini.

Mancini has since embarked on a policy of bringing in stars from Argentina. The club has thus far signed the Argentines Leandro Paredes, Emanuel Mammana, Sebastián Driussi and Matías Kranevitter. Furthermore, it is expected that Zenit will still complete the signing of Emiliano Rigoni from Independiente.

Russian clubs, however, are allowed to just field five foreigners at one time and with the five Argentines plus the Ecuadorian Christian Noboa space was running out for Giuliano. Furthermore, Mancini prefers different tactics to Mircea Lucescu.

Where the Romanian played with a 4-2-3-1 formation with Giuliano in the central midfield role behind star striker Artem Dzyuba, Roberto Mancini likes to play using a 4-3-3 or 4-4-2 formation with variable players up front. As a result, both Aleksandr Kokorin and Driussi have seen the bulk of action this far in the season.

Giuliano has been mostly left on the bench. Giuliano has just played two games for Zenit’s in the RFPL this season and was also used in the third round of UEFA Europa League qualification.

As Zenit’s biggest star from last season, Giuliano has been very negative about this development and has told his bosses that he wanted to leave. Another factor has also been the Argentine contingent. Giuliano is believed to feel alienated at the club and seemed to have struggled with Mancini.

As a result, the Brazilian has asked to leave the club, and with Zenit having to meet FFP, yes that rule is still around despite PSG’s best attempts to dismantle the system, Zenit were happy to cash in on the attacking midfielder. Hence, when Fenerbahçe approached to sign Giuliano, they were glad to negotiate.

On Friday Giuliano arrived in Istanbul for his medical and the clubs have arranged a loan to buy deal in the region of €9 million (€3 million for the loan €6 million to complete the transaction). Fenerbahçe will receive a Brazilian national team player (read the scout report here), who can play both behind a natural striker, but also on both wings and Zenit can use the money to complete the deal for Rigoni, who is still waiting in Argentina to have his contract situation resolved.

Loading...
Newer Post
The Neymar Case and the Need of a Salary Cap in European Football
Older Post
Monterrey vs Chivas – Liga MX Game of the Week