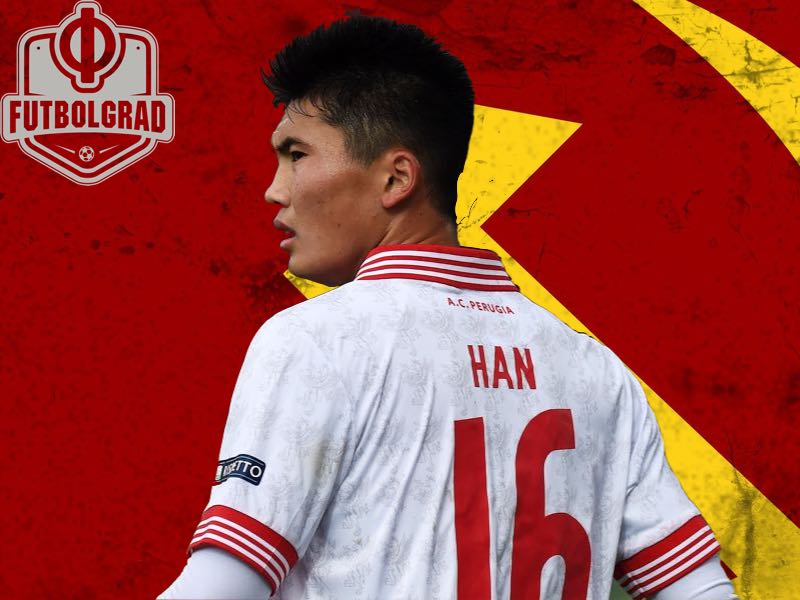 It is one of the more bizarre transfer stories involving an Italian Serie A club this season. Juventus Turin are interested in signing North Korean forward Han Kwang-Son from the Italian Serie B side Perugia. On loan from Cagliari Calcio, Han Kwang-Son has scored seven goals and three assists in 17 games for Perugia Calcio this season, and Juventus believe that the North Korean forward can help them secure a more significant market share in the growing Asian market.

There is, however, a catch. Born in Pyongyang the 19-year-old forward only plays in Italy under special permission by the North Korean government. According to Fox Sports Australia, his citizenship could now threaten a move to Juventus. Under North Korean law any wages earned by its citizens outside the borders of North Korea belong to the government of the Peoples’ Republic.

Given the current political climate signing Han Kwang-Son from Cagliari, who own his rights, could be understood as indirectly funding North Korea’s dictatorship and the country’s nuclear program. Confronted with the wage issue, Cagliari have since stated that they pay Han Kwang-Son’s wages directly to the player, but also concede that they do not know what he does with his money.

Perugia’s club officials in the meantime have pointed out that the North Korean government keeps close tabs on the development of their players abroad. The striker was scheduled to appear on Italian television, but the event was cancelled “after a call from a not very clear ministry figure arrived and blocked everything.” Massimiliano Santopadre told the Italian paper La Stampa. “Negotiating was impossible because Pyongyang want to talk only and exclusively with Han Kwang-Son.”

Santopadre further points out that “the situation with the government has become even more rigid and their footballers have been prohibited from appearing on television. Otherwise, they would have repatriated him. Han is scared.” The difficult political situation and the question on where wages for North Korean footballers end up has already torpedoed Fiorentina’s move for Han Kwang-Son’s compatriot Choe Song-Hyok, who withdrew their contract offer after claims that they were funding a rogue nation.

The controversy over North Korean footballers has a precedent, however. Back in the 1980s, Juventus was among the first clubs in Western Europe to sign players from the Soviet Union. The USSR officially allowed players to move abroad in 1988 and one of the first players to make a move was Oleksandr Zavarov, who joined Juventus Turin from Dynamo Kyiv for a then record-breaking $5 million.

Sovintersport, a sports agency set up by the Soviet government, to deal with athletes that were either sold to the West or competed in international competitions, negotiated the entire deal. Sovintersport negotiated an agreement with Juventus, which saw Zavarov earning 250,000,000 Lira (about $ 190,000 at the time) a year. The deal saw a large junk of the money go back to the Soviet Union. Zavarov was given an apartment, a car, and free medical treatment. He was to receive 16,800 Lira a month while staying in Italy, while the remainder of the money was transferred back to the Soviet Union as income tax and social contributions. 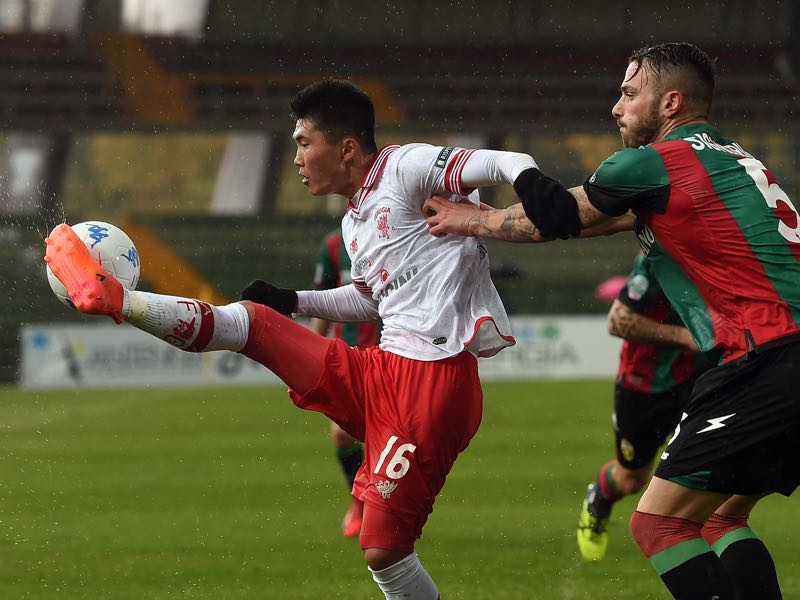 At the time it was common practice by Sovintersport to pocket the majority of the earnings of top Soviet athletes who were competing abroad. In tennis, for example, players who competed in international competitions at the time were only allowed to retain a fraction of the prize money they won at international tournaments. Andrei Chesnokov, at the time the USSR’s top male tennis player, only kept about $10,000 to $12,000 of the $500,000 he won in the period between 1984 and 1989. In 1988 he won $59,000 at a tournament in Orlando, but the winnings went to the federation, which only transferred $496 to him.

Viktor Galaev, the director of Sovintersport at the time, argued that the system adequately supported Soviet athletes: ‘they get coaches, doctors, everything.’ The practice of taking money from athletes can also be found in the contracts of Soviet ice hockey players. Here, at first, Sovintersport took 97% of the salary, but players were later able to negotiate a deal in which they received a base salary of $300,000, with slightly less going back to Sovintersport.

The process meant that some players struggled while living abroad. Legendary Soviet keeper Rinat Dasaev and 1988 World Keeper of the Year Rinat Dasaev, was sold by Spartak Moscow to the Spanish club Sevilla for $2 million. In this case, Goskomsport took 55%, Spartak received 40%, and 5% went to the sports agency Dorna.

The money earned from the Dasaev deal was directly transferred from Dorna Management Ltd. to Sovintersport’s account with the Vneshekonombank, the State Bank for Development and Foreign Economic Affairs. Material found at the Russian State Archive showed that Sovintersport received $300,000 on February 15, 1989, June 15, 1989, December 15, 1989, June 15, 1990, December 15, 1990, and 500,000 in a final transfer on June 15, 1991. Archive material collected at the Russian State Archive did not, however, indicate how the money was distributed afterwards.

Some reports at the time suggested that Dasaev received a salary of $1,300 from Sevilla and also had a free car and an apartment. This put Dasaev on a contract far below what average players were making at the time in European football. The average football player in England’s top flight in 1988 earned £37,284, for example, and, even taking into account the fact that players in England may have received more than their counterparts in Spain, Dasaev’s wage was likely far below the average salary of a Spanish player at the same level.

Dasaev at the time was 31 and had been named goalkeeper of the year in the Soviet Union for the sixth time in a row. He was also considered one of the best keepers in the world and was part of the remarkable Soviet team that finished second at Euro 1988 in Germany. His official earnings at Seville were meagre, while Sovintersport cashed in massively. 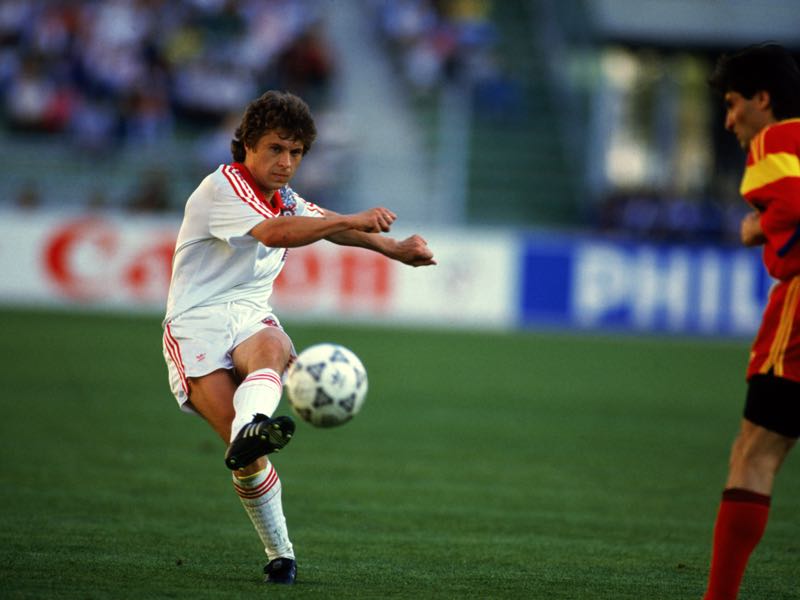 Soviet star Oleksandr Zavarov saw much of his wages pocketed by Soviet state agencies when he played for Juventus in the 1980s. (Photo by Simon Bruty/Getty Images)

After a poor performance at the World Cup 1990 in Italy, and finding himself on the bench frequently as the fourth foreigner—Spanish clubs at the time were only allowed to field three foreigners at a time—Dasaev retired from professional football in 1991. After he had disappeared from the public eye for several years, a reporter from the Russian newspaper Komsomol’skaia Pravda finally tracked him down in 1998.

Dasaev was living in poverty in Spain and was persuaded to return to Russia where he was greeted as a hero and has since worked in several capacities for the Russian Football Union. The entire episode screams of foul play, for Sovintersport, was able (via Dorna) to obtain the market value for the keeper from Seville, and the evidence suggests that Sovintersport pocketed the majority of the income that athletes earned abroad.

At the same time, it has to be noted that the late Soviet Union cannot be entirely compared with the current regime in Pyongyang. Led by Mikhail Gorbachev, the USSR was undergoing an extensive program of Glasnost and Perestroika and was interested in opening up the country to the West. This is by no means the case with North Korea, which only allows players to move abroad to enhance the prestige and, as it appears, earn hard currency for the country.