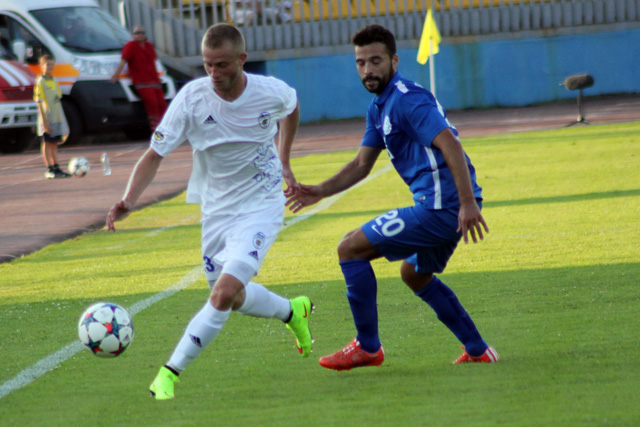 Amidst the financial problems that exist in a number of its clubs—as well as the fact that several clubs are still affected by the uncertain situation in the Donbass—the Ukrainian Premier League was barely able to find 14 clubs to start the 2015/16 season this last weekend. In fact, the final makeup of the league was not known until the day before the league started when the Ukrainian Premier League (UPL) decided that FC Stal Dniprodzerzhynsk, and not Illichivets Mariupol, would take the place of the now bankrupt club Metalurh Donetsk.

Illichevets has since announced that they will appeal the decision of the UPL at the Court of Arbitration for Sport in Lausanne. If Illichevet’s appeal is successful, the club could be re-established in the Ukrainian Premier League, even though the competition has already kicked off.

Meanwhile FC Hoverla Uzhhorod, another club that has been under intense financial pressure, surprised observers by finding the funding necessary to participate in the 2015/16 season. In fact Tribuna.com had already reported in February 2015 that the club was experiencing severe financial strain. When he spoke to Tribuna.com, the vice-president of the club Aleksandr Shufrych—who runs the club for his father, the Ukrainian parliamentarian and businessman Nestor Shufrych—admitted that in the past, some players had not been paid for 5 to 6 months. At the same time he also claimed that the club was in the process of paying off all its debts, and that investors were willing to step in to finance the team. Head coach Vyacheslav Grozny told Tribuna.com yesterday that he received his salary from July 2014 just a couple days ago.

Former Hoverla player Vyacheslav Akimov, however, told Tribuna.com on July 10 that players did not receive their salaries, and also that after a bad start to the 2014/15 season, players were forced to pay for needed equipment out of their own pockets. It is understandable that, Akimov wanted to leave the club hesitated because: “He [Shufrych] would only terminate the contract by mutual consent, and only if I forgive the club the debt [owed me].” Akimov also pointed out that he did not have access to his contract because after he signed the document, the club took it to register it with the federation, and never returned it to him.

On July 15 the Football Federation of Ukraine (FFU) barred the club from registering any new players. Furthermore, the FFU issued a recommendation to the UPL to exclude the club from the Ukrainian Premier League. The media therefore expected that Horvela, due to its financial status, and the fact that it was not allowed to register players, would be excluded from the Ukrainian Premier League (UPL). The UPL, however, never questioned whether Horvela would be participating in this year’s UPL season, and chose to exclude Illichevets instead.

Meanwhile, Serhiy Palkin, the general director of Shakhtar Donetsk, has been highly critical of the decision to exclude Illichevets from the UPL, and last week said, “It is obvious that they will continue to drag Stal [into the Premier League], because someone needs that,” thereby implying that there are other than sporting reasons for the decision.

Shortly after the league settled on the 14 clubs that would participate in this season’s UPL, Hoverla found a loophole in the transfer embargo issued by the FFU and signed 12 players on loan from Shakhtar’s biggest rival Dynamo Kyiv. Tribuna.com reported that these players are going to receive their salary from Dynamo whilst playing in Uzhhorod which effectively demotes Hoverla to the status of Dynamo’s farm team.

This sort of farm team system is not uncommon in Ukrainian football, as the major clubs Shakhtar, Dynamo, and Dnipro Dnipropetrovsk—Dnipro owner Ihor Kolomoyskyi owns several smaller clubs in the UPL—all have close ties to some of the smaller clubs in the Ukrainian Premier League. The fact that the UPL chose to exclude Illichevet, a club that is clearly in Shakhtar’s sphere of influence, over Hoverla, a club in Dynamo’s sphere, strongly indicates that Dynamo, and not Shakhtar, currently has the upper hand in Ukraine’s political football battle.