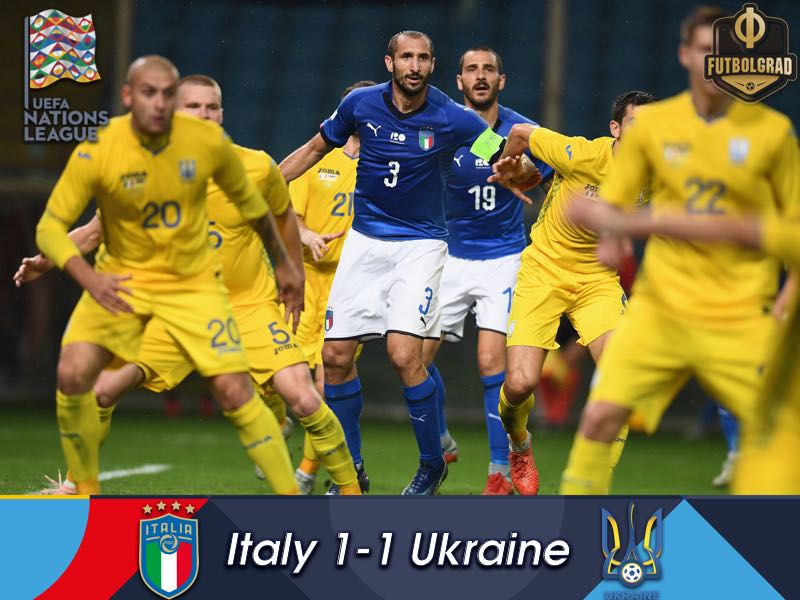 Ukraine impress in stalemate against Italy

Despite a dominant performance by the Italians, Italy v Ukraine ended in a surprise 1-1 draw. It seemed as if the Azzurri would run riot in this match, but alas this was not the case. Following the conclusion of this match, Italy now hold two unfortunate personal records: the longest winless streak in 38 years; and longest clean sheet drought since 1959.

Italy’s international woes continued as they were held to a 1-1 draw in Genoa. Despite maintaining the majority of possession, heavily outshooting their opponents and earning 15 corners to Ukraine’s three, the Azzurri were unable to defeat a well-composed Ukrainian side.

As expected, the Italians started the brighter of the two sides. The first opportunity of the match came in the 6’ when Marlos made a poor back pass to Yaroslav Rakitskiy. Federico Chiesa pounced on the loose ball and looked to be through on goal, but Mykyta Burda crucially intervened. The Italians took the resulting corner quickly, and Marco Verratti delivered a dangerous cross into the box. Leonardo Bonucci struck the ball on the volley, but Andriy Pyatov expertly saved and kept his side level.

Italy then had a second strong opportunity to open the score in the 22’, as Chiesa beat Karavayev on the righthand side. The Italian midfielder slotted the ball to Lorenzo Insigne, and the striker fired toward the goal. The ball beat Pyatov but flashed narrowly wide of the far post. After the half-hour mark, Chiesa had a second opportunity to open the score as he met a pass from Insigne, but Pyatov saved again. The resulting corner came to nothing.

Then, on the stroke of halftime, Ukraine had their first opportunity on goal. The Brazilian-born Marlos danced around the box and shot on goal, yet Gianluigi Donnarumma easily collected his tame effort. The match ended 0-0 at halftime.

At the restart, the Italians took the lead. After a nifty set of passing, Federico Bernardeschi collected the ball and fired toward the Ukrainian goal. Despite being 20 yards out, Pyatov made a mess of the shot as the ball bounced off his hands and into the back of the net. The Italians had dominated the match, and they were finally rewarded for their hard work. Italy 1-0 Ukraine 55’.

Their lead, however, was short-lived. Having briefly switched off after the goal, the Italian defence welcomed the Ukrainians. The Yellow-Blues led a counter attack, where Yevhen Konoplyanka passed to Roman Yaremchuk. The striker hit the ball cleanly, and Donnarumma was forced into a save that resulted in a corner. Konoplyanka deliver the ball into the box, which initially seemed to be over hit, but defender Burda headed the ball back into the box. Ruslan Malinovskiy met the ball and struck it on the volley. The ball bounced twice, rushing past the Italian blue and Ukrainian yellow shirts, and somehow beat Donnarumma. Against the run of play, Ukraine had equalised in the 62’.

The match, which originally seemed to be a foregone Italian victory, was turned on its head. Ukraine then nearly stole the show in the 71’ from a dangerous freekick. Malinosvkiy stepped up and fired the ball toward goal, and although his effort beat Donnarumma, the Ukrainian’s shot hit the underside of the bar and bounced harmlessly away from goal.

Following this attempt, neither side looked to have a serious chance on goal, and by fulltime the match ended 1-1.

Italy will be left wondering what they could have done better in this match. They dominated possession and shot on goal yet they were unable to break down their opposition. The Azzurri are now winless in their last five international matches in all competitions. Moreover, they earned only one point from a possible six in their first two UEFA Nations League matches against Portugal and Poland.

Something is missing in this Italian side, and they will need to resolve this quickly. Otherwise, should the Italians fail to earn a result on Matchday 3 against Poland, it is likely they will face relegation and be dumped into League B.

Ukraine, on the other hand, will be the happier of the two sides. The Ukrainians remain undefeated in 2018, having earned four victories and three draws in all competitions. Moreover, they won their first two UEFA Nation League matches against the Czech Republic and Slovakia. Given their performances, the Ukrainians will be confident heading into their final two League B – Group 1 matches.

The Ukrainians will now anxiously wait for October 13, which will see the Czech Republic and Slovakia go head to head. Should these two sides draw, Ukraine will know that three points from their remaining two matches will all but secure promotion to the UEFA Nation League’s prestigious League A.

Ruslan Malinovskiy was projected to be Ukraine’s player to watch in this match, and the young midfielder lived up to these expectations. Trailing 1-0 shortly after the restart, Ukraine kept their composure. Seven minutes after Italy scored, the Ukrainians found their response. Konoplyanka’s delivery found the head of Mykyta Burda, and the defender headed the ball back into the danger area. The ball then found Malinovskiy’s left boot, and the Ukrainian struck the ball on the volley. His shot took two bounces and beat Gianluigi Donnarumma, thus levelling the score. Malinovskiy nearly scored a second in the 70’ from a dangerous freekick, although his strike hit the underside of the bar. By fulltime, the match ended 1-1.

In August 2018, a section of the Marandi bridge in Genoa collapsed, killing 43 people. Before the start of this match, the Italian and Ukrainian national teams and their coaching staffs laid wreathes at the bridge. Then, during the international friendly, the match was paused during the 43’. The players, staff and fans took a moment to suspend the match and applauded in memory of those who had perished during the horrific accident. The message “Genoa in the heart” was displayed on the stadium screens.