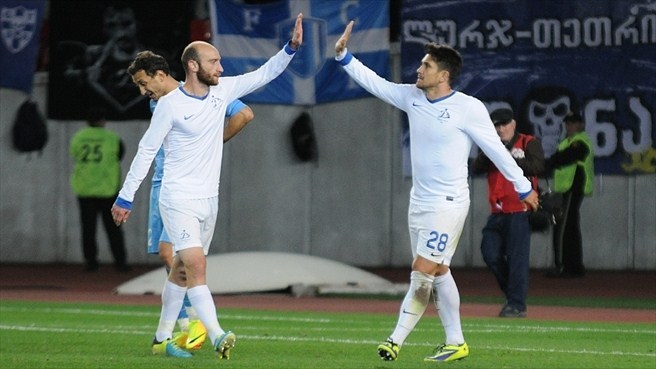 Georgian striker Jaba Dvali, once capped by his country, remains top-scorer in the domestic Georgian charts but he won’t be adding to that tally this season, as he returns to Moldovan club Dacia Chisinau with whom he spent two seasons in the late 2000s.

The Moldovan National Division sits one place above its Georgian equivalent, the Umaglesi Liga, in UEFA’s coefficient table, largely due to the exploits of Sheriff Tiraspol. For Georgian fans who remember the glories of Dinamo Tbilisi in the Soviet era and Georgia’s strong presence in the USSR national side, it is particularly difficult to digest that a move to Moldova may now be a genuine step up in the European football ladder.

Meanwhile, Dvali’s former teammate at Dinamo Tbilisi, the 34-year old Spanish forward Xisco, once of Valencia and Real Betis, also left Georgian football this week joining Gimnàstic de Tarragona, who compete in the third tier of Spanish football following three seasons as the biggest, and by some margin highest-paid, fish in an increasingly dry pond.

With 14 of the league’s 16 sides relying on state finances to operate, Ketsbaia, who left his post as Georgia head coach in November, declared Georgian football “dead” shortly before his final match in charge, a 4-0 dismantling at the hands of Poland.

That assessment was met with anger by the Georgian press, many of whom took part in a walk-out during a press-conference prior to the ill-fated Polish clash.

However, Ketsbaia’s claims appear well-grounded with the Jaba Dvali move to Moldova a particularly poignant reminder of how far Georgian football has fallen in the post-Soviet football food chain.