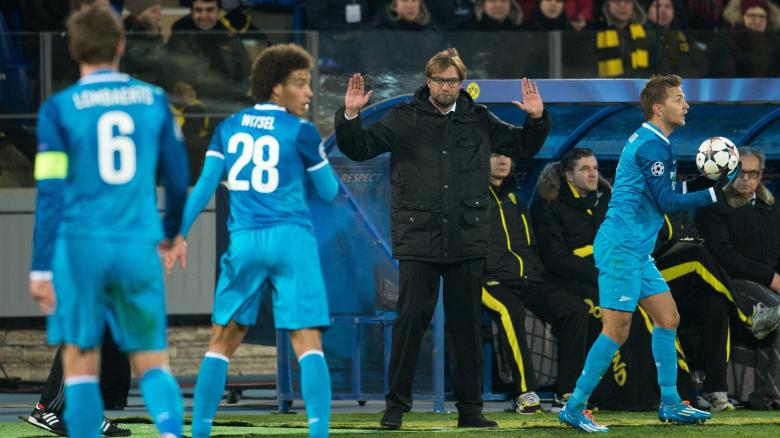 The story exploded like a bombshell. According to the Italian football journalist Gianluca Di Marzio, former Borussia Dortmund head coach Jürgen Klopp had been contacted by Zenit Saint Petersburg’s management in order to take over from their current the Portuguese coach André Villas-Boas.

Jürgen Klopp, who stepped down as the head coach of Borussia Dortmund this spring after seven successful years with Dortmund, is widely regarded as the most sought after free agent coach at the moment. Since stepping down at Dortmund, Klopp has been linked with Real Madrid, FC Bayern, and FC Liverpool. Earlier this summer Olympique Marseille, who wanted to hire him as a replacement for Marcelo Bielsa, offered him a contract. This was later confirmed by Klopp’s agent Marc Kosicke “Marseille was very interested, but for Jürgen the time is not yet ripe to start a new chapter in his career.”

Now Di Marzio writes that Zenit has approached Jürgen Klopp, “but that the demands [by Klopp] are high. There is talk of €15 million for him and all the staff.” Not only would that be too much for a club that is currently severely restricted due to Financial Fair Play regulations, but the club still has a coach under contract, and if Zenit were to fire Villas-Boas, terminating his contract would come with a stiff financial penalty.

In fact Zenit has since publically released a statement indicating their continued support to Villas-Boas, and his entire coaching staff. When Sport-Express spoke to Dmitry Zimmermann, press attaché of the club, on the matter, he replied: “what is the source of this information?” After he was told that the source was Gianluca Di Marzio, he responded: “If I am not mistaken, this is the “source”, which in recent months has sparked rumours that our midfielder Axel Witsel could join a leading Italian club? So if that is the case the commentary is fantasy, and not based on facts.”

Meanwhile, the Russian-based sports page championat.com ran a story that Villas-Boas could be replaced with the Belarusian coach Viktor Goncharenko, who recently fled Ural Yekaterinburg under mysterious circumstances.

But what will happen to Villas-Boas? The fact is that the Portuguese coach seems to be unhappy at Zenit at the moment, and as Sport-Express reported on August 29 that the coach had asked Zenit’s management to release him from his contract at the end of last season. Zenit had just won their first championship since 2012, but Villas-Boas and club management were in disagreement over the club’s transfer policy. Asked whether he was tired of working for the club Villas-Boas stated: “Talk with the club, we are on the preparation of the team. There are still three days before the completion of the transfer window. If we talk about the resignation, the end of last season was when I asked the club’s permission to leave the post, but they didn’t let me go. And so I continue to fulfill my contract professionally and with absolute dedication.”

Zenit’s results this season have been somewhat of a disappointment as the club currently ranks third in the table, having experienced two spectacular defeats—a 2-0 defeat against FC Krasnodar, and a 3-1 home defeat to recently promoted Krylia Sovetov Samara this weekend after which fans booed Villas-Boas, and asked for his resignation. Also Villas-Boas statement about wanting to leave the club at the end of last season may have already shattered the trust between the coaching staff, the players, and the club management. But Zenit may be forced to wait for Villas-Boas to officially hand in his resignation as the club may not be able to afford to pay the financial penalty that would come along with firing the coach. Therefore, while Jürgen Klopp remains a dream for many Zenit fans, the Financial Fair Play reality of the club means that they may be forced to either carry on with Villas-Boas or hire a cheaper alternative such as Goncharenko to replace him.