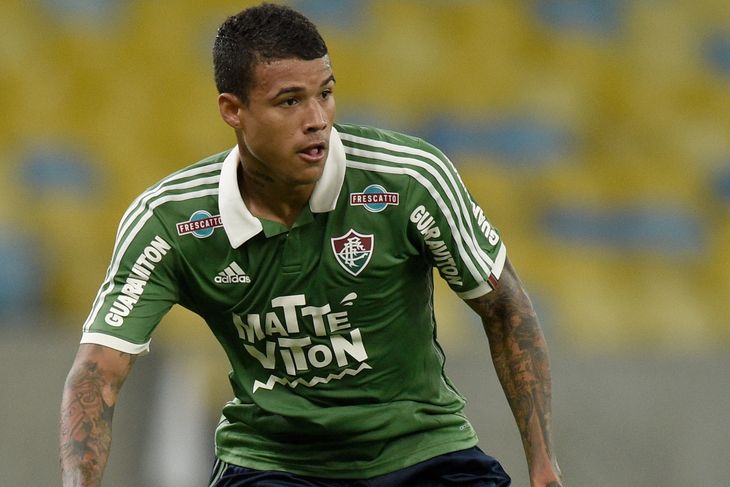 The London based football club Chelsea FC is close to signing their eighth Brazilian in the upcoming days, as the club has all but wrapped up a deal to bring in the 19 year old Fluminese forward Kenedy.

Kenedy, who is originally from the Brazilian city of Santa Rita do Sapucai, which is located in the state of Minas Gerais, began his youth career at 11 years of age at Friburguense Atlético Clube, in Rio de Janeiro. After short stints at Vasco da Gama, and Atlético Mineiro, Kenedy joined the Rio de Janeiro based club Fluminese.

Kenedy, alongside Marlon and Gérson, is part of an extremely talented trio at Fluminese, which has been linked to various clubs in Europe. Barcelona had a first-option agreement in place for both Kenedy and Gérson, but while Barcelona has now chosen to trigger its option on Gérson, they have also decided that the club would forego the option on Kenedy, which clears the way for Chelsea to conclude the transfer.

As Paulo Freitas wrote on Twitter: “Gérson looks the most talented of all [Gérson, Marlon, and Kenedy] and Kenedy the least one. Kenedy plays more often though as he is older/physically readier.” ESPN’s scouting report on Kenedy has compared the Brazilian’s physical qualities to those of Zenit Sankt Petersburg’s Brazilian power forward Hulk. At the same time, however, ESPN also suggests that Kenedy may in fact never play for Chelsea FC.

In recent years Chelsea has created an extensive loan network in Europe, with the goal to either produce talented players for Chelsea’s first team, or to make a profit on future transfers. In order to facilitate this, Chelsea’s owner Roman Abramovich has developed close connections with some European clubs.

As for the Dutch team Vitesse Arnhem, for example, he is rumoured to own the club via proxy, for the Dutch club was bought in 2010 by the Georgian businessman Merab Jordania, before the club was taken over by the Russian businessman Aleksandr Chigirinski. Both businessmen are rumoured to be linked to Chelsea owner Roman Abramovich, and in 2014 the Dutch newspaper De Telegraaf suggested that Vitesse was ordered to lose matches in order to avoid a possible qualification to the UEFA Champions League as UEFA does not allow owners to operate multiple clubs in a single UEFA competion.

Speaking to De Telegraaf, Jordania, who is currently the chairman of the club, said, “I wanted to be the champion with Vitesse, but London would ultimately not allow it. Having ambition is fine, but we were told Vitesse could not be in the Champions League with Chelsea.”

Currently, Vitesse has three Chelsea players signed in loan deals, including Nathan, another young Brazilian who was signed by Chelsea signed this summer, and who has recently been sent on loan to the Dutch club. Roman Abramovich also has close business contacts with the Portuguese club Sporting Lisbon, where at one point he allegedly held the partial rights of nine players through proxy companies.

For Chelsea, the best case scenario of course, would be for the player to develop into a star attraction, who can play regular minutes in the English Premier League at Chelsea’s stadium the Stanford Bridge, or to develop into a player who can be sold at a profit to another club—as Chelsea has successfully been able to do with players such as Kevin de Bruyne or Thorgan Hazard.

The story of Kenedy highlights the fact that that the biggest European clubs have now begun to purchase players not just as a means to improve the strength of a squad, but also to ensure future financial windfalls, which makes the game of football in the 21st century often more akin to the manuevers of a stock exchange rather than a contest involving the prowess of 22 men.