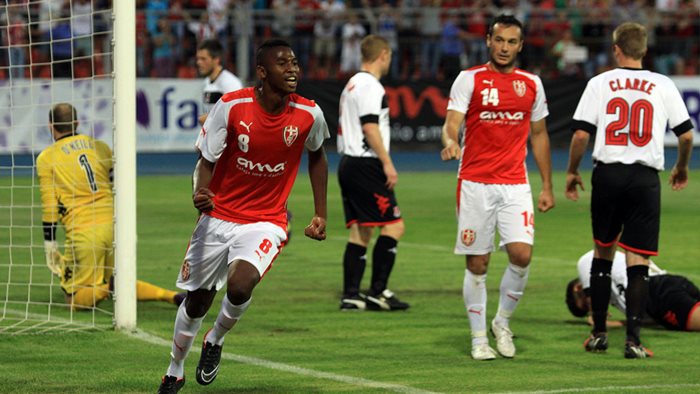 Russia’s Sport-Express reported on Monday that the KF Skënderbeu Korça players were promised €100,000 by the club’s president Ardian Takaj for a positive result in their Europa League match against Russia’s Lokomotiv Moscow.

Takaj is largely responsible for Skënderbeu’s recent successes both at home, and as of this year, also in Europe. As Sean William writes in his excellent article on Albanian football for The New Yorker, Takaj has brought success to the club “after years of Communist ruin … with a tried-and-tested [football] formula: bags of cash.”

Under Takaj’s rule, Skënderbeu won their first Albanian Kategoria Superiore title in 2011—their first title since 1933—and have since won the league four more times. The club’s backbone consists of Albanian players, but Takaj was also able to add several South American and African talents such as the 19-year-old Nigerian striker Peter Olayinka, the 20-year-old Malian midfielder Bakary Nimaga, and the 24-year-old Brazilian playmaker Esquerdinha.

These three foreigners are perhaps Skënderbeu’s most talented players, and as is often the case for clubs from smaller Eastern European clubs, are most likely using Skënderbeu’s participation in the Europa League as a stage to show off their talent to the more lucrative clubs in Europe’s bigger competition. Despite Skënderbeu’s standing in Albania—according to Transfermarkt.de the team is the most valuable in Albania—the squad’s overall transfer value of €6.08 million is peanuts compared to Lokomotiv Moscow’s overall transfer value of €87.75 million, and it is expected that Locomotiv will easily defeat Skënderbeu on Thursday.

Lokomotiv are currently in fine form as the club sits on second spot in the Russian Football Premier League, and after a spirited 1-1 draw with current league leader CSKA Moscow, even look like a title challenger in this year’s RFPL. Furthermore, Lokomotiv also won their first group stage match in the Europa League in convincing fashion by beating the Portuguese club Sporting Lisbon 3-1 in Portugal.

Under those circumstances, it is not surprising that Takaj has resorted to adding a bit of extra motivation before this week’s Europa League match. In the past, Takaj has used financial incentives for extra motivation with some success. Takaj promised €500,000 to his squad before Skënderbeu’s third-round Champions League qualifier against Moldova’s champion FC Milsami Orhei, and they subsequently beat the Moldovan’s 4-0 on aggregate (2-0, 2-0). But Takaj’s financial rewards are not always enough; even the €1 million he promised to his players to beat Croatian champion Dinamo Zagreb, and to progress to the Champions League, were not enough to compensate for the talent gap between the two clubs. Dinamo beat the Albanians 6-2 on aggregate (4-1, 2-1).

While the Champions League appeared to be a step too far, participation in the group stage of the Europa League will be a major milestone for the Albanian club. Indeed, a group that includes Sporting Lisbon, Beşiktaş Istanbul, and the above-mentioned Lokomotiv, has the distinct feel of a Champions League group. The downside of such a draw is, of course, the fact that Skënderbeu will find itself heavily outgunned in all group stage matches.

But those who expected that Skënderbeu wouldn’t be competitive were surprised when the Albanians battled hard in their first group match against Beşiktaş, and only lost narrowly 1-0 at the Elbasan Arena (Skënderbeu Stadium is considered to small for Europa League matches).

This result is somewhat of a warning for Lokomotiv, and as I wrote in our Europa League preview, a slip up in Albania from any of the group favourites could prove to be the decisive difference between qualifying for the next round, or a spring without European football. Lokomotiv should, therefore, take Takaj’s financial motivation serious, and concentrate on getting the job done against this spirited Albanian team.