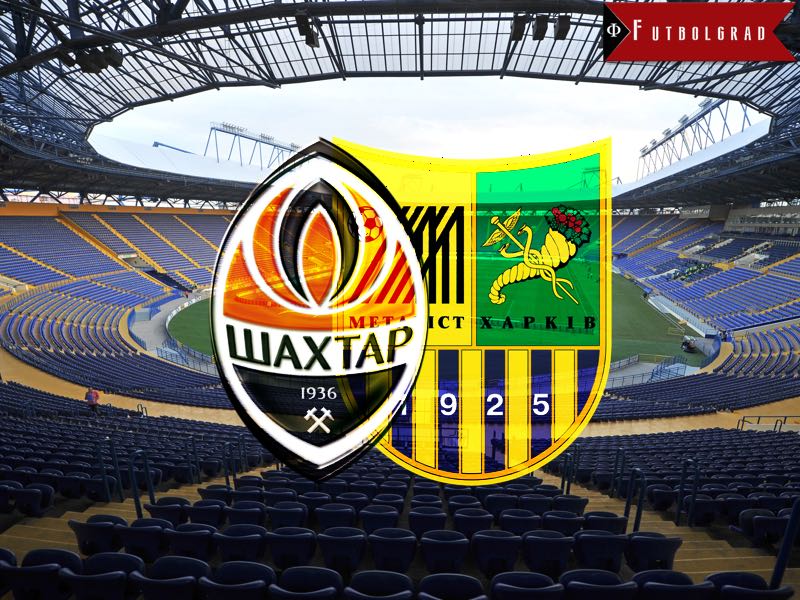 Last summer, following the insolvency and subsequent withdrawal from the Ukrainian Premier League of FC Metalist Kharkiv, Ukraine’s second-largest city was left without its own top-flight football club for the first time in over a decade. In fact, since their promotion to the Soviet Vysshaya Liga in 1982, Metalist had only spent a total of five seasons removed from the uppermost division of the Soviet and later the Ukrainian football pyramid—a four-year stretch in the mid-1990s and in the 2003-04 campaign.

Beginning with the mid-2000s, Metalist had firmly established themselves as the third power in Ukrainian football, behind the perennial leaders, Shakhtar Donetsk and Dynamo Kyiv, and ahead of longstanding rivals, Dnipro. The club regularly took part in European competitions and reached the quarterfinals of the 2011-12 Europa League. Metalist was one of Ukraine’s most popular teams, and Kharkiv was one the country’s great football cities. The newly renovated stadium hosted three matches during Euro 2012.

It all began to unravel in the wake of Ukraine’s 2014 revolution. The club’s owner, Serhiy Kurchenko, who had purchased the club under murky circumstances two years previously, fled to Moscow. Kurchenko, an ally of deposed president Viktor Yanukovych, had his assets frozen but remained in control of the club. The controversial owner stopped financing the club, however, and after a prolonged financial crisis, Metalist were eventually expelled from the Premier League due to unpaid debts following the conclusion of the 2015-16 season. But despite the disappearance of its top-flight club, high-level football has returned to the city.

A Ukrainian Derby in Kharkiv

Shakhtar Donetsk, in exile since 2014, have held their home matches in the far-western Ukrainian city of Lviv, over 1,000 kilometers away from the war-torn city of Donetsk. Despite solid support for the Hornyaki when they take on foreign opposition in European competitions, their reception in Lviv overall has been lukewarm at best. During Ukrainian derby matches with Dynamo that take place in Lviv, the nominally away side enjoy the overwhelming share of support.

Shakhtar moving to Kharkiv has meant a return late European nights to the Metalist Stadium. (Photo by Genya Savilov/EuroFootball/Getty Images)

Shakhtar players have, on occasion, voiced their discontent with the lack of support in Lviv and, for the first encounter with Dynamo this season in September, the club’s management decided to change the venue to the vacant Metalist Stadium. Kharkiv is far closer to Donetsk— geographically, culturally, and linguistically—and has also become home to many internally displaced persons who have fled the Donbass region.

Shakhtar’s decision has paid off. Kharkiv supporters, left without their own Premier League side, flocked to the match. Nearly 40,000 fans were turned out to witness a 1-1 draw between the sides, a virtual sellout and the highest attendance for a UPL match in the past two seasons. The vast majority of those in attendance supported Shakhtar, as the crowd’s response to their second half equalizer plainly demonstrated. What was once the norm for Shakhtar in their fierce encounters with their enduring rivals was now a welcome luxury.

Nevertheless, the home crowd’s sympathies during the match could not mask their true loyalties. Stadium-wide chants of “Metalist! Metalist!” were an emphatic reminder that, while Shakhtar were welcome guests in Kharkiv, there was only one real home team.

Speaking to Tribuna journalists after the match, a number of locals expressed the same sentiment: “It’s nice to watch high-quality football, but it can’t replace Metalist.”

In an interview with Tribuna later that month, Shakhtar’s general director Serhiy Palkin said he was wholly satisfied with his club’s experience at the Metalist Stadium but stressed that Shakhtar had no plans to relocate to the city permanently: “I don’t want us to be accused of replacing Metalist,” he said.

Despite Palkin’s assurances, Shakhtar did end up moving to Kharkiv permanently, or at least until the end of the season. He claimed that he spoke to the Metalist ultras and insisted that they had no issues with Shakhtar’s move. The ultras disagreed.

The Metalist hardcore support had already stated their opposition to Shakhtar’s presence at their home ground before September’s derby and had threatened to disrupt the match. No such disruptions occurred. A permanent move, however, was too much to stomach.

In an open letter published on their V Kontakte page, the Metalist ultras openly expressed their disgust at the situation. They stated that they had never acquiesced to Shakhtar’s move during their meeting with Palkin. Their ire was directed mainly at the club’s administration and especially toward owner, Rinat Akhmetov, citing their lack of patriotism and alleged sympathies with the Russian-backed separatists. Even Shakhtar’s players were targeted—the side’s Ukrainian players were singled out for not being sufficiently patriotic and derided as “prostitutes in boots.” 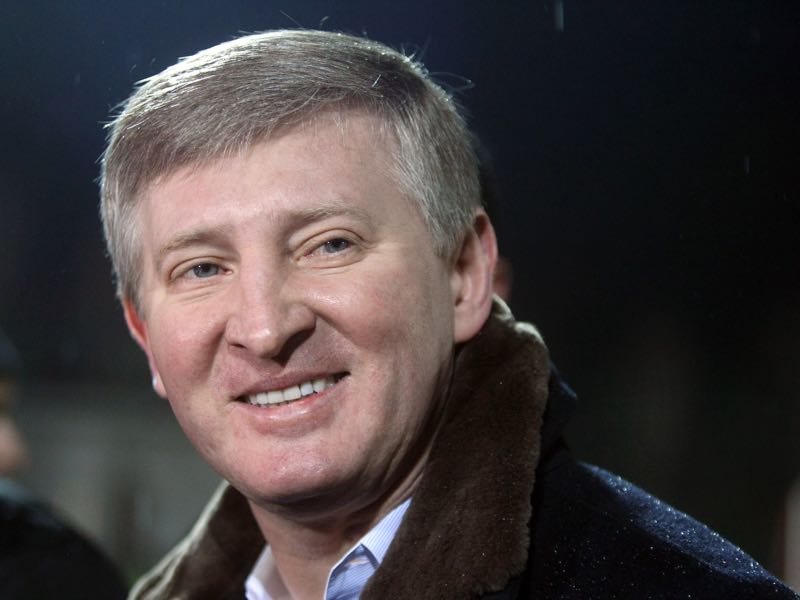 Not all Metalist fans were happy with Rinat Akhmetov’s decision to move Shakhtar to Kharkiv. (Alexander KHUDOTEPLY/AFP/Getty Images)

During Shakhtar’s Europa League match against Celta Vigo in February, their first in Kharkiv since the move, Metalist ultras unveiled a banner with the words “Kharkiv without Akhmetov.” The club’s newly opened fan shop at the Metalist stadium was vandalized with blue and yellow paint, the colors of the Ukrainian flag, in another not-so-subtle indictment of Shakhtar’s insufficiently pro-Ukrainian position.

The ultras, however, do not form the majority of Kharkiv’s football supporters. As the support for Shakhtar during September’s derby and since their relocation suggests, the views of the hardcore fanatics are not representative of the average football fan in the city.

Oleksandr Yaroslavskiy, Metalist’s former owner, is also in favor of Shakhtar’s presence in Kharkiv. Yaroslavkiy is widely respected in Kharkiv and is largely credited with Metalist’s success over the past ten years, with his controversial sale of the club to Kurchenko considered by many to be the beginning of their eventual downfall.

Shakhtar are now not the only occupants of the Metalist Stadium. After the club’s expulsion last summer, two emerged in its place: SK Metalist, which remains under the control of Kurchenko, and Metalist 1925, who have no formal links with the old regime.

Nevertheless, it is Metalist 1925—named after the year of the original club’s founding—that have been adopted by many of the Metalist faithful as the club’s legitimate successor. Currently competing in the Kharkiv region’s amateur league, Metalist 1925 have applied for а license to take part in next season’s Druha Liha, the third division in Ukrainian football and the lowest professional one. 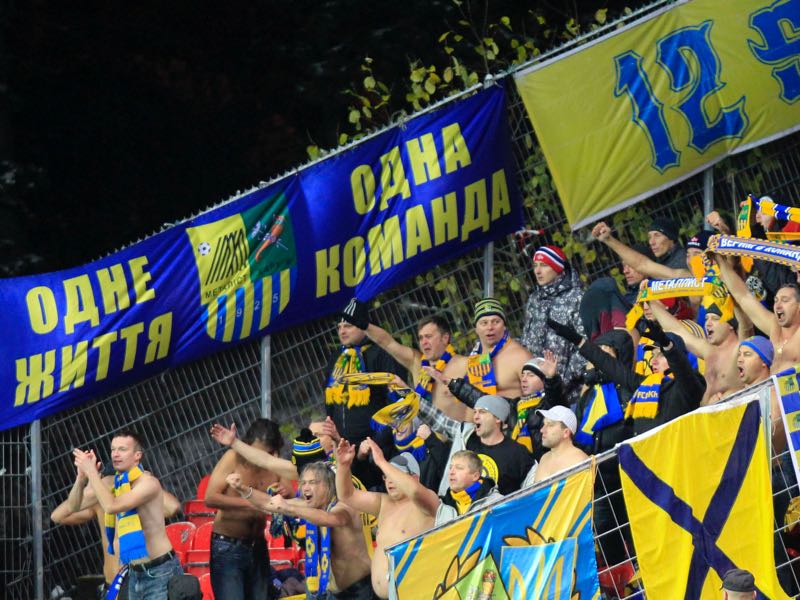 Metalist Kharkiv fans can be hopeful for a brighter future. (Photo by Daniel Sannum Lauten/EuroFootball/Getty Images)

The management have declared their goal to “return” to the UPL in four seasons—a curious choice of words given that the club have technically never competed above the amateur levels. But, even at the amateur level, the support has been incredible. Over 9,000 fans witnessed Metalist 1925’s 1-0 defeat of Solly Plus earlier this month.

Their average attendance is 5,346. This is over 1,000 higher than the Premier League average and below only Dynamo, Shakhtar, and Chornomorets. Most UPL sides can only dream of this level of support.

In March, the Shakhtar and Metalist 1925 management jointly contacted the Football Federation of Ukraine and the Association of Amateur Football of Ukraine to make sure that scheduling conflicts are avoided, as they share a home ground. In the depressing world of Ukrainian football, there is something uplifting about this level of cooperation between the country’s richest club and an upstart amateur side in its first year of existence.

Football in Kharkiv this season has not been limited to Shakhtar and Metalist 1925. Ukraine’s 2-0 friendly victory over Serbia in November was the first national team match held in Kharkiv in three years. A planned friendly with the United States in May of 2014 was moved to Cyprus due to security concerns in the wake of the revolution. In addition, Kharkiv will host the Ukrainian Cup final in May and is also the possible venue of Ukraine’s critical World Cup qualifier against Turkey in September.

In spite of the loss of Metalist as a professional club, Kharkiv remains a football city. Shakhtar have been warmly received—not as a replacement for Metalist, but as welcome guests—and as the stunning support for amateur Metalist 1925 reveals, the city craves a successful club to call its own. Ukrainian football seems to be in continued decline throughout the country but, all things considered, Kharkiv is doing quite well.