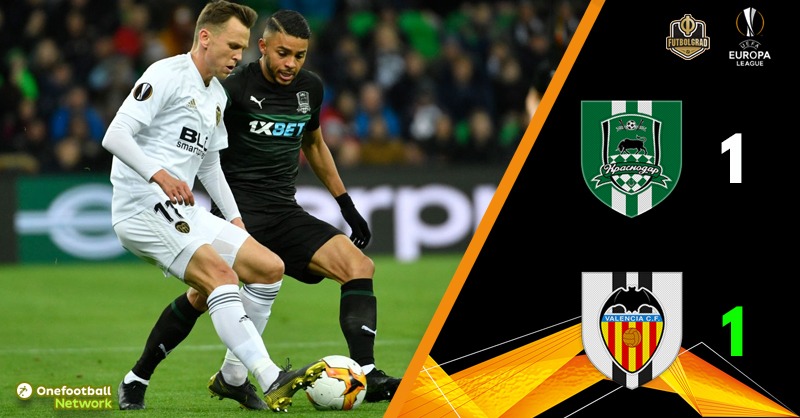 Krasnodar v Valencia had all the drama one wants from a tightly balanced match with the Spaniards winning the game with the last kick of the game.

It was almost a perfect start for Krasnodar with Ari scoring in the 11′ minute. But to the shock of most of the spectators at the Stadion Krasnodar, the goal was called back as the Brazilian striker had handled the ball inside the box.

As it stood, Krasnodar continued to chase the 1-2 deficit from the first leg. They did so by playing their usual possession style football quickly transitioning through the centre of the park whenever winning the ball trying to spring their fast attacking line centred on Ari, Kristoffer Olsson and Wanderson.

It was a plan that promised to work well but was thrown into disarray when Ari had to go off with an injury in the 30′ minute. In his stead, Dmitry Stotsky came on, which meant that Wanderson now had to act as the lone forward. In the tactical chaos that ensued Valencia produced their first chance in the 31′ minute when Carlos Soler tested Matvei Safonov after a fantastic Denis Cheryshev cross.

“Nuzhen gol, nuzhen gol” (we need a goal) was the repetitive chant from the Krasnodar supporters. But despite mostly controlling the game the Bulls did not find a way through. Moments from the second half kickoff, in the 48′ minute, the chants were almost answered. Cristian Ramirez was brought down on the edge of the box, and Brazilian keeper Neto in Valencia’s goal had to do very well to keep out Mauricio Pereyra’s freekick.

Valencia, however, also had chances. Cheryshev, 54′ minute, tested Safronov from the right corner of the box and Rodrigo, 58′ minute, was given to much room at the edge of the box but missed the target entirely. But overall Valencia struggled to find a way out of Krasnodar’s relentless pressure.

At the same time, Krasnodar struggled to create anything tangible. It was a finely balanced tie that at a heartbeat could go either way. That moment appeared to have arrived when Wanderson was given to much room on the edge of his box, his shot had Neto beat, but to the dismay of the Krasnodar, supporters kissed the outside of the post of Valencia’s goal.

Time was ticking out for Krasnodar. But the Russians have goalscoring sensation Shapi Suleymanov. The teenager can come off the bench and make a difference at a heartbeat, and he did exactly that scoring in the 86′ minute with a brilliantly curled effort from the edge of the box that gave Krasnodar the lead. It should have been the winning goal, writing another piece of brilliant history.

But in the 92′ minute Valencia silenced the ground. Kevin Gameiro broke through on the right and played a fantastic ball back into the box where Gonçalo Guedes was left wide open allowing to score the equaliser that killed off Krasnodar’s quarterfinal hopes.

Shapi Suleymanov was once again the difference maker for Krasnodar this season. The young boy from Dagestan can come off the bench and make an instant impact right away. This time it was his incredible strike in the 86′ minute that saw Krasnodar advance against a strong Valencia side. Sadly for Krasnodar, and Shapi Suleymanov it was not meant to be, in the final minute, with the final shot Gonçalo Guedes snatched it all away. 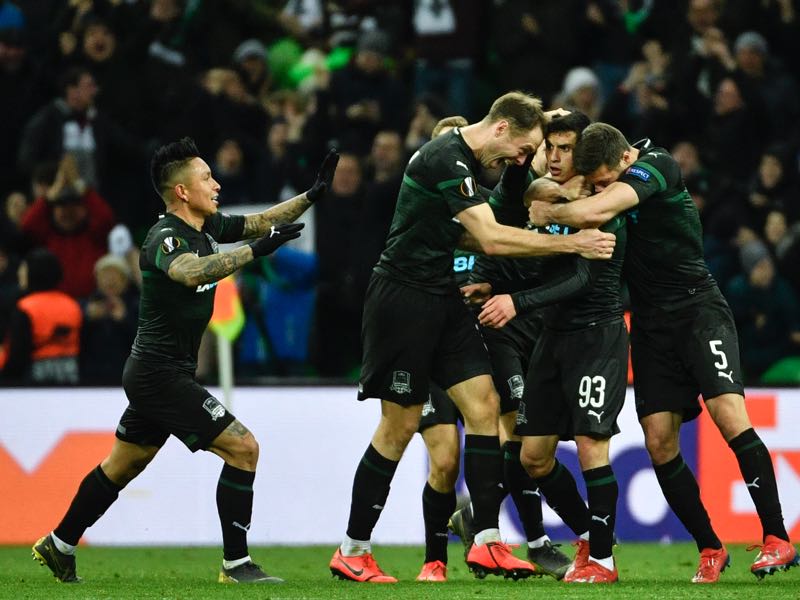 Krasnodar cannot get past this stage of the competition. The Russian side played very well over the full 180 minutes against Valencia and almost made it happen but a very last second goal shatters the dream of a side that only has existed for ten years.