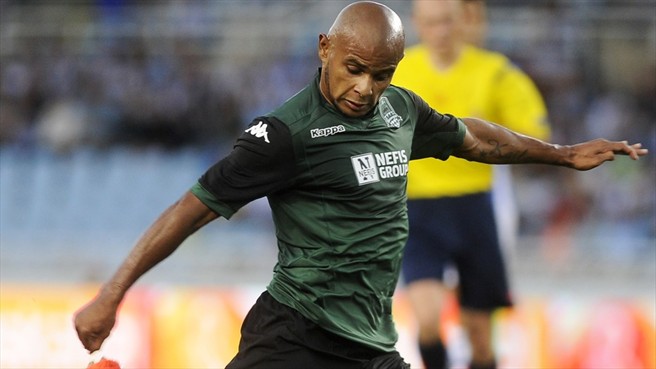 FC Krasnodar’s Brazil-born forward Ari may be a Russian citizen by the end of the year. Having married Russian Natalia Gryzlova in December 2014, the player soon applied for a Russian passport which he is expecting to receive in the near future. “We haven’t heard anything from the Russian authorities since submitting the documents in March. However, we hope to get the passport by the end of the year,” the player’s agent, Oliver Cabrera, said recently.

Russian citizenship for Ari will undoubtedly aid his club. Currently, only six foreign players (with foreign meaning anyone not eligible to play for Russia) are allowed on the pitch at once, and many Premier League clubs—Krasnodar included—operate very close to this limit. That Ari will no longer be one of the six gives his manager an extra option—both last season and this, Oleg Kononov has often picked either Ari or fellow Brazilian Wanderson in attack, but after the winter break it should be possible to start both.

There is also the possibility of a call-up to the Russian national team: both Euro 2016 and the domestic 2018 World Cup would be realistic targets for the 29-year-old. Former Russia manager Capello, when he was still in the job, said Ari was good enough to play for Russia, and when the announcement about Ari’s citizenship application came in March of this year, plenty of fans seemed to agree. Sample comments from the championat.com website included:

He’s a good passer: could organise our attacking game, dribbles well and has a good shot.

I think he’d be good for the national side. I don’t understand all this hurrah patriotism about only ethnic Russians being in the team.

That, however, was all last season: Ari finished it with fourteen goals in all competitions and appeared alongside Hulk and Ezequiel Garay in respected newspaper Sport Express’ ‘team of 2014-15’. Fast forward to 2015-16, and he hasn’t scored in fifteen games and is finding it difficult even to get onto the pitch, thanks largely to a rejuvenated Fedor Smolov—whose form has seen him return to the Russian national set-up. Fan reactions to the possibility of Ari playing for Russia now are noticeably lukewarm.

But form is, of course, temporary. Ari might rediscover it and, come next spring, be in the frame once again. Alternatively, he might never get back to what he was and be forgotten by Russia, but nevertheless do a decent job for his club and live happily in the country as a Russian citizen. As a football fan, it’s easy to look at citizenship merely as a qualification which enables one to play (or not) for a team, when it is far more than that. When pointing out that Krasnodar wouldn’t be getting involved in Ari’s citizenship application, the club’s spokesperson was spot on in saying that citizenship is “a personal matter for each individual.”