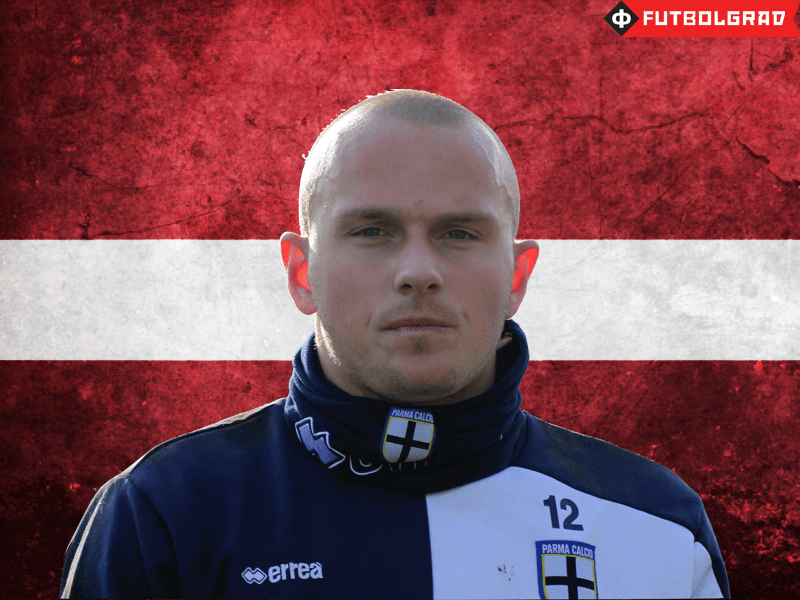 2,170km from home in the semi-professional fourth tier of Italian football may not be a likely place to find the potential goalkeeping future of Latvia. It is possible, however, that, in this wilderness, a Latvian goalkeeping sensation is just what you will find.

Over the course of the 2014-15 season, the Italian club, Parma, made national and international headlines regarding the club’s finances. A year on from achieving an unlikely qualification to the Europa League, following a sixth place finish in Serie A, the Crociati (Crusaders), as they are affectionately known, were on the brink of liquidation. Appalling ownership, coupled with lax oversight by the national association (FIGC), had seen the club rack up a staggering amount of debt, believed to be somewhere in the region of €200,000,000.

Needless to say, this crippling debt eventually saw the club fold at the end of the campaign. It is inconceivable, however, that a historic club like Parma, whose name is instantly recognized by many around the world, would be allowed to just fold and disappear from the scene altogether. Over the summer of 2015, a new club was founded under the moniker of Parma 1913 and were quickly bestowed with the honor of being Parma FC’s legitimate heir. Basically they were seen as the same club.

The resurrection of Parma Calcio has been greeted with enthusiasm – Image via parmacalcio1913.com

The latest incarnation of the club quickly entered into Serie D (fourth division) and began the journey of returning Parma to where it belonged—the Serie A. Fans quickly got behind the club and before long over 10,000 season tickets were sold, a monstrous amount in a division where attendances often struggle to reach the high hundreds.

With the shell of the club in place and the fans on board, only one thing remained to be done—assembling a squad that would be able to compete. At the heart of the squad would be Alessandro Lucarelli—brother of the former Shakhtar Donetsk striker and adherent communist Cristiano Lucarelli—club captain and legend who had agreed to stay after the club’s demise. Soon trials were held and players were signed, with the Parma name still able to draw in the best at this level.

Before too long, the position of keeper came into focus. A rule at this level states that the first team squad must have a certain number of players in the 16 to 18 year old age bracket. It was from this age group that Parma decided this player would be drawn and, in the end, the club chose an 18-year-old Latvian by the name of Kristaps Zommers.

Zommers’ name was met with blank faces by local journalists who scrambled to find out something about the team’s new number one. This was hampered by Zommers’ inability to speak Italian, and by all his early interviews being conducted in English. What they did find out was that he had previously been on the books of Aarhus GF in Denmark and had won numerous caps at under 17, 18 and 19 for Latvia.

Some doubts about him remained, however, and many wondered what to make of this young keeper, who couldn’t speak Italian. Journalists wondered how he would communicate with his defence. But any doubts were quickly extinguished, as Zommers has done far more than just hold his own and has become one of the stand out players of the season so far.

Off the pitch as well, he seems to have settled in—he now confidently conducts interviews in Italian only a few short months after the time when he was reluctant to utter the simplest of phrases.

Kristaps Zommers is no longer an unknown quantity to journalists in Parma – Image via gazzettadiparma.it

Back to matters on the pitch; Zommers has been exceptional. In his 25 appearances in the league so far he has kept 17 clean sheets conceding only ten times and Parma are now seven points ahead of second placed Altovicento. Zommers also displays skills that have, at times, almost single handedly won the club games.

Naturally for a keeper, you would expect his shot stopping ability to be on point and that, most certainly, is the case for him. His command of the area has also been improving steadily, helped by the experienced pair of Alessandro Lucarelli and Luca Cacioli in front of him. He can, at times, be slightly rash or hesitant to come from his line, but that can be forgiven in a player who only very recently turned 19.

Also, his kicking can be suspect every so often, but the positives hugely outweigh any minor negatives. His abilities, in fact, have gained him plenty of recognition so far this season, first with the Latvian U-19 squad and second with the Serie D youth squad—an all-star team that encompasses young players from all nine Serie D groups.

How Far Can Kristaps Zommers Go?

The one question that remains is: How high can Kristaps Zommers go onto play? He has proven himself in the Serie D. The next step would be the Lega Pro (third division). If Parma do get promoted, which looks likely, chances are that Zommers will be number one again next year. And again, from what people have seen of him this season, he will surely take the step up in stride.

After that, it is harder to tell. As has already been mentioned, he has only recently turned 19. Because of his age, he has the potential to develop exponentially in the coming years before he reaches his peak. If Parma do continue to rise easily through the leagues, the question may arise whether or not, they will want to bring in a keeper with more experience at a higher level. 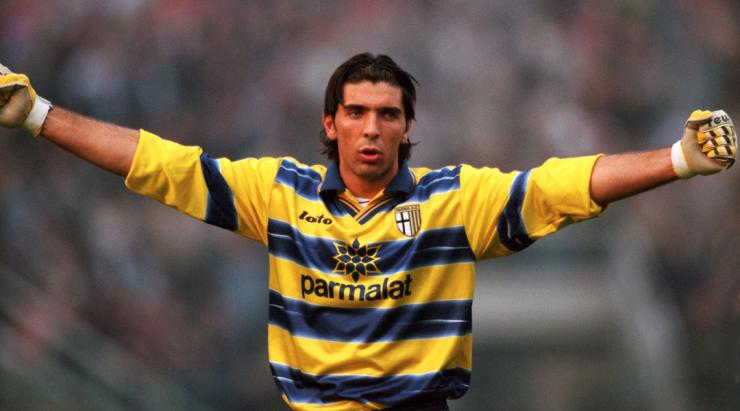 Can Kristaps Zommers follow in the footsteps of club legend Gigi Buffon? – Image via fourfourtwo.com

For the club, stagnating in the third division would be disastrous, but for Zommers it may be what he needs so that he can continue to garner more experience. Whatever happens, Zommers is possibly at one of the best places at which he can learn his trade. This is, after all, the club that produced and nurtured Gianluigi “Gigi” Buffon, and it is also where the Brazilian legend Cláudio Taffarel made his first strides in European football.

More recently the club has launched and re-launched the careers of Sébastian Frey and Antonio Mirante respectively. Can Zommers reach the top of the game and become the future of Latvian goalkeeping? It is hard to say. If it is to happen though, starting off in the unglamorous fourth tier of Italian football may strangely be the best place to begin. If he does succeed, Zommers will most certainly continue Parma’s strong goalkeeping tradition.

Kevin is from Ireland and has a passion for Italian football. He writes for the websites Italian Football Daily and The Gentleman Ultra. Follow him on Twitter @Kevinnolan11