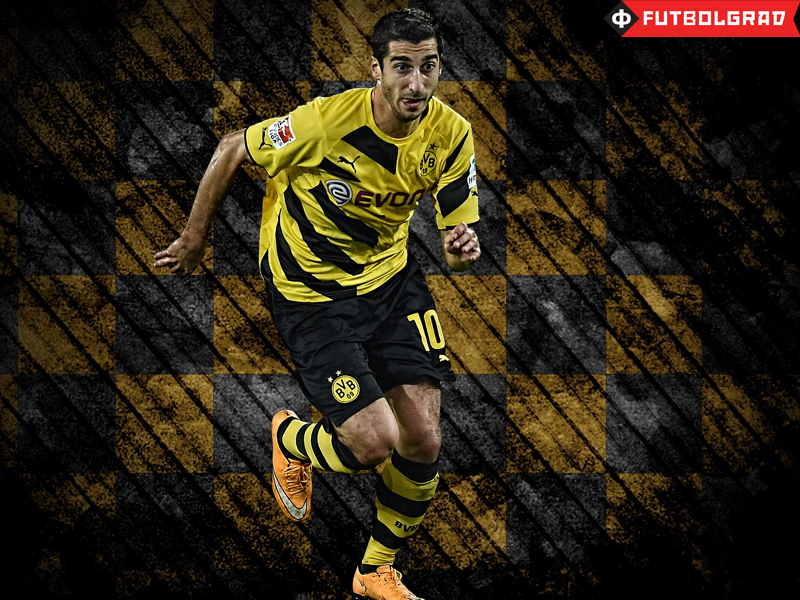 This week has been a whirlwind for Henrikh Mkhitaryan and Borussia Dortmund. On Thursday, Dortmund faced Liverpool FC, a match that was very much marked by the emotional return of their former coach Jürgen Klopp, who now coaches Liverpool. The match ended 1-1, leaving it all to play for next Thursday at Anfield.

Between those two matches Dortmund had to play the biggest derby in German football, the Revierderby Schalke 04 vs Borussia Dortmund, which ended in a 2-2 tie with Mkhitaryan coming off the bench. A result that will make Liverpool vs Borussia Dortmund even more important for the Yellow and Black, and the Armenian midfield dynamo Henrikh Mkhitaryan will be a key component in Borussia’s coach Thomas Tuchel’s plans to ensure that Dortmund can go on to the semi-final of the Europa League.

Henrikh Mkhitaryan Has been World Class this Season

Henrikh Mkhitaryan, who was bought from Shakhtar Donetsk in the summer of 2013 for a club record sum of €27.5 million, had a difficult first two seasons at Borussia Dortmund, but has been outstanding ever since Thomas Tuchel took over as the coach of the yellow and black this summer. 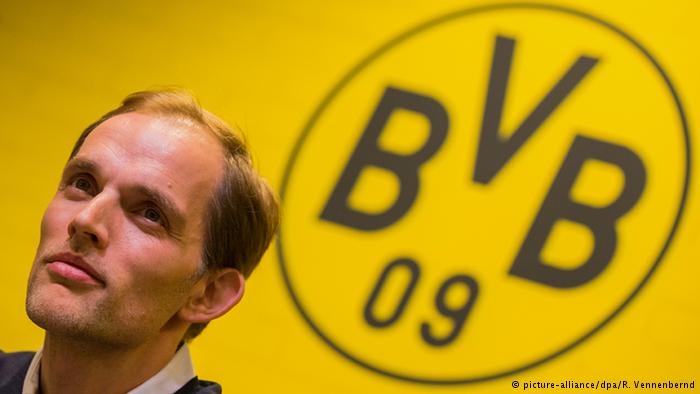 During the winter, the offensive midfielder, who mostly plays as a winger under Thomas Tuchel at Borussia Dortmund, was voted by the German Kicker Magazin as second best winger in German football after fellow Shakhtar Donetsk graduate, Bayern Munich’s Douglas Costa.

Back in the winter, the Kicker wrote, “The officials at Borussia Dortmund have always been aware of Henrikh Mkhitaryan’s fantastic skills. But now under Thomas Tuchel, Mkhitaryan’s potential is finally unfolding; the Armenian has been involved in 34 goals in the competitions that he has played for Borussia Dortmund.”

But while Douglas Costa’s form has dipped since the winter—the Brazilian has lacked in efficiency in recent games, and is unlikely to be categorized as World Class in the summer by the Kicker—Mkhitaryan has maintained his form, and has been a vital part of Borussia Dortmund’s unbeaten run in the Bundesliga in the second half of the season. 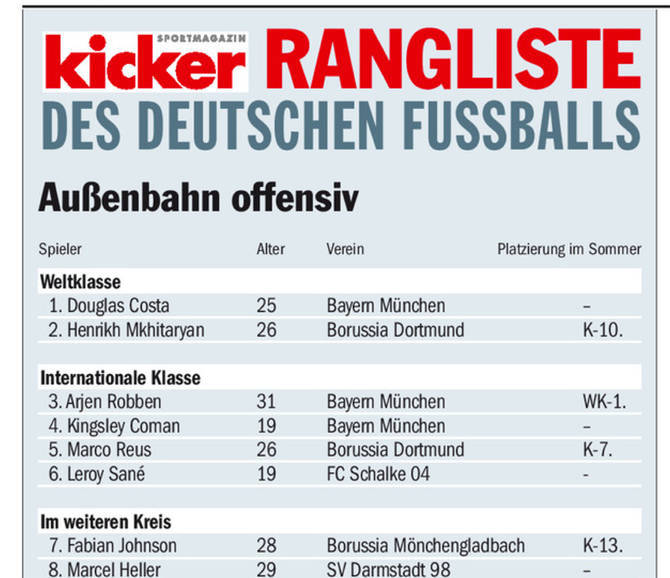 Mkhitaryan was ranked second among wingers in the winter, but has since surpassed Bayern’s Douglas Costa – Image via Kicker

In 28 Bundesliga games for Borussia Dortmund this season, Mkhitaryan has scored ten goals and added 16 assists, in the process earning an average whoscored.com score of 7.89. With 26 scorer points, Mkhitaryan is ranked fourth in the Bundesliga behind teammate Pierre-Emerick Aubameyang (29 points), and the Bayern Munich strikers Robert Lewandowski (28 points) and Thomas Müller (26 points).

In addition, Mkhitaryan also ranks fourth in the Kicker grade ranking (with one being the best, and six the worst) with an average grade of 2.63 in all Bundesliga matches—ranked behind Hamburger SV’s René Adler (2.57), Bayern’s Thomas Müller (2.58), and FC Augsburg’s Marvin Hitz (2.59).

Those numbers, of course, only tell half the story as they don’t show why Mkhitaryan has been Dortmund’s most valuable player after Aubameyang this season. His skill sets have been most recently apparent in the Europa League encounter against Tottenham Hotspur, which ended up being a comfortable 3-0 victory for Dortmund, where Mkhitaryan playing as a winger would often drop between Tottenham’s defensive lines to redistribute the ball to Dortmund’s other three attacking players.

Hence, even when nominally placed on the wing, Mkhitaryan often plays the role of a wide playmaker, or for you Football Manager players out there, as a wide target man. At times, his play can also be compared to that of Thomas Müller’s role as a Raumdeuter. Indeed, Mkhitaryan has shown in the past that he, like Müller, can be used as a goal scorer as well—Mkhitaryan, at 26 goals, holds the record of the most goals scored in the Ukrainian Premier League.

At times, these skills were already visible under former Borussia coach Jürgen Klopp, but Klopp failed to get the best out of Mkhitaryan, and it even appeared that the Armenian could leave the club at the end of last season. But then Klopp left, and new coach Tuchel personally convinced Mkhitaryan to remain in Dortmund, as Borussia’s new coach was convinced that Mkhitaryan could become the key component in his tactical system.

First Liverpool vs Borussia Dortmund – Then the Contract Extension

Mkhitaryan’s contract expires in 2017, and there have been questions as to whether he will remain with Borussia Dortmund. Mkhitaryan has been linked with a move to Juventus Turin and London’s Arsenal, but Tuchel told the media in Germany that he “wants to keep Mkhitaryan no matter what the cost.”

Mkhitaryan’s agent, Mino Raiola, has told Gazzetta dello Sport that Mkhitaryan would like to wear Juventus’ colours in the future. Yet it is believed that Raiola’s comments are a negotiation tool used in order to get the best possible deal with Borussia Dortmund—Raiola wants a €10 million a year deal, whereas Borussia has offered €7 million.

“Everything is arranged”, Tuchel explained, “it is now up to Miki to convert the ball into a goal, or at least to pass it in a way for us to bring the ball easily across the line. In this case he has to score himself. But I am convinced that he will.” Tuchel’s words, therefore, suggest that a Mkhitaryan contract extension is imminent. 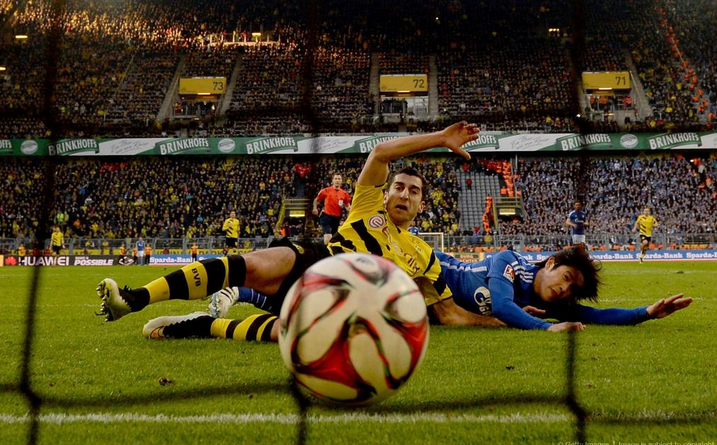 Borussia will be disappointed by the 2-2 tie against Schalke a result that effectively ends dreams of a German championship for Dortmund. This makes Borussia’s Europa League return match at Anfied even more important, however, as a Europa League title would be a great compensation for missing out on the German championship. Dortmund only managed a 1-1 tie against Liverpool at home, which means Dortmund must either win or a tie higher than 2-2.

Mkhitaryan will be the key for the Liverpool vs Borussia Dortmund match, as the Armenian has become the vital element in Thomas Tuchel’s match plan.