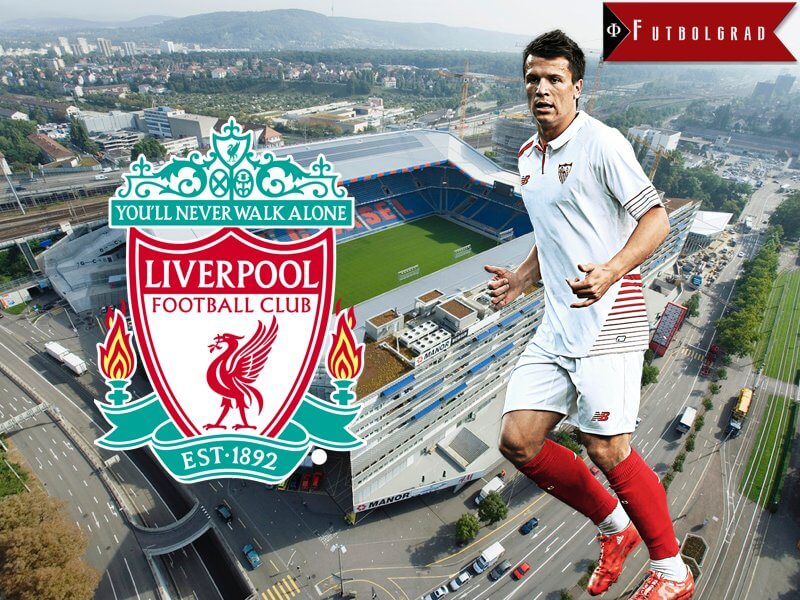 There are several story lines emerging before the UEFA Europa League final Liverpool vs Sevilla, which will take place on Wednesday in Basel’s St. Jakob-Park. For Sevilla’s Yevhen Konoplyanka the final could become a time of redemption.

Konoplyanka reached the final last year with his former club Dnipro Dnipropetrovsk. Last year’s final between Sevilla and Dnipro ended with broken dreams for Konoplyanka and his teammates, as Sevilla narrowly beat the Ukrainian’s 3-2 at the final in Warsaw.

After the final whistle the camera focused on Konoplyanka, who had sunken down at the centre of the pitch crying.

Konoplyanka was then at the centre of a lengthy transfer drama, as he was linked with a move to several clubs across Europe. Yet despite being technically a free agent it was difficult for Western European clubs to sign the Ukrainian midfielder, as Konoplyanka had a contract with Dnipro’s owner Ihor Kolomoyskyi, which meant that the lucky club would have to pay a fee to Dnipro’s owner—but not the club.

In the end it was Sevilla that managed to land Konoplyanka from Dnipro. But it has been rumoured that Sevilla was only able to complete the transfer with the help of an international consortium, and that Dnipro—or more likely owner Ihor Kolomoyskyi—will be earning a certain percentage on top of any future transfer.

Yet Sevilla has long been known as a club that has to cope with a major turnover in its squad every season. Hence, Konoplyanka’s signing was understood to be both a strengthening of the squad, but also as a future investment.

The expectations for Konoplyanka are high, as many expect him to eventually move on. Until then Sevilla hopes that the Ukrainian can help the club to break into Spain’s top form.

Yet Sevilla’s relationship with Third-Pary investors, such as Doyen Sports, meant that the club was forced to sell several high profile players during last summer’s transfer window. At the same time, however, the signings of several high profile players such as Yevhen Konoplyanka gave hope that the club could finally qualify for the Champions League by reaching the top four in La Liga.

As Marca writes, however, Sevilla’s La Liga season has largely been a disappointment, as the club finished only seventh in the league twelve points behind fourth placed FC Villarreal. At the same time Marca praised Konoplyanka’s signing as another smart transfer by Sevilla’s sporting director Monchi.

At the same time it can’t be ignored that Konoplyanka has not been in his best form this season, as he needed time to adjust to the higher playing standard of La Liga. The winger also often struggled with smaller injuries, which is probably another sign that Konoplyanka is struggling physically with the higher demands of Spanish football, as opposed to the Ukrainian Premier League.

There have already been doubts over whether Konoplyanka will be fit enough for the Europa League final against Liverpool on Wednesday. Konoplyanka failed to complete practice on Thursday, and along with several other first team players, was rested in Sevilla’s final La Liga match on Saturday—a 3-1 defeat to Athletic Bilbao.

Liverpool have meanwhile failed to qualify for European football via the English Premier League, as Jürgen Klopp’s team finished eighth in the table—two places below a Europa League spot. A victory on Wednesday would see Liverpool qualify for the UEFA Champions League, which would salvage a disappointing season for the club.

Meanwhile reports from Spain say that Konoplyanka will be fit for the final on Wednesday. On a personal level he would like to find redemption for losing the final with Dnipro last season. But there is also the fact that a third Europa League victory in the row would mean a UEFA Champions League group stage spot for Konoplyanka’s club.