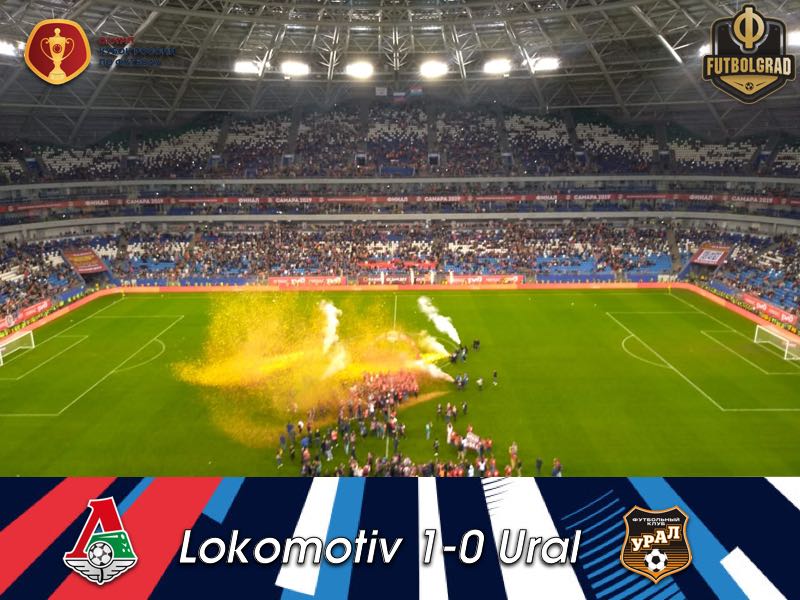 SAMARA, Russia – Lokomotiv Moscow v Ural comes up with the expected result as the Railwaymen walk away with yet another Russian Cup.

Dmitri Barinov’s glanced first-half header proved the difference as Lokomotiv won their second Russian Cup in three seasons. In a repeat of the fiery 2017 final in Sochi that saw four red cards dished out for a full-on fist fight, Ural struggled to replace the creativity offered by the suspended Erik Bicalvi despite a bright opening spell.

Ural controlled the early passages of play despite missing their most cultured ball-player in Bicfalvi. Despite an unorthodox selection, the formation remained in a usual 4-2-3-1 with Pogrebnyak dropping behind Panyukov and Ilyin moving to the right. What it did, however, was allow a huge amount of flexibility. In possession, Ilyin and Pogrebnyak would move alongside Panyukov while El Kabir remained disciplined in following Brian Idowu. The intention became clear; crosses would be key. Kulakov alone delivered three in the opening 12 minutes.

As imaginative as the setup was, it has its drawbacks. After 19 minutes Lysov burst forward into space left by Ilyin, and whereas moments earlier he had turned back and slid it to Fernandes, this time he drilled a dangerous ball teasingly behind the defence. Former Ural man Smolov slid in to convert, but he had strayed inches offside.

The only goal of the game came before the half-hour mark as Smolov carried the ball on the left. He slid it through for Fernandes whose run was tracked by Boumal. His clearance went out for a corner. Fernandes whipped it in for Barinov to glance past Godzyur from a few yards out.

The dam had been broken. After 31 minutes, El Kabir collected a Brian Idowu clearance, feinted inside a challenge but just lost control of the ball. The clearance found Smolov, who laid it wide to Zhemaletdinov. Suddenly there was a three on two as Alexey Miranchuk broke between Emelyanov and Strandberg, Smolov had recycled his position and was waiting, as Miranchuk helped it on, but with only Godzyur to beat his shot sprayed wide of the keeper’s outstretched foot.

Ural threatened briefly to pull level, unsurprisingly from a set piece. Barinov put in a meaty challenge on Pogrebnyak, who had suffered a foul 20 mins earlier. Othman El Kabir’s free kick was headed back across goal by Ilyin to Andrey Panyukov, whose header was deflected behind by Lysov. El Kabir’s delivery from the right found Emelyanov, who headed in towards Ilyin. Idowu somehow got a subtle touch to take it over the bar.

After the break El Kabir robbed Manuel Fernandes of the ball to leave himself with acres of space. He shot directly at Guilherme though when he probably should have squared it. Three corners in a row, all good deliveries. Increasingly, balls into the box appeared to be the only method of attack from Ural. El Kabir’s inswinging crosses were mostly accurate but relatively simple to read for Lokomotiv’s makeshift defence. Pogrebnyak’s challenge on Zhemaletdinov just before the hour mark was similarly blunt in its delivery, and he was shown a yellow card for it.

Merkulov overlapped and crossed right from the byline to Aratore lurking beyond the back post. The young full-back justified his recent callup to the provisional Russia squad with his confident running offering Ural’s only real threat that didn’t involve crossing. Aratore’s volley blazed back past the left post.

Anton Miranchuk hobbled off after the hour mark, and in his place came Dmitri Tarasov. Five minutes later the defensive midfielder threaded a sumptuous ball between Merkulov and Emelyanov for Zhemaletdinov to race onto. He took a touch, then with a good sight of goal drilled it towards the back post. Godzyur’s feint touch kept it out, but by the finest of margins.

Yuriy Semin collected his sixth Russian Cup and left Lokomotiv as the competition’s most successful side with eight trophies. Ural once again saw a tantalising dream of European football slip through their fingers at the last hurdle against the Railroaders. Ultimately, though, they can have no complaints on the night as they were simply outclassed.

Alexey Miranchuk was absolutely majestic in midfield alongside his brother Anton. It took a short while for Lokomotiv to settle after an initial burst of adrenaline from Ural, but before long spaces opened up behind their opponents’ unorthodox wide players which he glided through effortlessly. As the second half wore on he had less need to dictate the pace as his midfield was screened by the double pivot of Barinov and Tarasov. By the later stages, however, his supreme technique and awareness of teammates had made the telling difference.

Ural’s absentees were telling as they were forced to shift their personnel significantly. The standout missing element was ket creator Erik Bicfalvi, whose goal in the semi-final second leg proved critical. In that same match though he was sent off after VAR’s intervention for a stamp; although the club’s appeal did force an acceptance from the committee that the incident was not malicious, the suspension was upheld. Dmitri Parfenov deserves credit for an imaginative solution by moving Vladimir Ilyin, Pogrebnyak and Emelyanov into unusual positions to provide flexibility, but in the end, Lokomotiv’s class told.