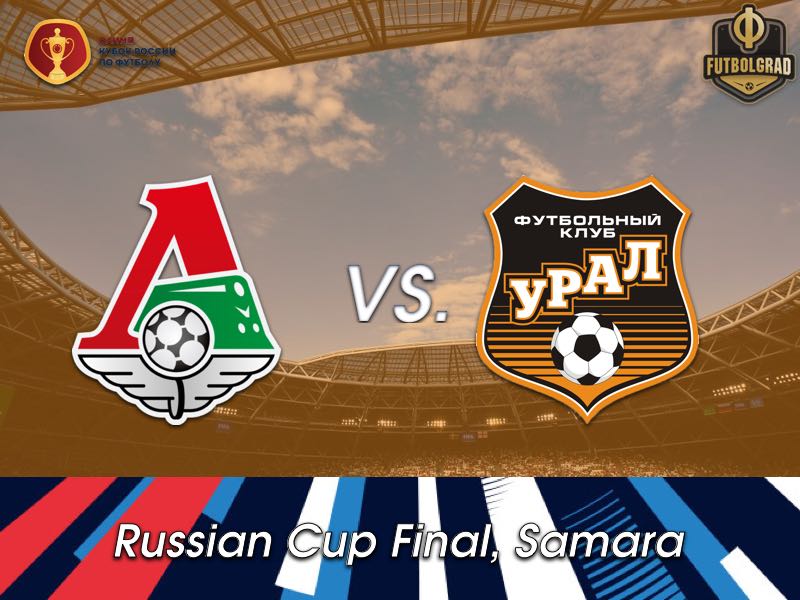 As the sun dipped below the sweeping arches of the Fisht Olympic Stadium two years ago turning the sky a wild blood red, the mood on the pitch below turned an altogether more violent shade. Despite holding out valiantly for 75 minutes, Ural Ekaterinburg were cut down to size by goals from Igor Denisov and Aleksey Miranchuk. With frustration getting the better of Artem Fidler, choice words were exchanged between him and Jefferson Farfan before a swinging punch from Ari, and a flying kick from Edgar Manucharyan saw all four leave the pitch in disgrace deep into added time.

The subplots to this year’s final go far beyond a simple rematch. While Lokomotiv celebrated, Ural survived relegation before scrapping to avoid the drop a year later; in fact, it was entirely down to current Lokomotiv Moscow forward Fedor Smolov that Ural were a top-flight club at all after his spectacular loan spell saved the club by the skin of their teeth two years earlier. Lokomotiv, on the other hand, have indulged in league titles and cup wins for most of the last three decades. The aggression on the pitch in Sochi will have been laced with more than a slither of jealousy from Ural’s perspective.

Ural President Grigoriy Ivanov has openly stated since the club’s first ever final that he intends for them to compete in Europe. In 2015-16 they came close through the league, but the recent intent shown in the Russian Cup demonstrates the more direct route. Winning the cut glass trophy provides Russia’s only direct entrant to the group stages, and with guaranteed exposure and ability to attract better players and larger crowds.

Lokomotiv have no such issues with qualifying for European competition. Although they have competed regularly in the Europa League, they returned to the Champions League this season after securing their first league title in 14 years. With arguably the weakest group – Schalke, Porto and Galatasaray – hopes were high of edging towards the knockout stages, but a dismally defensive set of performances left them embarrassed. Yuriy Semin’s history with the club guarantees him legendary status, so although his reputation took a blow, he remained in charge.

After Zenit St. Petersburg’s impressive financial clout and recruitment, it is highly unlikely any team will realistically challenge them for the title next season, with the possible exception of Krasnodar and CSKA Moscow, so it would be very hard to demand another title push of Semin. Instead, securing regular Champions League football will be the realistic measure of progress. That aim has been secured already though with Lokomotiv holding a four-point advantage over Spartak.

The tangible taste of trophies is irresistible, though. Continental success is a challenge for the next level in their development, which for now leaves the Russian Cup as the main target. Lokomotiv are rarely explosive, at least not in the early stages of games; since the start of last season, they have been drawing at half time 40 times, more than any other Russian top-flight side. The almost mechanical precision with which they grind out results makes them a tough opponent to break down. At the grand old age of 72, Semin’s obdurate attitude has grated with the Lokomotiv hierarchy at times, but it gets results.

The makeup of Lokomotiv’s side is imbalanced in a way. While there are some of the most gifted youngsters in the country in Alexey and Anton Miranchuk, Rifat Zhemaletdinov, Dmitiri Barinov and Khvicha Kvaratskhelia, most of the cornerstone figures are over 30. Farfan is injured, while the divisive Igor Denisov has been out of favour for some time. Vedran Corluka is 33 and has recovered from a cruciate ligament injury in the last few months, while the electric spark that once lit up Manuel Fernandes is rapidly fading into nothing.

On paper, the Miranchuk twins should have enough spark on their own to dominate proceedings, but the absence of Denisov, Tarasov and most likely Fernandes will put a lot of pressure on Krychowiak in the middle. There is a worrying lack of pace in defence that could be exploited by Panyukov’s darting runs or El Kabir’s trickery. Former Ural man Smolov will start up front.

Many of the side that were simply outclassed two years ago are still on the books. Fidler himself is coming to the end of his shelf life, while Mikhail Merkulov – a recent call-up to the provisional Russia squad – has swapped the first-choice status with Aleksandr Dantsev. The most notable absences from the lineup will be Erik Bicfalvi and Nikolay Dimitrov due to suspension and injury respectively. Bicfalvi was sent off by Sergey Karasev, Russia’s official at the World Cup, after consultation with VAR in the semi-final second leg for an alleged stamp, and the subsequent appeal was turned down on Monday.

Both are critical to Ural’s style of play. Unlike most sides in modern football, Ural play with two out-and-out wingers in Othman El Kabir and Dimitrov, with Bicfalvi the glue that holds counter-attacks together. Andrey Egorychev has been a revelation this season and will surely step into the attacking role, but Marco Aratore has been woeful in lieu of Dimitrov. The main question remains over who Dmitri Parfenov will select up front. Pavel Pogrebnyak has been a willing if limited worker, but Andrey Panyukov has offered the most impact as shown by his six goals.

Lokomotiv have an abundance of attacking talent thriving and fit to go in the shape of top goalscorer Anton Miranchuk, his brother Alexey, Smolov, Rifat Zhemaletdinov and Eder, but one area they are running slightly low on is in defensive midfield. Dmitri Barinov and Dmitri Tarasov are unavailable through injury, leaving the former PSG holding player to keep a steady ship. His wealth of European experience will come in extremely useful in a tight knockout atmosphere, especially if tensions run high like two years ago, with his tidy passing vital to allowing the forwards to thrive.

His form this season has been indifferent but in the absence of regular appearances from Igor Denisov or Dmitri Tarasov, he has provided a platform. Only Charles Kabore has made more interceptions from the league’s central midfielders. While there is not likely to a consistent wave of attacking energy from Ural given the key players they have missing, it will only take a slight lapse of concentration from Lokomotiv to lose the initiative. Krychowiak will be critical in ensuring this does not happen. 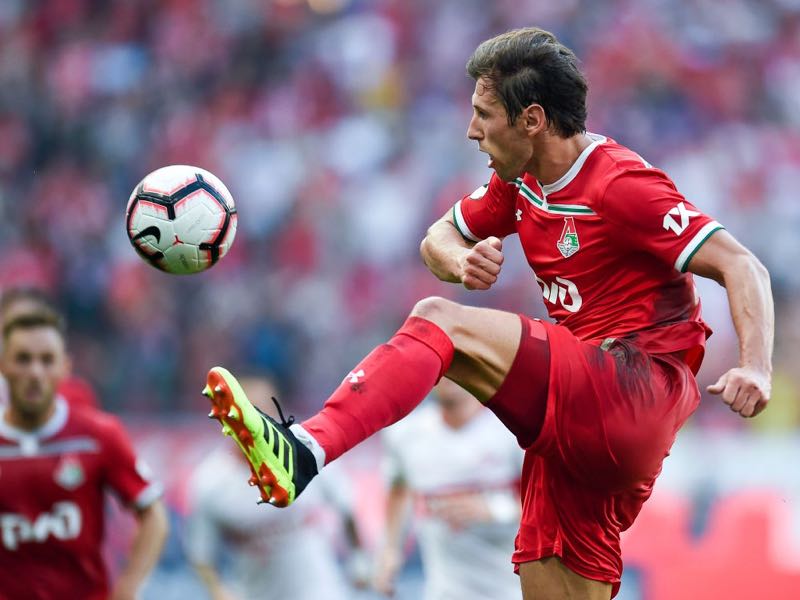 In the absence of the talismanic Erik Bicfalvi and the more direct running of Nikolay Dimitrov, almost all the creative onus lies on the mercurial Dutchman. While Bicfalvi orchestrates play through the centre at a serene pace, El Kabir offers a genuinely unique prospect out wide on the left flank. He took a while to settle consistently into life in Russian football, but since the winter break in particular he has been in sensational form.

His task to open up Lokomotiv’s defence will be made harder by the extra attention he is likely to receive, but it is in close quarters where he truly excels. Petrus Boumal will play a vital role screening the defence from the Miranchuk twins and former Ural forward Fedor Smolov, but the one key area they can threaten a breakthrough is almost certainly going to come through El Kabir. 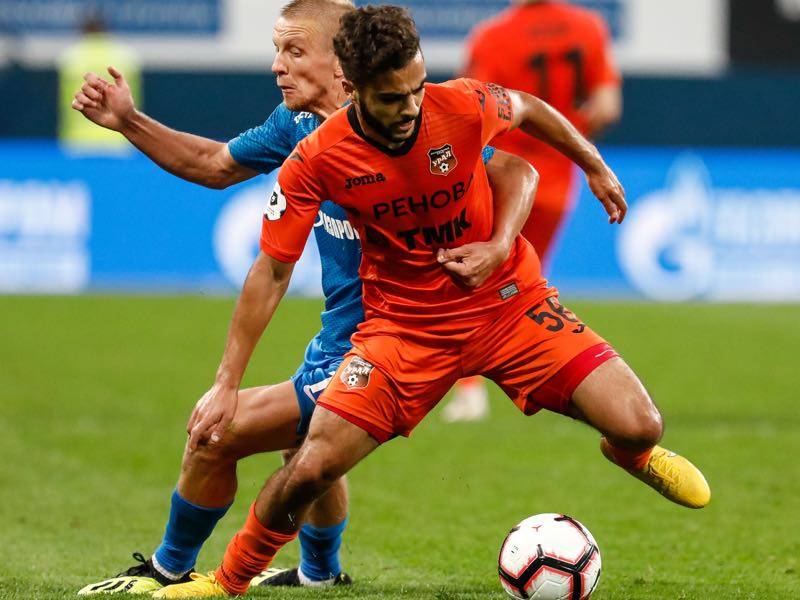