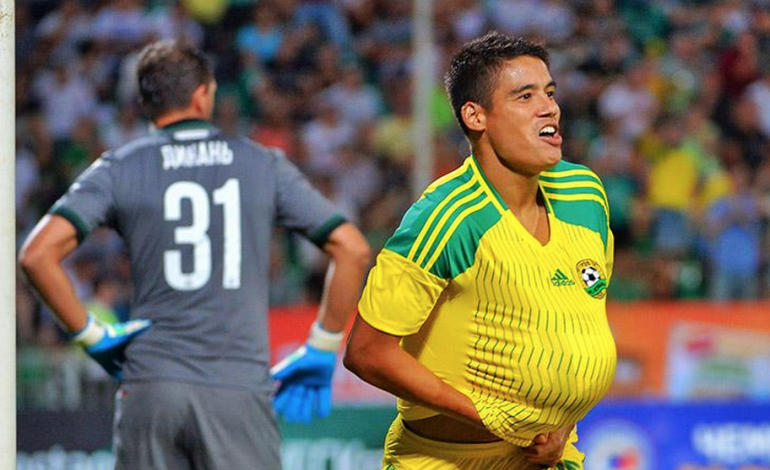 Spartak Moscow are poised to further strengthen their squad in order to secure the club’s first European appearance in two years. Spartak, which are currently fifth in the Russian Football Premier League, are reported to be interested in the current top scorer of the league, Kuban Krasnodar’s 25 year old Paraguayan left-winger Lorenzo Melgarejo.

Lorenzo Melgarejo, who joined Kuban from Benfica Lisbon in September 2013 on a €5 million deal, has scored eight goals in 12 appearances so far this season. At Spartak, Melgarejo would join an already potent front line, which features the Dutch goal scoring sensation Quincy Promes—Promes recently was the hero at Russia’s oldest derby between Spartak and Dinamo Moscow when he scored the last minute winner for Spartak.

Melgarejo’s current transfer value according to Transfermarkt.de is €5 million, but Kuban’s recent acquisition of Andrey Arshavin, and Kuban’s continued financial problems, could mean that the club may be more than willing to capitalize on the Paraguayan striker in the winter transfer window.

This would be Spartak’s second high profile signing this winter, as the club has already finalized the transfer of the Russian winger Aleksey Ionov, who will join Spartak from city rivals Dinamo Moscow.

Melgarejo, who is equally adept both as a left winger and as a front line striker, could therefore complement a front line at Spartak that would see him play on the left, Promes in the centre, and Ionov as the right winger. Furthermore, Spartak would have options from the bench as the Cape Verdean Zé Luís has recently returned from injury.

Yet, there are obstacles to the transfer, as the Russian Football Union is currently contemplating a change from the current foreign limitation rule—commonly called 6+5—that forces clubs to field at least five players who are eligible to play for the Russian national team. The new rule would limit the number of legionnaires—as they are commonly called in Russia—to six players per squad.

Spartak currently has nine legionnaires on their books, and adding Melgarejo to the squad would raise this number to 10. This figure would force Spartak to sell four legionnaires in the summer break, or as Futbolgrad’s Saul Pope suggested, may prompt the club to test loopholes in the rule changes by sending several legionnaires down to their farm team Spartak-2, which are currently playing in Russia’s second division in the Russian Football National League.

Also, there have been rumblings that Quincy Promes may leave the club as early as this winter, as Spartak reportedly has received offers from several English Premier League clubs for the Dutch goal scoring sensation. Still, Spartak’s owner, Leonid Fedun, wants at least €30 million for Promes—a price which no English club has been willing to pay (read more on this story in my upcoming article for the Soccer Manager Blog).

The new limitations rule, however, may cause a severe crash in the value of legionnaires employed in the RFPL, as foreign clubs will be aware of the fact that Russian clubs have to reduce foreigners in their squads in order to meet the registration criteria. In that sense, Spartak’s interest in Melgarejo could be viewed as an attempt to bring in a possible replacement for Promes in case Spartak is forced to pull the trigger this winter, and sell Promes before his value deflates.