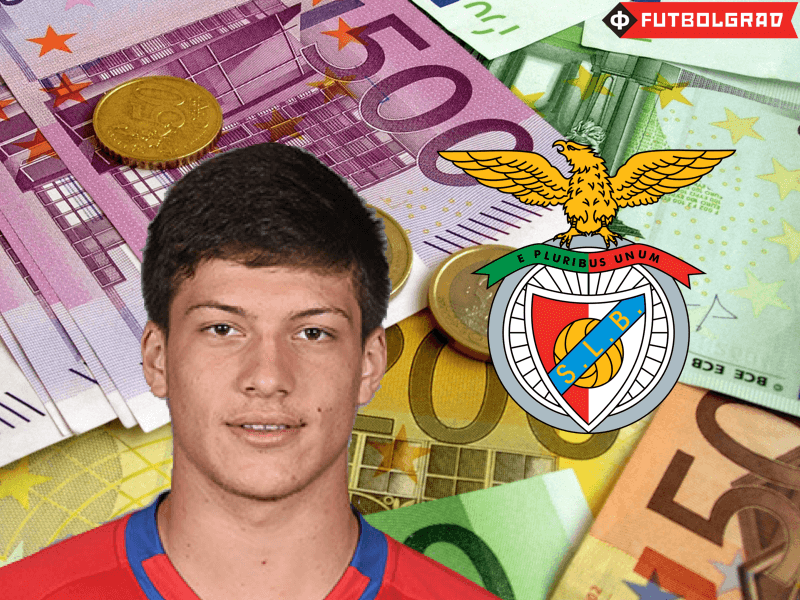 Serbian SuperLiga leader Red Star Belgrade have sold their bright young striker Luka Jović to Benfica Lisbon. Jović had his medical on Saturday and according to the Portuguese newspaper A Bola is expected to sign a contract until 2021.

Benfica will pay €2.2 million to both Red Star Belgrade and the Cypriote club Apollon Limassol, which held the majority of the economic rights for Jović. The Israeli businessman Pini Zahavi transferred the transfer rights for Jović to Apollon to circumnavigate third-party ownership (TPO) rules. Zahavi in turn controls Apollon—his financial investments have kept the club afloat—and have therefore acted as Zahavi’s Cypriote offshore account. By selling the economic rights to Apollon, which in turn loaned Jović back to Red Star, Zahavi was able to circumnavigate FIFA’s anti-TPO rules.

Officially, Zahavi’s business partner Fali Ramadani whose player agency LIAN Sport Agency represents Jović—the company is specialised in Serbian players, and has in the past bee criticized for TPO deals.

Serbian club football has struggled in recent decades as teams receive very little television, sponsorship, or prize money. Hence, players have become the only source of stable income for clubs. Businessmen like Zahavi and Ramadani therefore provide Serbian clubs with much needed short-term cash by buying percentages of players.

We have seen a similar model with another prominent Serbian player, as Partizan Belgrade sold 50% of Andrija Živković’s contract to an investment fund owned by none other than Zahavi. There is another parallel as both Živković and Jović where reportedly Borussia Dortmund transfer targets in the winter break. In the case of Živković it is rumoured that Borussia have signed a pre-contract deal with the player, which would see him move as a free agent to Germany in the summer. A transfer in the winter has so far failed as Zahavi preferred to move Živković to Portugal.

Portugal is a preferred target country for players represented by Zahavi and Ramadani, as Portuguese clubs are often willing to accept TPO clauses in player contracts (for more information on TPO contracts in Portuguese football check out the Football Leaks homepage).

Hence, in the case of Živković, Zahavi might end up loosing his investment, yet this seems to be a reasonable risk given the influence that the player agent maintains over other talents, such as the highly touted Luka Jović.

At Benfica Lisbon the 18-year-old Jović, who has scored five goals in 19 SuperLiga matches so far this season, will be able to mature into a high profile player with all the tools that will make him a high profile transfer target for a big club in England, Germany, or Spain in just a few years. Given the fact that Jović will also receive regular exposure to Champions League and Europa League football Jović is likely on course to increase his current transfer value and will most certainly command a higher price than the above mentioned €2.2 million that Benfica spent this winter.

In order to provide some perspective it is worth noting that the last Serbian player to come out of Benfica Lisbon was Lazar Marković. Marković was bought in the summer of 2013 for €10 million, and just one season later was sold for a staggering €25 million to Liverpool FC. Like Jović, Marković is represented by the LIAN Sports Agency, and it is almost certain that in both cases Marković’s transfer provided a handsome profit to Zahavi and Ramadani. Hence, while the agency appears to have lost out on Živković, Jović is certain to provide the massive profit margin that will offset the costs.