Mário Fernandes is one of the few bright spots in what, thus far, has been a disappointing season for CSKA Moscow. As a result, the Brazilian right-back, who recently became a Russian citizen, is the only CSKA player listed in the whoscored.com Russian Premier League Best XI.

With CSKA Moscow very much out of the title race, and unlikely to be able to earn a Champions League spot by finishing second, it is no surprise that the Brazilian, who will likely be capped by Russia in April, has been linked with a move away from Russia.

The fact that Mário Fernandes will not be eligible to play for the Russian Sbornaya until April 2017 is due to FIFA rules that require a player to have played in their new country for five years before they are deemed naturalized. This also means that a winter transfer is extremely unlikely.

At the same time, given the fact that CSKA Moscow will likely not play in the Champions League next season, and the fact that right-backs are always in huge demand, Mário Fernandes could become a transfer target during the summer transfer window. There has been already talk that FC Barcelona are interested in signing the player from CSKA Moscow. 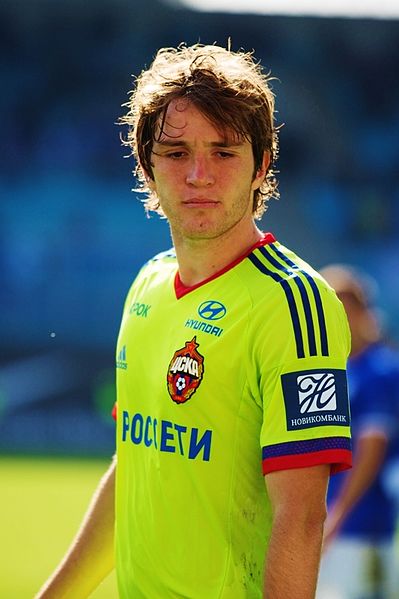 Mário Fernandes has been a major part of CSKA Moscow since 2012 – Image by Ekaterina Laut CC-BY-SA-3.0

At the time, he was often compared to then Bayern München centre-back Lúcio, and he had numerous offers from clubs like Real Madrid, Bayern München, Internazionale, Porto, and Barcelona. But those were different times and, as I pointed out in the recent World Football Index Futbolgrad Podcast, the Russian Football Premier League then played a similar role to that of the Chinese Super League today.

Mário Fernandes was deemed the next Lúcio

Fuelled by what appeared to be endless oil exports, Russian clubs could easily bid with the best teams in Western Europe and, thanks to lower tax rates, were even able to outmanoeuvre big hitters from Germany, Spain, and England. Thanks to the conflict with Ukraine and the resulting sanctions from the West, those times seem to be over, and the RFPL has very much developed into a sellers, rather than a buyers league.

Mário Fernandes is currently valued €15 million by transfermarkt.de but, given his position, and the fact that he is eligible to play for the Russian national team starting in April, which means that he will no longer occupy a foreigner spot when fielded in the Russian Football Premier League, Mário Fernandes will most likely be commanding a transfer offer of around €25 million from any club who want to sign him.

Given the difficulty that big clubs have in filling both wing back positions it is expected that CSKA Moscow will receive an offer in that ballpark from a club like Barcelona this winter. Barça, in fact, seem desperate to fill the position, as they are not convinced that Sergi Roberts alone would be enough to fulfill Barça’s goals long term.

There has even been talk that Barcelona could sign Shakhtar Donetsk’s Darijo Srna on a short term deal to fill the void—perhaps the Croatian will be signed to fill in for the interim until Mário Fernandes becomes available in the summer. But Barça may also wait till the summer because Mário Fernandes is eight years younger, and the fact that his cultural background would make it much easier to integrate him in the squad the CSKA Moscow right-back could be a much better option for the Blaugrana.

Mário Fernandes will be a hot commodity in the summer

But even if a move to Barcelona does not materialize there will be no shortage of suitors for the newly naturalized Russian. As mentioned above the major reason for that is the fact that players who can play right-back at the highest level are in demand. It is, however, also the way Mário Fernandes plays.

In fact I recently compared the wing-back to Germany’s Philipp Lahm. Like Lahm, Mário Fernandes’ game has no weakness. Like with Lahm, Mário Fernandes will never become a prolific goal scorer, but at the same time his anticipation, ability to play key passes, tackling, along with his ability to play a game without making mistakes—he has not received a single yellow card all season—means that he provides something that is rare in the game today—reliability.

Perhaps the thing that sets him apart from players of Philipp Lahm’s ability is the fact that you rarely see Mário Fernandes dictate a game like the German superstar has. Lahm, like no other player on his position, has the ability to stamp his will on a game, which is a trait that has sometimes been lacking in Mário Fernandes’ game.

Yet there is also an upside as, unlike the tiny German, Mário Fernandes stands 189cm tall, which makes him excellent in aerial duels, and also means that he could play centre-back in a back three.

Mário Fernandes could play in a back three

The back three is becoming an ever more popular option, and Serie A, Bundesliga, and La Liga teams in particular have experimented with a 3-5-2 formation. Mário Fernandes would certainly be able to play in that formation either as the right centre back, or on the right side of a formation that turns from a 3-5-2 to a 5-3-2 when defending.

Time will tell what is next for Mário Fernandes, but given the fact that he will finally be eligible to play for Russia in April, and that he would likely want to continue to play in the Champions League, a move would not be without question. Clubs from abroad, like Barcelona, and numerous clubs from the English Premier League and the Bundesliga will likely track his development.

But do not be surprised if he stays in Russia after all, as both Zenit Saint Petersburg, and CSKA’s city rival Spartak Moscow will likely be intrigued about the possibility to sign a right-back of his calibre, who would not take away a foreign spot in the starting eleven.