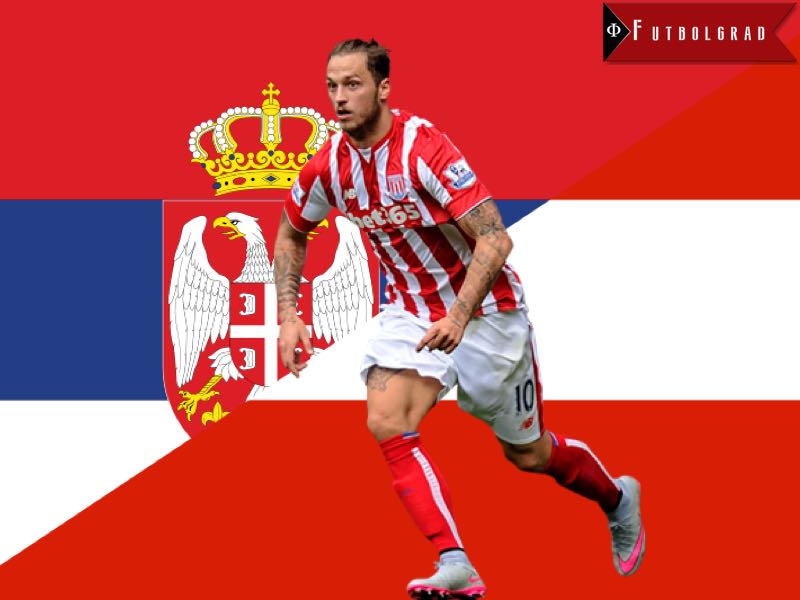 One of Austria’s biggest stars Marko Arnautović did not know what to expect as he headed out of the players’ tunnel at Stadion Rajko Mitić in Belgrade.

Formerly known as Marakana, Crvena Zvezda stadium was filled with only a handful of enthusiastic fans who joined us journalists on the stadium an hour before the game.

And as FIFA officials stepped on the field to perform the last on-pitch check before the kick-off, an unsuspecting individual followed, taking one step after another, carefully glancing at the hauntingly empty stands.

It was Stoke City’s key man, Austria’s Serbian son. A vanished one who ended up not being the only person surprised on that occasion in Belgrade on the freezing cold night of October 9. Despite his reputation as a renegade wild spirit, I had the honour to see for myself on that night that Marko Arnautović is actually an openhearted person. 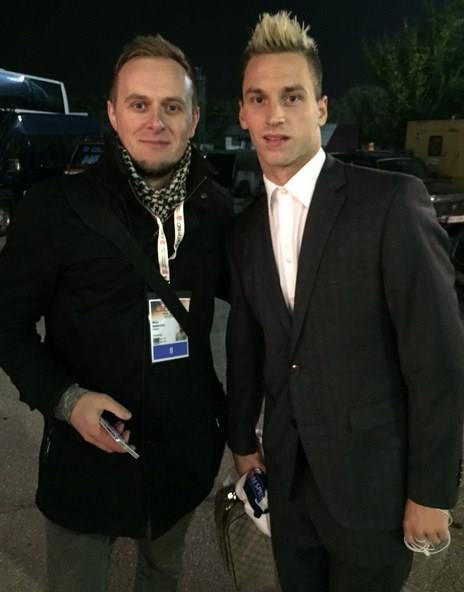 Miloš Marković with Marko Arnautović during the post-match interview

Marko Arnautović’s father is Serbian and his mother Austrian and, despite the fact that he remains a prized asset of Das Team, the 27-year-old Floridsdorf-born forward has never been shy about his close connection to his Serbian roots.

Before kick-off, Arnautović could be seen listening to the Serbian anthem with three fingers joined together, and placed on his heart as a way to honour his Serbian friends and family who were watching from the stands. “I am an Orthodox Christian, my father is Serbian, and I like hearing the Serbian anthem”, Arnautović told Futbolgrad after the game with Serbia on Sunday night in Belgrade.

Marko Arnautović remains the Serbian missed chance, however; Slavoljub Muslin’s team could use a player of his calibre, of his agility and versatility, which was once again on display against the Serbian Eagles.

The 27-year-old forward came close to scoring on a couple of occasions, even hitting the post with his header, and definitely was one of the most prominent players for the Austrian team. Had the Serbian FA played it right when they had the chance, things could have been very different. Arnautović could very well have been Serbia’s strike force that could have made the crucial difference for the Serbian team through these last couple of disappointing years.

Arnautović was never on Serbia’s radar, however, as he moved up the youth ranks of FC Austria Wien, SK Rapid Wien and Jong FC Twente Enschede in the Netherlands.

The Serbian FA (FSS) had had plenty of time to notice his emerging talent as Arnautović made his moves in Dutch football with Twente, but the ultimate chance to grab the up-and-coming forward was lost in 2008 when Arnautović was given a full senior debut for the ÖFB.

His desire to switch allegiance was never in question

“I want to play for Serbia,” announced then 21-year-old Werder Bremen forward after signing a deal with the Bundesliga side following a season-long loan spell from Inter Milan in 2010.

The fact he had already represented Austria on five occasions up to that point, however, proved to be a big stumbling block due to the strict FIFA rules when the two sides attempted to make a deal. Serbia lost out with Arnautović, as they did with Bojan Krkić, who was cap-tied to Spain.

Arnautović spoke in the introduction to last night’s game both for Serbian and Austrian media and one could see that the Austrian Serb was fairly nervous about his trip to Belgrade.

“I did not know what to expect”, he added last night as he spoke about the unbelievable welcome he was given at Crvena Zvezda stadium.

As the stadium slowly began to become crowded, the atmosphere started to heat up. Over 15,000 people eagerly anticipating their team’s first appearance in their new shirts were loud in their disapproval when the Austrian team came out to warm up.

Having already checked the field out half an hour before, Arnautović was the exception to the rule and was applauded on his way out much to his own bewilderment.

“I expected boos and whistles—they surprised me,” Aurnautović confessed after the game.

The match itself proved to be an eventful affair with Serbia putting on a good show in attack and terrible one in defence, which allowed Marko Arnautovic and his teammates plenty of room to develop attacks.

Having already promised that he would not celebrate a goal against Serbia, Marko Arnautović seemed to have gained the affection of even the most demanding Serbian fans, who have booed Aleksandar Dragović, another Austrian player with Serbian origins.

Still, Marko is something else. His charisma is infectious and neither the Serbian fans nor the players themselves held grudges toward him as, on more than a few occasions, he tormented Muslin’s wasteful defence line. Southampton’s Dušan Tadić who, with two assists and goal to his name was the man of the match, gave Arnautović a warm hug and called him “Brate moj” (My brother) as the two Premier League stars parted ways in the press area.

An interesting detail occurred during the match—a detail that reveals Arnautović’s close bond with other Serbian players, in this case Vladimir Stojković, Serbia’s first choice between the sticks.

As Marko Arnautović dropped to the ground in the penalty box after missing a close chance to score a goal for his team, the Nottingham Forest keeper ran towards him and whispered something in Arnautović’s ear, much to the amazement of the entire stadium.

“He told me to slow it down a bit,” Arnautović revealed, which brought laughter to the press room.

A highly emotional game for Marko Arnautović was rounded off in the best way possible. All 15,000 fans gave Serbia’s lost son a heartfelt send-off from the pitch when, after the final whistle, they shouted “Marko, Srbine” (Marko, you are Serbian).

It was more than what Stoke star had bargained for and he waved back warmly in heartfelt gratitude on the night that he will surely cherish forever.