‘When life was a mystery not knowing whether you’d wake up to your family or not’ is a poignant caption inserted underneath an Instagram photo featuring a group of children. The photo was taken in the town of Arandelovac in central Serbia, some 75 kilometres away from Belgrade at a time when the capital was one of the many cities across the country being subjugated to the NATO bombing campaign of 1999. One of the children in the photo is five-year-old Miloš Degenek, whose 101 Dalmatians t-shirt catches the eye. 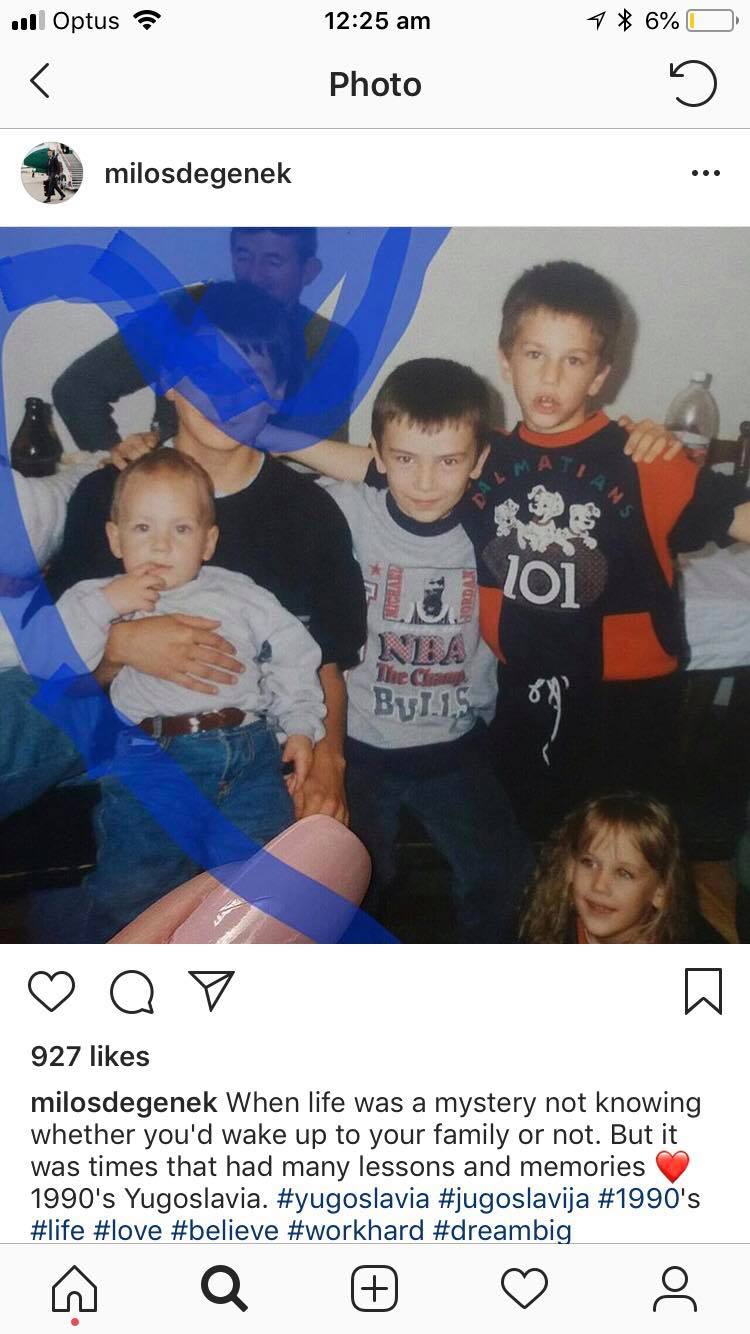 War had characterised his life up until that point. Born in the Croatian city of Knin, he was only 18 months old when he along with his family, and thousands of other Serbian civilians, journeyed towards Serbia as refugees forced to abandon their homes during Operation Storm. Life in Serbia did not get much better, with the events of 1999, poverty and the lack of employment opportunities making life hard for his parents who decided to move their young family to Australia the following year.

Miloš Degenek – From Yugoslavia to Australia

Their destination was Sydney, the centre of the sporting universe in 2000 as it hosted the Summer Olympics. The Degenek family eventually settled in the south-western suburbs of the city and lived alongside several other families who had also escaped the horrors of the war that had plagued the region of the former Yugoslavia in the 1990s. The round ball would ultimately become a tool of assimilation for Miloš who had by this stage replaced his 101 Dalmatians attire with the jersey of his favourite football team – Crvena Zvezda.

A junior at Bonnyrigg White Eagles – a club established by Sydney’s Serbian community – Degenek attended Westfield Sports High School, which counts former Liverpool midfielder Harry Kewell as its notable alumni. In 2009, he was selected to represent the Australian U-15 national side and eventually captained the side less than a decade after arriving as a child of war in an alien land on the other side of the world. Two years later, he represented Australia at the 2011 U-17 World Cup in Mexico as the Joeys reached the Round of 16 stage.

The following year saw the defender make a return to Europe as he agreed to join Stuttgart while also switching national allegiances by representing Serbia’s U19 side. Injury struggles limited him to just nine appearances for Stuttgart II in Germany’s third tier over the next two seasons. In 2015, he joined 1860 München in Bundesliga 2 while also returning to representative action for Australia at U-23 level. Featuring in defensive midfield for Die Löwen, Degenek earned his most sustained period of playing time at senior level by making 25 league appearances across the campaign.

His progression at club level was rewarded with a maiden senior national team call-up in May 2016 as he made his debut off the bench at right-back against England in the Stadium of Light. Degenek’s 75th-minute cross was inadvertently headed into his own net by Eric Dier as the Socceroos fell to a 2-1 defeat. An injury-riddled start to the 2016-17 club season saw the Australian lose his starting place under managers Kosta Runjaić and Daniel Bierofka respectively. A January move to Yokohama F. Marinos of Japan saw him depart the Allianz Arena a few months before 1860’s disastrous relegation.

A regular for both club and country throughout 2017, Degenek appeared in the 2017 Confederations Cup while also playing his part as the Socceroos achieved qualification for the 2018 FIFA World Cup in Russia after a prolonged cross-continental play-off process. Reunited with his former national team manager Ange Postecoglou in Yokohama this year, he was a non-playing member Australia’s World Cup squad under his successor Bert van Marwijk. Degenek’s presence in Russia alerted the football department of Crvena Zvezda who were keen to find a replacement to recently-departed championship-winning French centre-back Damien Le Tallec.

Degenek – Living the dream in Belgrade

Once personal terms had been agreed, Degenek joined his childhood club in Belgrade, fulfilling a lifelong dream by debuting for the 1991 European Champions in the First Round Champions League play-off tie against Spartaks Jūrmala. An ever-present in Vladan Milojević’s defence, the 24-year-old has formed an impressive defensive partnership with Vujadin Savić at the back. Behind the pair stands Canadian international goalkeeper Milan Borjan who like Degenek hails from Knin and was a refugee of the Croatian War of Independence, sharing a similar migrant experience to that of the Aussie. 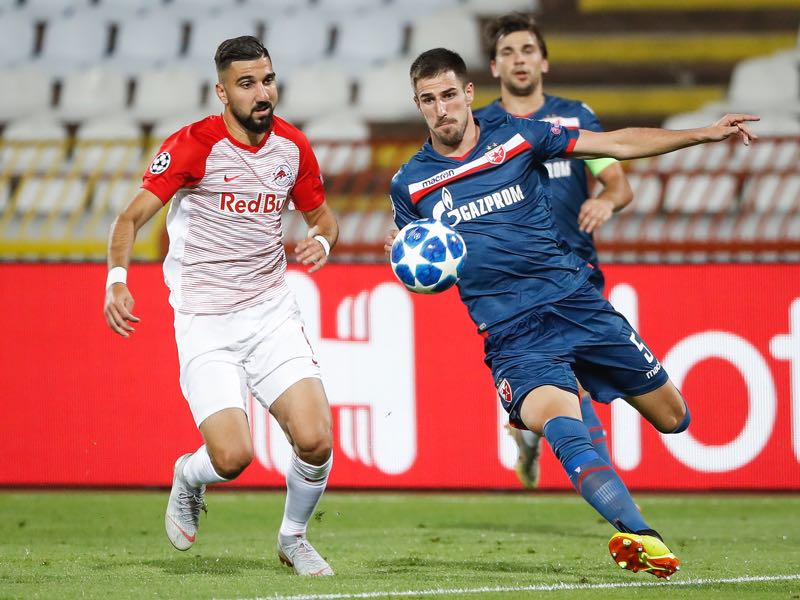 Fundamental to Zvezda’s progress to the final round of Champions League qualification were the two Knin-born natives, conceding just two goals over the course of seven playoff games ahead of their crucial away tie at Red Bull Salzburg, as the Serbian Champions sought to seal a return to the group stages after a 27-year absence. With Zvezda 2-0 down after 65 minutes of play at the Red Bull Arena on Wednesday evening, their chances of progressing seemed slim, especially given their key attacking outlet Nemanja Radonjić had been neutralised by the well-drilled RB defence.

Up stepped Degenek. The centre-back provided two assists to Comoros forward El Fardou Ben Nabouhane in the space of a minute to turn the tie in the visitors’ favour and evoke pandemonium amongst the strong contingent of travelling supporters. Zvezda held firm for the remaining half of football to seal a historic return to the upper echelons of European football as players and supporters embraced on the pitch. Upon his signing at the Marakana in July, the Socceroo had declared passage to the Champions League group stages as a dream of his. A dream he fulfilled in no time.

It has taken Degenek just 11 games to etch his name in the folklore of Serbia’s most storied sporting institute. A stark contrast to his early days of senior football which saw him appear nine times before his 21st birthday. Now the boy from Knin – via Sydney – is set to play his 100th game of senior club football in Sunday’s away trip to Vojvodina. In the coming weeks, he will rub shoulders with the likes of Mané, Mbappe, Mertens, Neymar and Salah. A remarkable achievement for a player who has had to overcome his fair share of adversity in cementing his place as a Belgrade star – 18 years after departing the city for a new start in a faraway land.