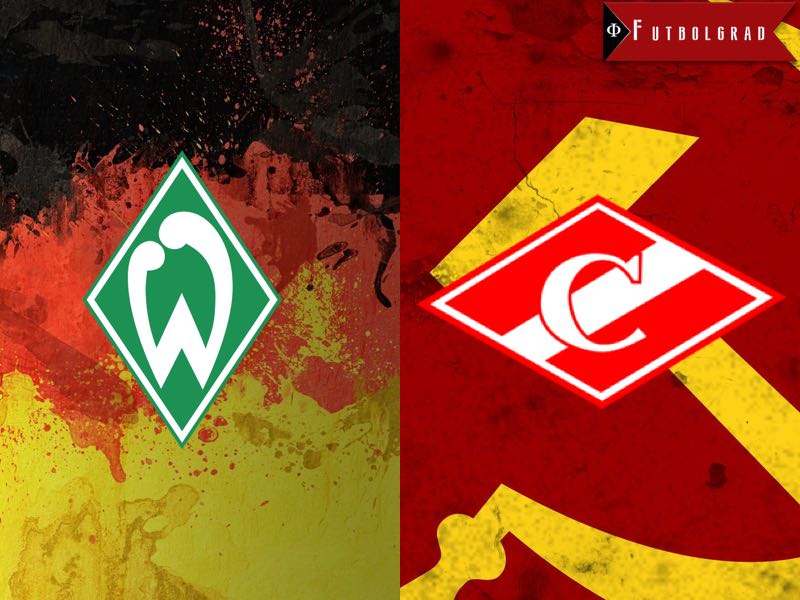 On November 4, Werder Bremen celebrated the 29th anniversary of the first Wunder von der Weser, or the miracle at the Weser, when Werder Bremen overcame a 4-1 UEFA Cup second round away defeat to eliminated Spartak Moscow at the Weserstadion with a 6-2 victory.

Bremen later achieved a similarly miraculous feat in first round of the 1988-89 European Cup, when they overcame a 3-0 away defeat to eliminate the East German champion Dynamo Berlin with a 5-0 home victory.

Over the years, the victory against Dynamo Berlin has been given far more attention than Werder’s victory over Spartak. There are good reasons for this as, naturally, the match up of the two German champions had significant political undertones, which gave the story a much stronger foundation for what is called in German “Legendenbildung” or creation of legends.

When comparing the two matches, however, it could be argued that Werder simply matched expectations against Dynamo Berlin, as the West German Bundesliga was ranked third in the UEFA 5-year co-efficient ranking. The East German Oberliga, on the other hand, was positioned 16th in the ranking, and could hardly be considered as part of the European elite.

Spartak Moscow, meanwhile, was part of a league that was thriving in the late 1980s. The dying years of the Soviet Union are often remembered in terms of the country’s crumbling infrastructure, line-ups to buy food, and general economic austerity. In terms of football, however, the late Soviet period was somewhat of a golden age. Hence, Werder Bremen’s miracle at the Weser against Spartak Moscow in terms of quality of football on display, needs to be recognized as the true miracle of the Weser.

The Soviet Vysshaya Liga was a European top competition

In 1987, the year in which Mikhail Gorbachev introduced his first major reform programs, the Soviet Vysshaya Liga ranked second in the UEFA 5-year-coefficient ranking behind Italy. The ranking, which determines the number of starters each league receives in UEFA competition, is considered the benchmark for determining the strongest competitions on the continent.

The Soviet Vysshaya Liga consistently ranked in the top three from 1985 to 1989. The main reason behind the Soviet success was that clubs had introduced reform packages in the early 1980s that improved the training of youth players.

Also, clubs introduced structural reforms that were later reflected in economic reforms of other sectors. In addition, the first clubs were privatized in 1987—the first team to do so was Dnepr Dnepropetrovsk (today FC Dnipro). It is, therefore, no surprise that the Soviet Union’s last international club trophy triumph falls in that period, as Dynamo Kyiv won the European Cup Winners’ Cup in 1986.

Hence, when Werder Bremen met Spartak in the second round of the UEFA Cup, they were facing a team that, by all measurements, was part of Europe’s footballing elite. Spartak had finished the 1986 Soviet Vysshaya Liga, which at the time was played within the calendar year from spring to fall, in third place behind champions Dynamo Kyiv, and city rivals Dinamo Moscow.

Spartak Moscow’s squad included several prominent names. In goal the club could chose between the Soviet national team keeper Rinat Dasaev, who in 1988 won the IFFHS World’s Best Goalkeeper award, and the current national team coach, Stanislav Cherchesov, who was number two behind Dasaev, but would go on to have a fantastic career.

In defence, the squad included Vagiz Khidiyatullin, who was an important part of the Soviet national team that would come in second in the 1988 European Championships in Germany. In midfield, Aleksandr Mostovoi, would later become a legend at Celta de Vigo in Spain and was in charge of the more creative elements of Spartak’s play, while upfront, Sergei Rodionov, who is now the General Director of Spartak, was in charge of scoring the goals.

Spartak vs Werder was a clash of giants

In fact, by the time Spartak met Werder Bremen, the 1987 Soviet Vysshaya Liga had almost concluded, and Spartak were in the drivers seat to win the competition—and on November 16 won the Soviet championship.

Werder Bremen, meanwhile, had finished the 1986-87 Bundesliga season in fifth place. But, by the time they met Spartak in the second round of the UEFA Cup, were halfway through the 1987-88 Bundesliga season—a title that the club later won.

Hence, the second round encounter between Spartak and Werder Bremen pitched the eventual champions of two top European leagues against each other in what became a monumental matchup.

Werder had to travel to Moscow for the first leg, which took place on October 24, 1987 at the Luzhniki Stadium in Moscow. From late October onwards, Moscow can be a hostile place to visit for any traveling football team.

Most stadiums of the late Soviet period were massive concrete bowls that would become bitter cold when the Russian winter set in. Spartak had been the strongest team in the Soviet Union that season, and it was, therefore, no surprise that 70,000 visitors came out to support the Myaso (Meat) against the future German champion.

Videos from the time make it difficult to relive the atmosphere of Soviet stadiums that could turn a cold Soviet concrete bowl into a hot cauldron. Sadly most of the video material available from the period initially brings back memories of old Soviet television sets…

What becomes evident from a closer look at the video, however, is that Werder keeper Oliver Reck, who was later, dubbed Pannen-Olli (Howler-Olli) by Werder fans, had a horrible night. Ten minutes into the game, he assisted Mostovoi, when he lost orientation on a cross and spilled the ball, and the Soviet midfielder only had to tap the ball into the empty net.

Sergei Rodionov then added a second goal for Spartak in the 35th minute after a breakaway, and then in the 55th minute added a second goal after Werder’s defence failed to clear a freekick. In the 80th minute Manfred Burgsmüller scored the vital away goal, but the tie seemed to be put to the books when Viktor Pasulko made it 4-1 for the Soviets moments before the final whistle.

Werder were utterly beaten, and faced a monumental task for the return leg at the Weserstadion. The Weserstadion was more than half empty for the return match, as only 16,000 people made the trek on what was a dreary foggy November night, to see a game that seemed already decided.

The miracle at the Weser was an incredible test of wills

Werder forward, Frank Neubarth, scored within the first two minutes after Dasaev fumbled the ball in the six-yard box, and then he added a quick second goal in the tenth minute to bring Werder within one goal of completing the comeback. Then, in the 25th minute, Frank Ordenwitz scored with a close range effort to make it 3-0, and 4-4 on aggregate. At this point, UEFA arithmetic would have meant that Werder would advance, as they had scored an away goal in Moscow. 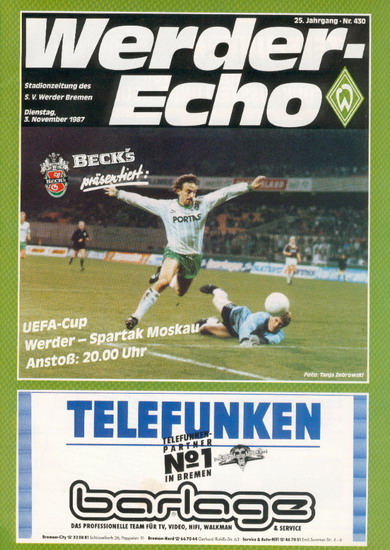 In retrospective the title picture of the Werder-Echo spreads optimism

Werder then tried to maintain the score, while the Soviets built up the pressure to get a vital away goal, which would return the advantage to them. As the fog became thicker in the Weserstadion, Fedor Cherenkov finally pulled one back for Spartak. Werder now had to score another to at least secure extra time.

Werder was not done yet and, in the 79th minute, Gunnar Sauer headed home a wonderful cross by Jonny Otten past the rooted Dasaev to make it 4-1 for Werder and 5-5 on aggregate.

Extra-time beckoned and, with it, Werder completed the unlikely comeback, as Karl-Heinz Riedle made it 5-1 with one of his trademark Air Riedle headers. The Werder crowd started to sing “Oh wie ist das schön” (how wonderful is this). With ten minutes to go in extra-time, Burgsmüller added a sixth goal to make it 6-1 on that night, and 7-5 on aggregate—a goal that later proved to be vital, as Spartak’s Pasulko pulled one back in the 111th minute to make it 6-2.

It was indeed a legendary night, and the first of several Werder Bremen miracles. In truth, however, it might be one of the most legendary encounters in UEFA Cup history, when two of the strongest teams in the competition met early on in the competition to play wide-open offensive football.

This is further underlined by the fact that both clubs celebrated national championships shortly after playing against one another. With Dinamo Tbilisi, Werder later eliminated a second Soviet team in the third round of the competition, and would eventually reached the semi-final where the fellow German club, Bayer 04 Leverkusen, who later won the competition, eliminated them. For Spartak, the end of the 1987 season saw the breakup of what had been a formidable team. Gorbachev’s reforms meant that Soviet players were allowed to move to the West, and Khidiyatullin (to Toulouse), and Dasaev (to Sevilla) left the club in 1988.