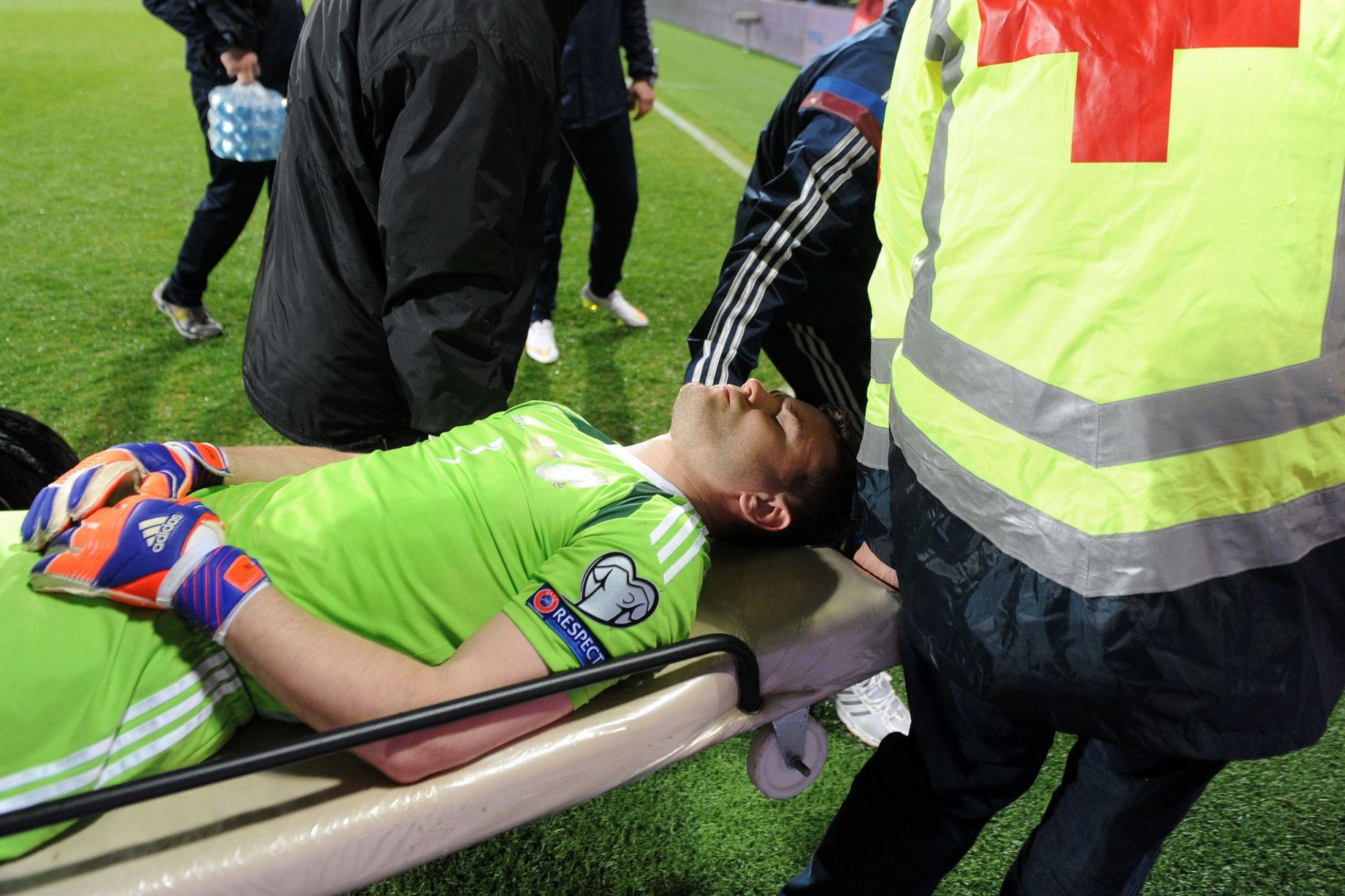 Montenegro vs. Russia – The Scandal of Podgorica

Montenegro vs. Russia was barely underway when a flare thrown by a Montenegro fan hit Russia’s keeper Igor Akinfeev. The keeper had to be transported off the field on a stretcher, and miraculously only suffered small burns to the back of his neck, as well as a mild concussion.

German referee Deniz Aytekin stopped the match for 33 minutes, but according to this Monday’s Kicker Magazine, and the Russian sports portal Sport.ru the referee was ordered to resume the match by UEFA after the president of the Football Association of Montenegro Dejan Savicevic had called UEFA president Michel Platini urging him to continue the match.

But matters did not calm down after the game was resumed but subsequently abandoned after the Russian player Dmitri Kombarov was hit by an object thrown from the stands. Some Russian players later reported that lighters, flares, and even knifes were thrown. The scandal was complete when Russian and Montenegrin players began to brawl on the pitch.

On Saturday the Montenegrin newspaper Vijesti declared this is “the end of football as a civilized sport in the country”. In truth, however, this is just the latest in a series of incidents involving a team from the Balkans. In October 2014 a game between Albania and Serbia was abandoned after a drone carried a nationalist Albanian banner into the stadium, which included Albanian nationalist claims over Serbia’s territory.

Meanwhile, Montenegro’s coach Branko Brnovic has issued an apology to the Russians on behalf of his players. It is uncertain what kind of punishment UEFA will issue to Montenegro, but as Brnovic points out: “Fortunately, our FA president Dejan Savicevic has a very good reputation with UEFA.”

Just three days before the match Platini said that: “Europe risked a return to the “dark days” of its hooligan-plagued past.” While UEFA must award the three points to Russia, and will certainly force Montenegro to play several games behind closed doors, Savicevic’s influence at UEFA make it likely that Montenegro will not face any additional sanctions such as disqualification from Euro 2016. But not being steadfast in this matter will do little to curb the problems of fan-violence in the Balkans and the post-Soviet space.

Meanwhile back in Russia the Sbornaia players were praised for their heroism in trying to continue the match under difficult circumstances. At the same time, however, the Russian media has to be careful about being to smug over this incident, as Russian football itself has seen its fair share of fan violence, including an incident in which Dinamo Moscow keeper Anton Shunin was hit by a flare thrown by Zenit fans at a game that took place in November 2012.

Furthermore, Russian fans may have also been responsible for several incidents surrounding the match in Podgorica this weekend. For example Russian and Serbian fans in the stands were also throwing flares, and displaying Novorossiya flags, as well as showing banners proclaiming Serbian-Russian brotherhood in what Montenegro fans must have viewed as a clear provocation. It appears therefore that Podgorica may just be another chapter in the black book of fan violence.