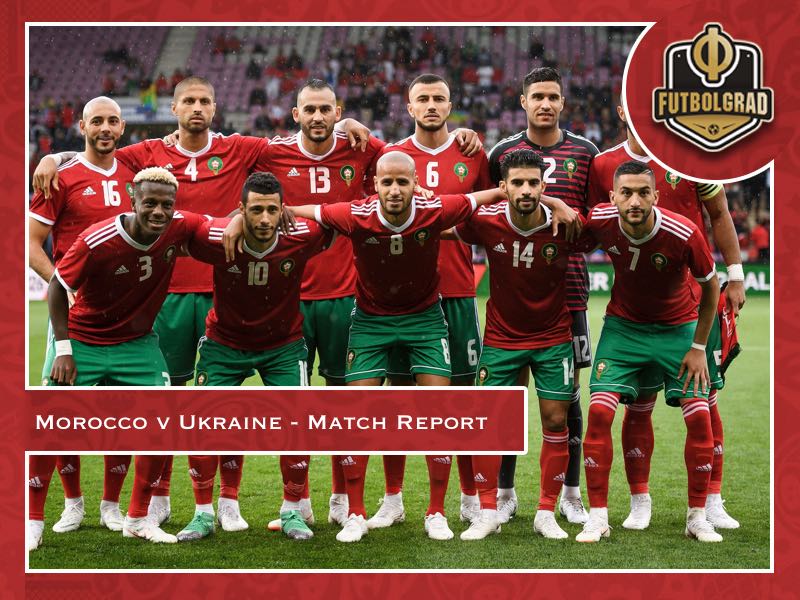 Morocco and Ukraine battle to a goalless draw in Geneva

Morocco v Ukraine ended in a goalless draw as the Atlas Lions earned a positive result in their preparations for the FIFA 2018 World Cup this summer.

Morocco’s preparation for the FIFA 2018 World Cup is off to a good start as the Atlas Lions kept a clean sheet and controlled the majority of the match. Ukraine, on the other hand, was able to start a more youthful squad, which could prove vital for the upcoming UEFA League of Nations competition this fall.

Morocco started the match and had the earliest chance of the game, where a free kick on the edge of the box just glanced at the far post. As Ukraine continued to search for its fluidity, the Moroccans dictated the flow of play.

The Yellow-Blues eventually found their first opportunity in the 11’ when a Konoplyanka cross was poorly dealt with by Munir. Viktor Kovalenko went to hit the rebound but was expertly blocked by the strong Moroccan defence. Ukraine then had a series of chances as they maintained possession from a corner, yet the Atlas Lions broke on the counter and nearly opened the score. Ukrainian goalkeeper Andriy Pyatov failed to collect a cross and Hakim Ziyech smashed the ball towards goal. Pyatov atoned for this error, however, and kept the Moroccan at bay.

A second Ziyech shot was later blocked in the 22’, where he was denied by both Pyatov and the far post to keep the score level. Nordin Amrabat also had an opportunity to take his side ahead, as Pyatov rushed nearly thirty yards out of his goal. Unfortunately, the winger was unable to properly angle his shot, and the ball flashed narrowly wide of the goal. By halftime, things remained level at the Stade de Geneve.

Following the restart, the Ukrainians had a much better half and grew into the match. The Ukrainians perhaps had their best opportunity in the game in the 56’, which was also the talking point of the match, when Konoplyanka released Marlos on goal. The Brazilian-born midfielder only had Munir to beat, but an onrushing Hamza Mendyl cleared the ball while also taking down Marlos. Replays showed that the Moroccan had made contact with the ball, though it could be argued that Mendyl saw more of Marlos than the ball. Regardless of what unfolded, a penalty was not awarded and the match went on.

In a rather drab affair, the game seemed destined to end at 0-0. As the game came closer to a close, Ukraine began to set up shop to earn a draw. Ziyech nearly stole the show, however, in the 84’ when he had another opportunity to open the scoring. Pyatov came low to parry the shot, and the Moroccans were unable to find the back of the net.

Overall, the match was rather dull with very few goal scoring opportunities. Perhaps the two most entertaining parts of the match were caused by the Moroccan fans. In the first encounter, the match was temporarily halted in the 76’ when a Moroccan fan ran onto the pitch. While some of the players had a laugh, the security quickly escorted the pitch invader off of the field. Then, when the match ended, a series of Moroccans rushed the field, asking their national team players for autographs and photos.

With the conclusion of this game, both sides will now look towards their upcoming matches. Morocco will face Slovakia on Monday in its second of three friendlies leading up to the World Cup. Meanwhile, Ukraine will face Albania on Sunday in its final friendly before the summer break.

Though the match ended goalless, Hakim Ziyech played a central role in this game. The attacking midfielder came close on several occasions to open the scoring, and should this work ethic continue in his side’s remaining friendly matches, he will surely serve as a crucial asset for the Atlas Lions in this summer’s major competition.

After drawing several defenders, Ukraine’s Yevhen Konoplyanka released Marlos through on goal. The Brazilian-born midfielder then meandered forward, with only Moroccan goalkeeper Munir to beat. Hamza Mendyl, however, had other plans, and he took out Marlos while clearing the ball. Replays suggest that the Ukrainian could have been awarded a penalty, which could have altered the result in this match.

Mark Temnycky covers the Ukrainian men’s national team and Ukrainian clubs competing in the UEFA Champions League and Europa League. Outside of Futbolgrad, he is also a contributor covering Manchester City for SB Nation’s Bitter and Blue. Follow him @MTem33