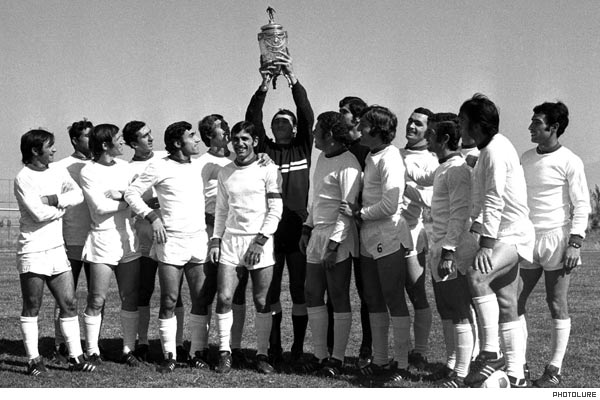 New Unified League – Back to the Soviet Union?

In the last couple of months the spectre of a new football league has haunted Europe: a new Unified League that would bring together the best teams of the former Soviet Union. The Unified League is a proposal is not new; in fact the President of the old Football Federation of the USSR Viacheslav Koloskov tried to preserve the old Soviet championship even after the fall of the Soviet Union.

When the Soviet Union collapsed Koloskov announced plans to create a new championship that would include clubs from as many of the former Soviet Republics as possible. Koloskov was adamant even as the system collapsed that he could preserve this Soviet institution. Then in the spring of 1991 Koloskov proposed a championship that included clubs from Transnistria and South Ossetia. The trouble was that both regions belonged to the independent states of Moldova and Georgia respectively.

Koloskov believed that including clubs from disputed territories would gain him political backing. But the big five clubs from Moscow – Torpedo, Spartak, Lokomotiv, CSKA, and Dinamo – then published a memorandum in which they withdrew any support for a CIS championship; they felt that football was not a political weapon, both Transnistria and South Ossetia had become battle grounds, and the Moscow clubs had no desire to compete in a so-called war zone. It was a desperate attempt to preserve the old Soviet championship; Koloskov overestimated the political influence and as a result the Soviet Supreme League was dead. Instead the now independent states of the former Soviet Union formed their own national football leagues and competitions.

The Commonwealth of Independent States Cup

The competition included clubs like the old Soviet champions: Dinamo Kiev, Spartak Moscow, Dinamo Tbilisi, and Dinamo Minsk, but also new faces such as Sheriff Tiraspol and Inter Baku. At first the competition was received enthusiastically. Sponsored by the company “Lotto Million” – owned by the Greek businessman Marcos Shiapanis – paid the winner US$ 50,000. This was a lot for the cash-strapped teams of the former Soviet Union. But, in 1992 UEFA introduced the Champions League, and with the explosion of television and sponsorship deals in European football the CIS Cup soon became a third-rate competition. The big clubs from Russia, and Ukraine now focused on European club football, and sent their reserve teams to compete at the CIS Cup.

In addition, the economics of the big clubs in Russia and Ukraine changed in the late 1990s and early 2000s. Many of the big clubs were now owned by the nouveau riche or oligarchs. Those were men that made the most of the mass privatization of state assets during the Yeltsin period.

The most prominent examples in Russia and Ukraine are clubs like CSKA Moscow, Spartak Moscow, Dinamo Kiev, and Shakhtar Donetsk. Then in the early 2000s the energy giant Gazprom bought Zenit Saint Petersburg. Thanks to the oligarchs, and the energy companies that they own, the clubs have almost limitless budgets thus enabling them to compete with the best in Western Europe.

But there was a catch. None of the above mentioned clubs are self-sustainable; they are all completely dependent on constant cash injections.

A New Dawn: A new league for the newly rich?

Financial Fair Play is designed to prevent overspending in European club football: clubs were now forced to limit the amount of debt they were generating, and to compel clubs to spend within the means of the club’s monetary budget without the help of investors. FFP represents a problem for clubs from Russia and Ukraine. There is almost no revenue besides the oligarchs, TV-stations in Russia and Ukraine pay next to nothing for television rights, and ticket prices are cheap in comparison to Western Europe. In the face of such uncertainty, came Aleksei Miller arrived with the intention to change the status quo. Miller (below) is the chairman of Gazprom, the company that incidentally owns Zenit Saint Petersburg. In December 2012, Miller proposed a new league that would include the best teams from all over the former Soviet Union.

In Russia, a new body was created under the auspices of Valerii Gazzaev, president and manager of Alania Vladikavkaz. Gazzaev is a notable figure in Russian football having won several Russian championships, and leading CSKA Moscow to European glory when the club won the 2005 UEFA Cup. Gazzaev was put in charge to create a new competition with the aim of creating a league starting as early as 2014. Only a few days ago, the members of Russia’s biggest clubs met with representatives of the Ukrainian Premier League to discuss the proposed new league.

Gazprom offered €1 billion in prize money for the new league

The league would include nine teams from Russia and nine from Ukraine; every starter would receive €22 million, and the winner would receive more than €90 million. Miller also stated that teams from other countries of the former Soviet Union would be welcome to join. The Ukrainian Premier League has stated that they would have to talk to their member clubs first. It is, however, hard to imagine that the Ukrainian clubs would decline such an amount of money.

But what do FIFA and UEFA say to the new  Unified League proposal? FIFA president Joseph Blatter has been outspoken, and stated that he was against the creation of such a competition. FIFA, however, in this case has no jurisdiction; it is up to UEFA whose president Michel Platini has been uncharacteristically quiet on the subject.

Gazprom sponsors the UEFA Champions League, and it is hard to imagine that Platini and UEFA will object to the new  Unified League.

One of Germany’s largest newspapers, Die Sueddeutsche, also reported that Platini would be positive towards such a project – after all Platini arguably became president on the back of support from Eastern European member states.

One thing is for certain – the new Unified League could change the face of European football.

If the league becomes a reality, other countries of smaller competitions might follow and create new international leagues. There are already proposals to merge the leagues of Belgium and the Netherlands, and to create a new Czechoslovakian competition. In any case the developments in Russia and Ukraine are exciting, which may alter the footballing landscape considerably.