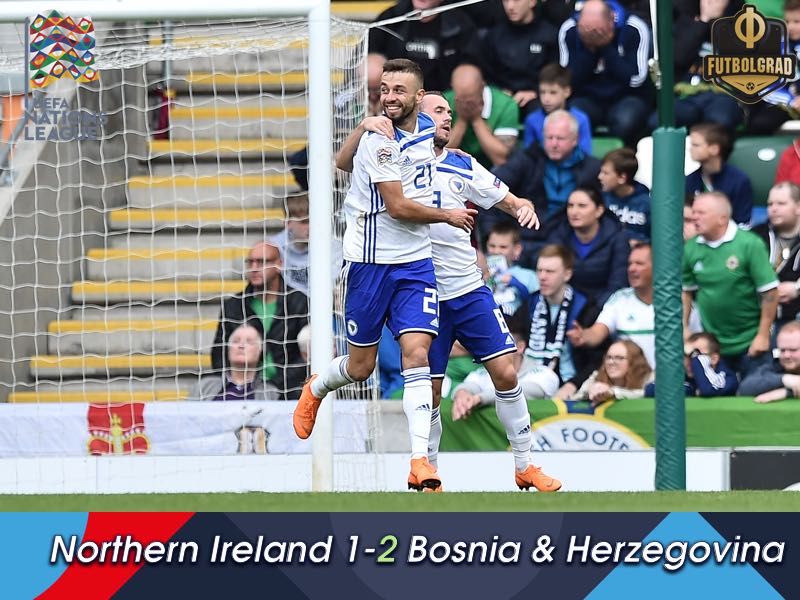 BELFAST—Northern Ireland v Bosnia and Herzegovina kicked off the action in the UEFA Nations League with the Balkan side collecting all three points on the road.

Delighted by the performance, devastated by the result.  Those were the feelings of Michael O’Neill as he watched his side get off to the worst possible start in the UEFA Nations League on Saturday.  Goals from Haris Duljevic and Elvis Saric sealed a 2-1 victory for Bosnia in Belfast, in a game that many neutrals will feel the hosts should have won.

Northern Ireland started well, with George Saville leading the press as the visitors failed to settle. Within a minute, the on-loan Middlesbrough man was brought down for what seemed like an obvious penalty.  Referee Pavel Královec, however, was unmoved as the crowd jeered.

The Zmjelavi continued to dither, with Gojko Cimirot conceding a needless handball just outside his own area after five minutes.  The impressive Oliver Norwood could only fire the resulting free-kick over the bar, but the early signs from O’Neill’s men were encouraging.  Robert Prosinecki’s frustrations were apparent when left-back Eldar Civic plunged into a needless tackle on Steve Davis in the tenth minute, drawing the match’s first yellow card.

Davis, who had been presented with an award to mark his hundredth cap for Northern Ireland before kick-off, combined well with Niall McGinn on the right-hand side moments later. The latter’s cross, however, failed to meet a green shirt inside the box.

McGinn again found space on the flank shortly after, breaking the offside trap before firing a comfortable effort straight at goalkeeper Ibrahim Sehic.  As the visitors struggled to clear, the ball fell to Stuart Dallas outside the box, but his fizzing effort sailed inches wide.

Jamal Lewis, making his first competitive start in a Northern Irish shirt, had looked slightly nervous in possession until that point.  The Norwich wing-back grew gradually into the game, however, trundling down the left superbly to find George Saville unmarked in the centre.  The ever-industrious Kyle Lafferty, however, took the ball away from his teammate to fire a lame effort wide.

With twenty-five minutes gone, Bosnia had yet to register much in the way of attacking threat. Pjanic looked marooned alongside Cimirot and Elvis Saric, both of whom struggled to negate the impressive triumvirate of Norwood, Davis and Saville. It was Norwood again who found Jonny Evans unmarked from a corner on 29 minutes, but the Leicester defender couldn’t’ direct his header on target.

Moments later, Edin Dzeko fired a reminder.  The Roma striker released Edin Visca down the left, who fired a superb return into the box.  Dzeko’s instinctive effort was palmed away nervously by Bailey Peacock-Russell, the Leeds keeper having had little to do until that point.

Northern Ireland failed to heed the warning.  Just after the half-hour mark, Miralem Pjanic advanced unopposed into the home half.  Curling a beautiful wedge out to Dzeko on the left, he watched his teammate guide an intelligent low cross into the path of Haris Duljevic.  The big number 9 slotted the ball superbly under Peacock Farrell to give his side the lead.  Conor McLaughlin, whose lazy challenge had failed to close down the cross, should have done better.

The goal calmed the Bosnian nerves. Suddenly, Pjanic was breaking the Irish lines with ease, but it was the hosts who had the best chance before the break.  Another fantastic ball from Norwood grazed the head of Kyle Lafferty, the Rangers man stretching every sinew only to see his header drift harmlessly wide.

Moments after the restart, a dangerous cross in from the right found Stuart Dallas completely unmarked.  Only a fingertip save from Sehic stopped an equaliser as the ball floated over the bar.

Bosnia looked nervous again as the second half progressed, with a clumsy challenge from Dzeko on Evans bringing another yellow card.  On 54 minutes, a  free kick from the left found Lafferty unmarked at the far post.  Once more, the gloves of Sehic denied the Rangers mans’ stab at the far post.

Intense pressure followed from the home side.  After Dallas’ shot was blocked, Conor McLaughlin rose within centimetres of heading in the resulting corner. Lewis, who was a constant menace to Saric and Besic down the left, continue to careen forward in support of the attack.

Moments later, disaster struck.  An aimless long ball was headed right into the path of Saric by the despairing Craig Cathcart. The winger tapped the ball through Peacock-Russell’s legs before depositing the ball into the empty net.  2-0.

On 68 minutes, O’Neill threw caution to the wind.  Liam Boyce came on for McLaughlin, with the tiring Lafferty making way for Will Grigg.  Boyce’s impact was immediate, with the former-Cliftonville striker tumbling a dangerous low cross into the Bosnian box minutes later.

Dallas continued to find time and space down the left, abetted by the tremendous overlaps of Lewis behind him.  The visitors, however, remained steadfast in their rebuttals, dropping deeper to invite wave after wave of green-shirted attacks.

With 82 minutes gone, the home support was granted a rare moment of pleasure as Sehic was booked for timewasting.  With the job seemingly done, Prosinecki placed his Rolls Royce back in the garage, withdrawing Pjanic in favour of Riad Bajic.

O’Neill’s side never gave up, frustrated further when some pointless showboating from Sehic wasn’t punished by Boyce.  Northern Ireland continued to press, but Bosnia remained resolute.  Even Dzeko as pulled into his own box as the visitors defended the clean sheet.  The hosts, despite all of their effort, could muster little in the way of an incisive edge.

A reprieve was granted when the fourth official indicated six minutes of added time.  Bosnia failed to clear a corner, with Boyce slamming a cross back into the six-yard box.  Grigg, who had done nothing until that point, did what he always does.  Hooking superbly onto Boyce’s delivery, he fired into Sehic’s bottom corner.

It was Grigg again who found himself with an inch of space moments later.  A high ball from the right was knocked down by a green shirt, with the Wigan man flinging himself towards the ball.  This time, he couldn’t connect as the Windsor crowd agonised for the equaliser.

Northern Ireland v Bosnia and Herzegovina – Man of the Match

Jamal Lewis was the man of the match. Making his competitive debut, showed impressive pace and energy on the left. Got forward superbly to assist Stuart Dallas and made a number of dangerous crosses. Chris Brunt is a hard man to replace, but if Lewis can build on this performance, he’ll be a real asset once qualifiers kick off in the Spring

With friendlies against Israel and the Republic of Ireland to follow, O’Neill will have been hoping for more momentum. There were positive signs in this performance, however, even if they were caveated by moments of poor defensive concentration from his players.  This wasn’t the result they wanted, but it was a performance they can build on, 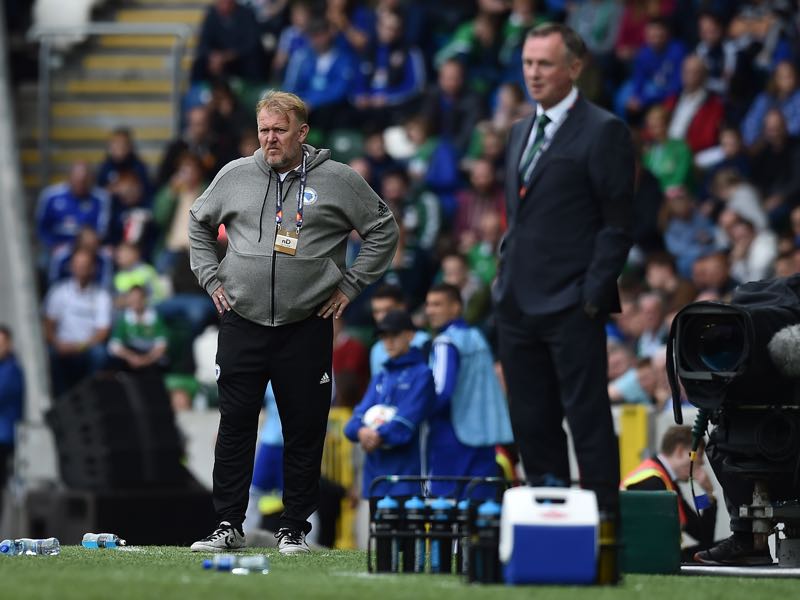 Northern Ireland v Bosnia and Herzegovina. Both coaches can take a lot of positives from this performance (Photo by Charles McQuillan/Getty Images)