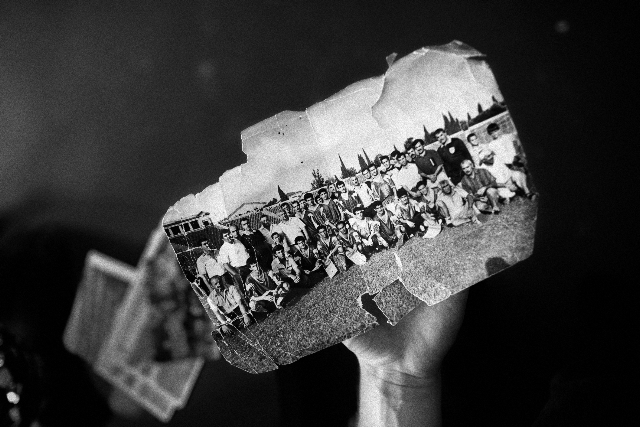 Offside – Football in Exile in Nagorno-Karabakh

Offside – Football in Exile in Nagorno-Karabakh –

The geopolitical conflict in the Nagorno-Karabakh region is a forgotten one. Even as the war raged between 1991 and 1994, it received little attention from the West. Today, the unresolved yet frozen conflict remains a stark reality for up to several hundred thousand Azerbaijani and Armenian refugees. In OFFSIDE – Football in Exile, photographer Dirk-Jan Visser and writer Arthur Huizinga tell their story from the perspective of two football teams: FK Qarabağ Ağdam and FK Karabakh Stepanakert.

When the draw for the UEFA Europa League play-off round in 2009 paired Borussia Dortmund with FK Qarabağ Ağdam, few would have known that ‘die Borussen’ would be playing a refugee-team from a ghost city. FK Qarabağ Ağdam are an Azerbaijani football club currently based in the capital Baku, longing for a return to its home ground in Ağdam. Even during the war with ethnic Armenians over Nagorno-Karabakh, the Imaret stadium in downtown Ağdam remained packed for home matches. In 1993, Karabakh-Armenian forces occupied and destroyed Ağdam and it has remained derelict ever since.

The club survived though and became a symbol of hope and pride for over half a million refugees scattered across Azerbaijan, many of whom still live in temporary settlements within a few kilometers of the frontline. Although Azerbaijani and Armenian leaders have been negotiating a final peace-treaty for almost 20 years, the cease-fire agreement which cemented an ‘armed peace’ is still in force. Despite this move away from a fully-armed conflict, the frontline remains dangerous with around 30 people (including civilians) killed by snipers each year.

Azerbaijanis and Armenians are bitter enemies today, with Nagorno-Karabakh the central cause. However, the mountainous region in the Caucasus used to be a place where Armenians and Azerbaijani lived peacefully side by side. Following the communist takeover in 1922, the area was given an autonomous status within the Azerbaijani SSR. The borders were drawn in a way that produced a clear Armenian majority. 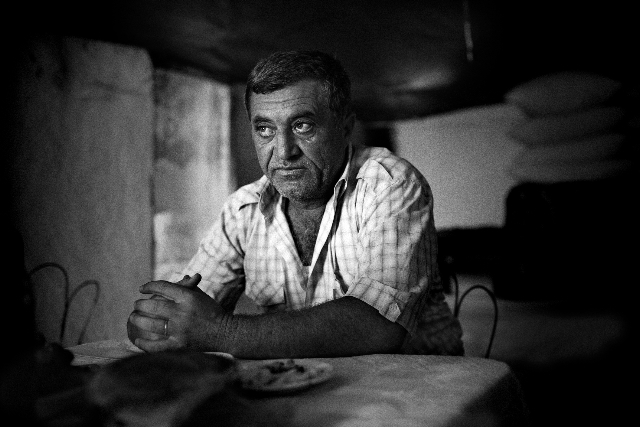 Yasem Guliyev (1965), a former labscientist from Ağdam, lives with his family in a mudhouse in the Dörd Yol-refugee settlement near the frontline. Photo: Dirk-Jan Visser, August 2009.

The historical flatlands of Karabakh, with its capital of Ağdam, fell outwith Nagorno-Karabakh’s newly drafted borders. In the new capital of the region, an Armenian football team by the name of FK Karabakh Stepanakert were established in 1928 and a fierce football rivalry was expected to develop from 1951 upon the formation of FK Qarabağ Ağdam, just 25km up the craggy mountain road. 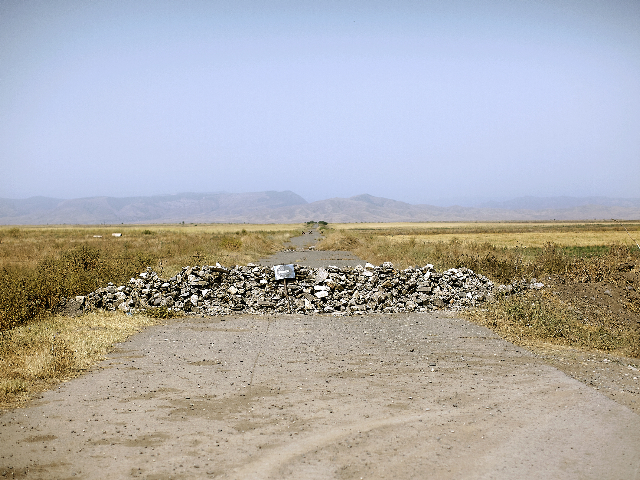 The road to Ağdam from Azerbaijan is blocked since the ceasefire-agreement of 1994. Photo: Dirk-Jan Visser, 2011.

However, initially the clubs scarcely competed against each other and when they did things were amicable.  In the 1980s, FK Qarabağ Ağdam and FK Karabakh Stepanakert occasionally played friendly matches after which the host team always invited its opponents to a banquet. Back then, football diplomacy between the two communities was perfectly natural.

Football in a warzone

As war broke out in February 1988, the football team of Karabakh Stepanakert stopped playing and took up arms in defence of the Armenians in the region. In Ağdam, though, FK Qarabağ Ağdam continued in spite of the harsh and dangerous conditions. After the bloody events in Khojaly in February 1991, a delegation of football players from FK Qarabağ Ağdam approached the city’s commander. ‘We want to defend our city,’ they said, ‘let us go to the front.’ ‘Absolutely not,’ was the commander’s reply. ‘It is your job to keep playing football. Thanks to the matches, people can think about something other than war once a week. Footballers don’t fight!’

At the start of the 1992-1993 season – the second championship of independent Azerbaijan – FK Qarabağ Ağdam were a competitive side. It was also the first year at the top level for Aslan Kerimov (Baku 1973). This teenage footballer had agreed to start his career as a professional football player while inside a warzone in return for a blue Lada which was promised to him. That year the team won every home game except for the very first, although some matches had to be cancelled when incoming missiles from the mountains came too close to the Imaret stadium. In June, winning the national cup was the first reward for the team’s resilience.

Less than two months later, on 1 August 1993, FK Qarabağ Ağdam also took the Azerbaijani league title, which remains its only league victory in the club’s history since independence. However, by now the club had been forced to relocate to Baku and depressing news from Ağdam overshadowed the players’ historic achievement. Ağdam had been captured by Armenian troops a fortnight earlier with the players informed about this only two days before the season finale. After the game most players rushed back in search of displaced family and friends.

Twenty years later, the refugee tents have disappeared and only a few families remain living in train carriages. Those who were lucky – or had the right connections – got a prefab house from the government in new settlements. And although the geometric banality of these settlements must do little to alleviate a gloomy mind, the new dwellings were a vast improvement for thousands of remaining refugees. 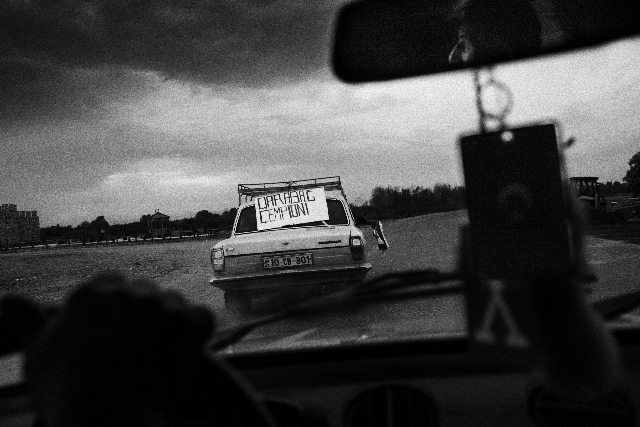 FK Qarabağ Ağdam-fans from Dörd Yol-settlement celebrate their team’s 2-1 victory over title favourite Khazar Lenkaran. That game was played in the refugee settlement of Guzanli close to the frontline, which hosted most of the homegames by FK Qarabağ Ağdam in the 2009-2010 season. Photo: Dirk-Jan Visser, 2010.

Everyday life in the refugee settlements is still dominated by unemployment, boredom and a total lack of prospects. This explains why many cling to football for hope and for 90 minutes of joy, funnelled through escapism. Until 2009, FK Qarabağ Ağdam had sent an old city bus from Baku to the refugee settlements close to the frontline every week to take supporters to their games. In May 2009, FK Qarabağ Ağdam returned to the Ağdam region to play three league games in a newly-built stadium built by the government. Some weeks after FK Qarabağ Ağdam ‘returned’ to the Ağdam region, the team won the Azerbaijani national cup and qualified for the very first edition of the Europa League.

In anticipation of the Europa League encounter with the Norwegians Rosenborg BK, FK Qarabağ Ağdam asked UEFA if they could hold a minute’s silence before kick-off. The match against Rosenborg took place on 23 July 2009, exactly 16 years after Karabakh-Armenian soldiers captured Ağdam. ‘No problem’ was the response. ‘Who died?’ ‘Who? Hundreds of people died. It was a war!’ UEFA vetoed the tribute.

FK Qarabağ Ağdam eliminated Rosenborg BK with a sensational 1-0 victory in front of almost 30,000 fans with Aslan Kerimov wearing the captain’s armband that evening. With over 13 seasons at the club, Kerimov had become the epitome of FK Qarabağ Ağdam. He earned a record 75 caps for the Azerbaijani national team, many as captain. While most of his teammates from 1993 had now become coaches and administrators at the club, smoking strong cigarettes while sharing tea and memories, Kerimov kept as fit as a Karabakh horse. 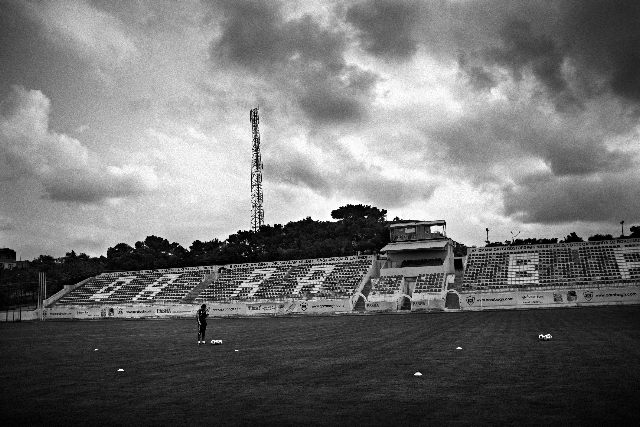 The Tofiq Ismayilov-stadium in the Surakhani-area of Baku during training practice. The stadium is a temporary rent from Azerbaijani top team Neftchi Baku. Photo: Dirk-Jan Visser, 2009.

From 2009 until 2012, FK Qarabağ Ağdam made three impressive winning runs in Europa League qualification. In 2010/2011, the squad defeated Wisla Krakow convincingly and qualified for a rendezvous with Borussia Dortmund. In the overbearing Westfalenstadium in Dortmund, Aslan Kerimov watched from the bench as his team went down 4-0. To show that ethnic tensions can still flare up even thousands of miles from the Caucasus, during the match the visitors demanded the removal of an Armenian flag in the vast 30,000 capacity Sudtribune.

Meanwhile, the fate of FK Karabakh Stepanakert took a different course. Success in the war proved detrimental to the footballing fortunes of the Armenian community in the de facto Republic of Nagorno-Karabakh. FIFA and UEFA take the official position that prohibits professional football in disputed territories. As a result, football has become a game for schoolboys only. Year after year, the football association of the unrecognised Republic of Nagorno-Karabakh submit a petition asking to join the Armenian football leagues from Stepanakert, rejected repeatedly by FIFA.

It is usually the policy of FIFA and UEFA to try and keep their distance from political tensions but the latter were forced to step in during the euro 2008 qualifiers.. After the draw for the qualifiers in Austria and Switzerland put Armenia and Azerbaijan together in the same group the two sides proceeded to argue relentlessly about safety measures and possible neutral grounds for the fixtures.

With no agreement forthcoming, UEFA took an unprecedented decision to cancel the games altogether with no points awarded to either team. For the next draw for the qualifying round of the European Championships in 2012, UEFA had decided in advance that the adversaries could no longer be drawn against each other (this was also the case for 2014 World Cup qualifying – the same arrangements have been in place to keep Georgia and Russia apart since the 2008 war).

The prospect of the Karabakh derby returning any time soon is a distant one, and what would happen if the fixture was to be revived is left to hypothetical speculation. Football’s power to unite can be stronger than its ability to divide though. For the people of Ağdam: as long as there’s football, there’s hope.

Dirk-Jan Visser (1978) is an independent documentary photographer. In 2005 he published Brave New Kosovo, about the people of Kosovo on the brink of transformation. He was rewarded with the title Dutch Photojournalist of the Year 2007 and received a special recognition in the POYi World Understanding Award for his photobook Zimbabwe Exodus.

Arthur Huizinga (1980) is a freelance journalist and writer. His work on the South Caucasus was published in several (inter-)national newspapers and magazines. His non-fiction novel Nooit een thuiswedstrijd. Een voetbaloorlog in de Kaukausus (Never a homegame. A football war in the Caucasus) on FK Qarabag Agdam and the Nagorno-Karabakh conflict is part of the 2013 competion for Dutch Sportsbook of the Year.

Order the book Offside. Football in Exile at: www.ydocstore.org/offside