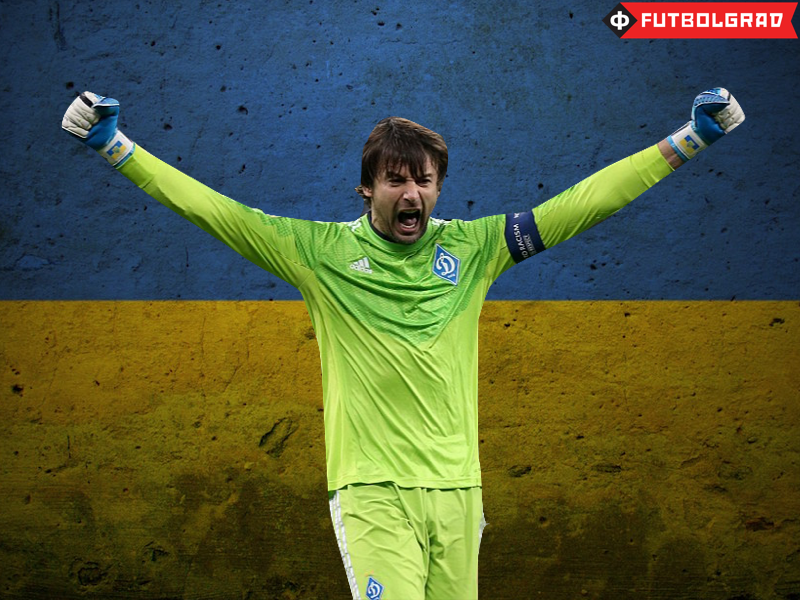 This weekend Oleksandr Shovkovskyi, Dynamo Kyiv’s long term goalkeeper turned 41. Despite his age, he still believes firmly that he has a lot to offer on the pitch and he has the trust of Dynamo President Ihor Surkis and manager (and former teammate) Serhiy Rebrov.

Reports emerged during the week that Sasho, as he is known by fans and teammates, would not renew his contract and would retire at the end of the current campaign. On his official facebook page, however, Sasho dismissed the reports as nonsense, and indicated that he is willing to continue his career.

Shovkovskyi Has Won 28 Titles in Ukraine

Shovkovskyi made his debut for Dynamo in 1993, has been the club’s number one since 1994/95, and was only dislodged for a couple of seasons due to injury. The year 1994 was also the year of his international debut and he went on to claim Zbirna’s number one shirt, which he has held for the majority of his career.

Shovkovskyi has won thirteen Ukrainian Premier League Titles, ten Ukrainian Cup titles, five Ukrainian Super Cup titles, as well as multiple individual goalkeeper of the year awards. The Dynamo skipper amassed 92 caps for Ukraine, including at the 2006 World Cup in Germany, where he became the first goalkeeper to keep a clean sheet in a penalty shoot-out (in the FIFA World Cup) against Switzerland in a victory that saw Ukraine reach the quarterfinals of the competition.

He is one of a dying breed of player—the one-club man. He is often compared to the likes of Ryan Giggs, Paulo Maldini, and Francesco Totti as one of the European great long serving one club men. His longevity at Dynamo has seen him overtake Oleh Blokhin as the leading appearance maker for the white and blues, with over 600 appearances in all competitions including over 100 in the UEFA Champions League.

There have, of course, been lows in his long career. One that has recently been recounted was his error for Ukraine in the Euro 2000 qualification play-off match against Slovenia—which Ukraine lost. Shovkovskyi’s poor clearance from outside his area landed straight at the feet of the Milenko Ačimovič, who fired home from forty yards. This affected him seriously; over the next couple of years he suffered from injury and his form was not the same as it had been in the late 90’s, when he was nominated for the Ballon D’Or. Over time, however, he overcame these struggles and returned to his fine form.

A more serious setback for Shovkovskyi was when he suffered a significant injury in the penultimate league game of the 2011-12 season. Despite having been dislodged as Ukraine number one by Shakhtar Donetsk’s Andriy Pyatov, Sasho had reclaimed the number one position in the Ukrainian national team. Unfortunately for him, disaster struck when he suffered a serious shoulder injury in one of Dynamo’s final league games before the Euro’s; the injury required surgery and ended Shovkovskyi’s international career.

As with his previous reversals, Shovkovskyi bounced back and hit top form. With the recent appearance of rumours about his future, it would be best for Shovkovskyi to continue pulling out fantastic performances and inspiring his side to further success. Although time eventually catches up with all players, there is still life in Shovkovskyi and it would be unwise to bet against his adding even more glory to his already golden career.

At the same time, there is growing discussion in the media regarding to Dynamo’s long-term replacement for Shovkovskyi. His current understudies at the club, Olexandr Rybka and Maxym Koval (currently on loan at Odense), are both capable and it will be interesting to see if Rebrov will stick with them or make a move elsewhere.

In recent weeks, Dynamo have been linked to their former keeper Denys Boyko (FC Dnipro) and Maccabi Tel Aviv’s young Serbian stopper Pedrag Rajković. Boyko has been heavily linked with a move to Sevilla in recent days, but Dynamo could hijack a potential deal in order to have a keeper in the pipeline in case Shovkovskyi retires.

The speculation about Sasho’s future and who will eventually replace him at Dynamo will continue until he officially hangs up his gloves—gloves that Sasho used to take to bed with him as a child. Until that day happens, we should enjoy watching this outstanding example of loyalty and inspiration for as long as he plays the beautiful game.

Petro Chymera, is the Vice-President of the UK Ukrainian Sports Supporters Club and Co-founder of the DonetskWay blog & the Viktor Leonenko Hall of Fame. Follow Petro on twitter – @PMChymera89 & @DonetskWay2012