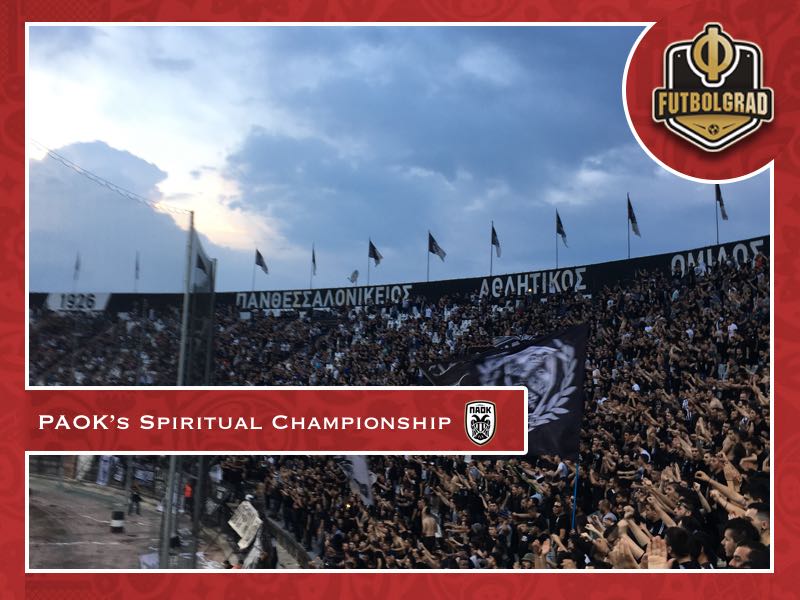 It is the final day of the season and AEK Athens have already wrapped up the Greek SuperLeague title after PAOK have been deducted points for various instances of crowd trouble and also for the conduct of their Russian oligarch owner Ivan Savvidis. As a result, AEK are first in the table with 70 points, followed by PAOK with 64 points and Olympiacos with 57 points.

The fact, that Olympiacos, for the first time in seven years, have been dethroned would be a story in itself. Owned by the powerful businessman Evangelos Marinakis Olympiacos had a stranglehold over Greek football that is finally broken by AEK’s title this season. But for fans of PAOK that counts for very little.

In many ways, it is just another title won by a club from the capital, which has dominated Greek football throughout the history of the sport in this country – Athens or Piraeus based clubs have won all but six titles in the last 91 years. Two of those six titles have gone to Thessaloniki based club PAOK, which makes them the second most successful club in the city after rivals Aris FC. PAOK, however, had not won a title since 1985.

The pictures of Savvidis’ storming the field with a gun holstered to his belt in the match against AEK have of course gone around the world. That particular incident capped off a season in which crowd trouble has been a constant problem during Greek SuperLeague games and at PAOK, in particular, were punished on several occasions and as a result, had to play ten games this season without fans being permitted inside the ground.

Savvidis, in turn, has not been completely innocent when it comes to steering up problems in the stadium. In constant combat with the Greek authorities in Athens, the oligarch has created an “us against them” mentality among PAOK fans. That sort of mentality was then echoed in his open letter to the fans ahead of the final matchday against Platanias on May 5. Published on PAOK’s official homepage Savvidis wrote on May 5: 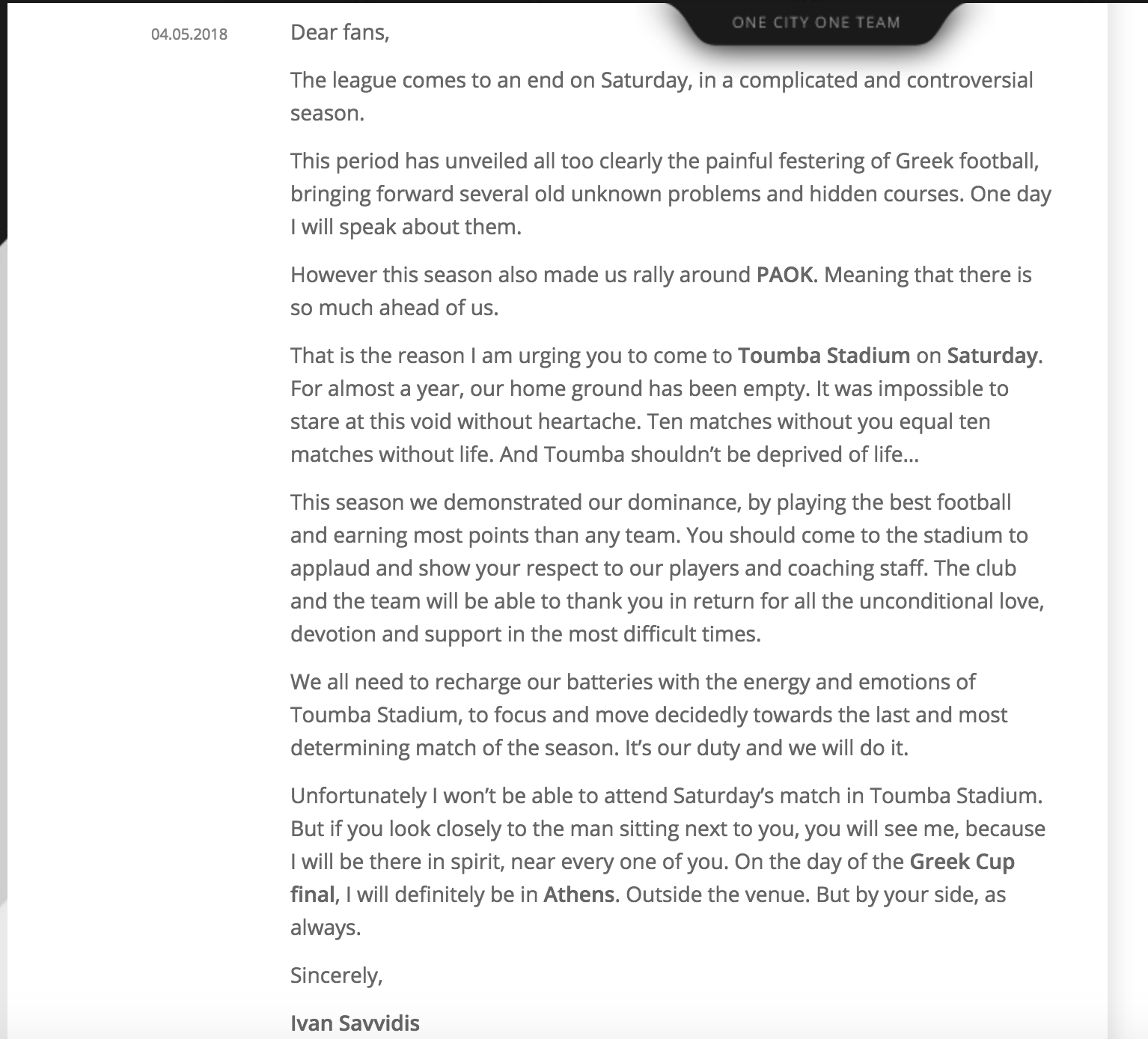 It is a statement full of pathos lacking any form of self-criticism. Furthermore, most PAOK fans are in full support of the oligarch. After all, Savvidis has saved the club and turned them into a title contender. The punishments and point deduction in their eyes are all down to the actions of the central authorities in Athens.

It is with that background that the Futbolgrad Network is heading to the final game against last-placed Platanias. “Are you ready to drink shit wine and beer”, one member of a PAOK ultra group asks the Futbolgrad Network. He was not joking. Retsina, in particular, the popular brand Malamatina, we are being told that Malamatina in Italian means “bad morning”, which seems fitting, and beer was not only consumed outside the stadium but also smuggled in great quantity inside the Toumba Stadium. 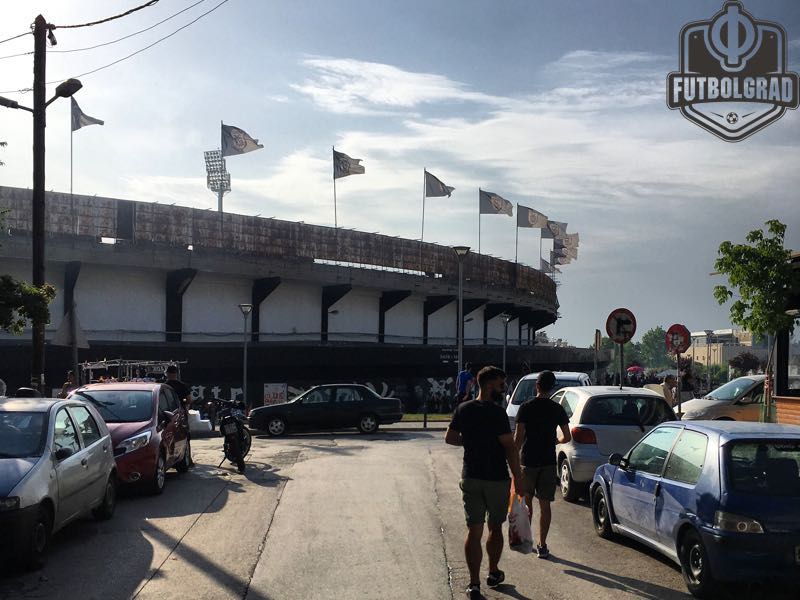 Alcohol was not the only thing smuggled in either. Asked about game day tickets the Futbolgrad Network is repeatedly told not to worry about it. When we got to the gate we quickly find out why. Fans double to get through the rotating gates and when I move through it I am briefly held back thinking that I got busted. But then the security guard just yells at me to go through once at a time as the gates are set to green letting everyone in.

No security meant that literally everything could be brought in. Not that it would matter anyhow as the fans of Gate 4, the entrance to PAOK’s most volatile fans, very much control the fan sector anyhow. But we are being told that it is unlikely that there will be trouble.

“We want to go to the cup final against AEK and any trouble would mean that we wouldn’t be allowed to play”, another ultra tells Futbolgrad. As a result, the ultras chose to go without the usual choreography involving flares and banners that have made the PAOK fans one of the most colourful to watch in European football. Instead, the fans kept it to simple chanting at the beginning of the match.

That, however, did not mean that the atmosphere was not great. Coached by Mircea Lucescu’s son Răzvan, PAOK fired on all cylinders right from the start, laying siege to Platanias’s box and scored twice in the first 15 minutes, to secure the three-pointer. The scoring was opened when Léo Matos went after a loose ball in the 9th minute and his header turned to assist for Dimitris Pelkas, who fired a perfect volley for the opener. Six minutes later, it was Aleksandar Prijović’s turn to score, also on an assist by Matos.

The Brazilian full-back set up the Serbian forward for the simplest of finishes, to put the match past the visitors. From there PAOK more or less circled the ball using their technical and tactical dominance over the last place team in the Greek SuperLeague. There never seemed to be a doubt over the result in the first place, and as a result, even the goals only raised the level of the noise generated by the fans by a fraction.

Instead, it almost appeared that the PAOK fans were mostly there to celebrate themselves and the season that despite the best performance on the pitch throughout a season by a PAOK side since 1985 would not end in a title celebration. Not that it muted the party in any way. Joints and alcohol were passed around freely and as the sun backed the stands the smell of both would quickly mix with fireworks being lit during the second half.

Not that it was the most spectacular, or threatening atmosphere. Even with the flares going off the songs and chanting seemed positive as it was all in the spirit of keeping the club out of further trouble – at least by Greek standards. 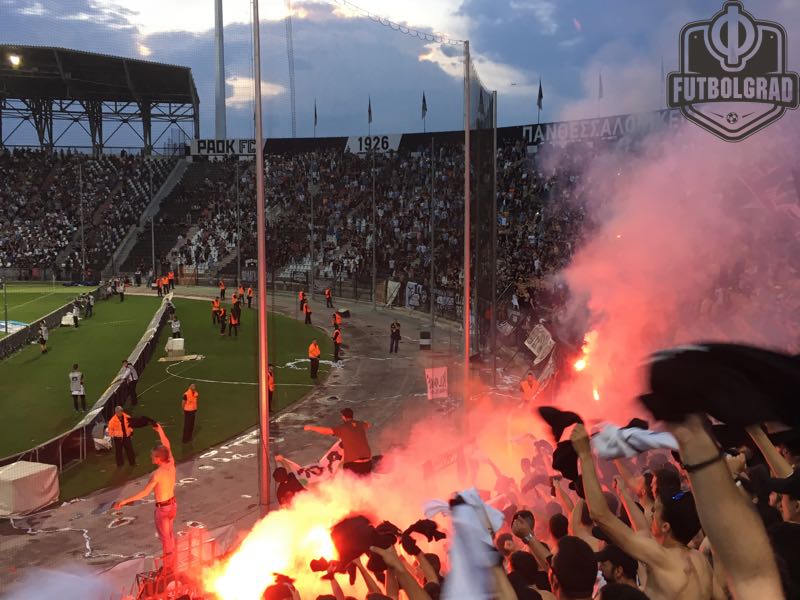 Hence, it was almost a party for the fans instead of the game that was taking place on the field. Perhaps there is a good reason for that. PAOK are a good side, perhaps on the same level as a lower mid-table team in Germany, but their opponent was poor and did little to contribute to the game. PAOK, in the meantime, relied heavily on the individual talents of players like Vierinha, Prijović, Léo Matos, and Fernando Varela.

Two of those stars would then combine in the 75th minute to score PAOK’s third. Vieirinha launched a pinpoint cross and Prijović netted his 19th goal of the league with a header. With the goal, Prijović further built on his goalscoring lead capping off an impressive season for the Serbian striker.

That goal not only sealed the deal but also led to further flares being lit and fans climbing the fences to celebrate with their club. After the game, the pitch was invaded as PAOK fans would celebrate a season in which their team had won the most points of any club on the field.

Unfortunately, for the Eagles Greek football has been overshadowed by politics and corruption involving very much there owner. Hence, while Savvidis is celebrated as a hero he will also have to carry the burden that in the end he may have cost PAOK a chance to win the club’s first championship since 1985.