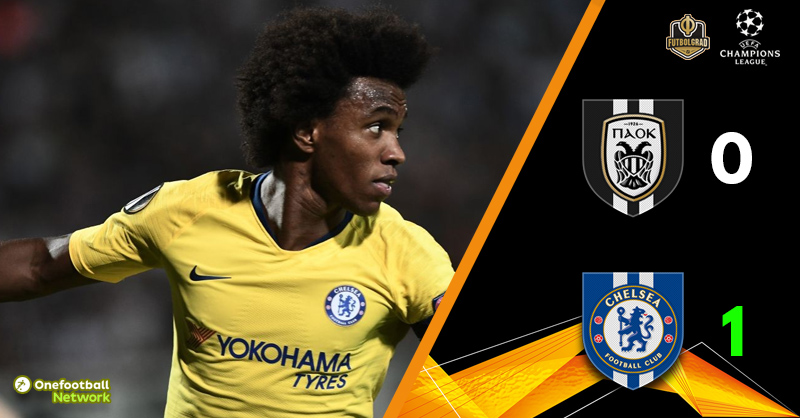 Despite narrow victory, Chelsea dominate PAOK in the derby of the oligarchs

PAOK v Chelsea is so much more than a football match. Keeping in mind the backdrop of Greek football politics and also the Russian ownership of both clubs meant that this was much more than just a game played by 22-man on the pitch.

As always the PAOK support was intimidating. Smoke bombs went off, and fireworks went off as the famous fans of Gate 4 greeted Chelsea with an electric atmosphere at the Stadio Toumba.

On the pitch, it was, however, all Chelsea. In the seventh minute, Ross Barkley drove the ball through midfield spotted Willian’s run and the pass found the Brazilian whose shot slipped under the arms of Alexandros Paschalakis to give Chelsea the lead. Alvaro Morata (10′ and 18′) had further chances to extend Chelsea’s lead.

PAOK’s fans, however, were almost unfaced as the chanting continued, the songs not even stopping for a moment, after Willian had scored the lead. It is typical fashion for PAOK supporters to continue chanting, almost by scripture no matter what the score is on the field.

That unwavering support did not seem to face Chelsea, who used their full routine to play down Maurizio Sarri’s pragmatic attacking football. Morata, in particular, should have scored several goals in the opening half but the Spaniard either failed to convert his opportunities or even came a step too late to reach a crucial ball played through to him.

As a result, PAOK was able to keep the match tight until halftime with Chelsea carrying a narrow 1-0 lead into the tea-break.

Within moments of kickoff, Chelsea produced another chance. Willian, Pedro and Morata combined well at the edge of the box and eventually, Pedro would unleash a shot from the far corner of the penalty box but the shot was too centred, and Paschalakis had no problem handling the ball.

Chelsea produced chance after chance. Willian (56′) should have scored his second when he hit a volley from 14-yards out, Marcos Alonso slalomed past Vierinha in the 61′ but his shot was deflected past the goal, and Pedro sliced open PAOK’s defence in the 72′ minute only to see his shot saved by goalkeeper Paschalakis.

Ten minutes left and miraculously PAOK were still in it. Not surprisingly the Greeks now started to press looking for that goal that would produce an unlikely point against the English giants. But PAOK could not come up with a moment of brilliance that would have upset the apple-cart giving Chelsea an easy, yet narrow, victory.

Brazilian Willian scored the winner. It was his second goal in the last two games. The Brazilian also scored against Cardiff City on the weekend after coming off the bench. Willian had a problematic relationship with former head coach Antonio Conte but seems to have rediscovered his form under current head coach Sarri. 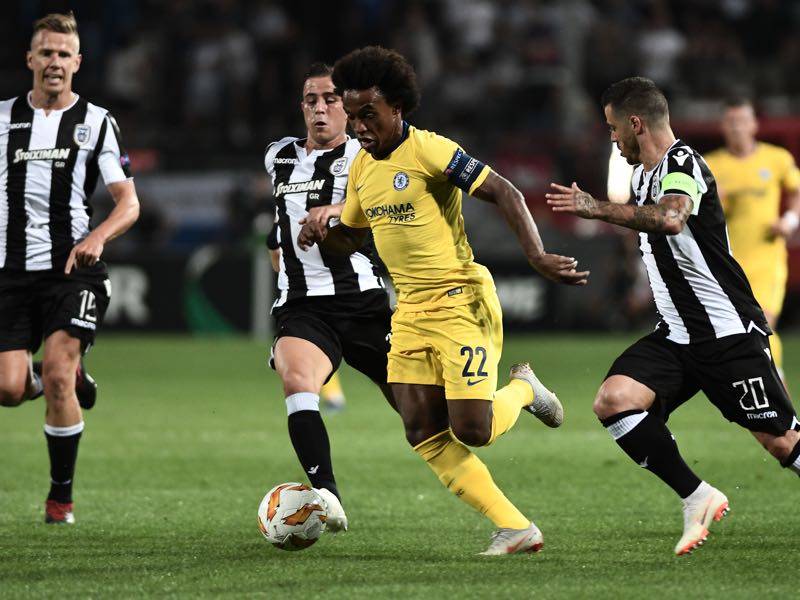 Ivan Savvidis against Roman Abramovich, PAOK supporters outspoken over the Macedonia issue and the backdrop of Greek football politics. Russian oligarchs own both clubs but, of course, Savvidis was not able to attend tonight’s game because of his three-year ban after he entered a match with a gun holstered to his belt during a game last season. Hence, the background to this match, in theory, could have provided from some intriguing storylines. But Chelsea head coach Sarri had none of that. His side was utterly unimpressed by all the side-noise or the noise generated by PAOK supporters and capped off a clinical performance with a pedestrian 1-0 victory.