They were playing at home, but they were not home. Back in Agdam nobody was cheering, as their football team clinched their second Azerbaijani league championship title by beating Inter Baku 4-1 thanks to a hat-trick by Brazilian striker Reynaldo. Twenty-one years had passed since Qarabag Agdam’s previous league title. And twenty-one years have passed since the team were able to see their own hometown and play in front of their own crowd at the İmarət Stadium. As Qarabag Agdam proceeded to a historic league and cup double in 1993, Armenian forces entered the city. During the battle the İmarət Stadium was bombed to the ground and a city of forty thousand was turned into a pile of rubble and memories. Now in Agdam, İmarət represents the name of a graveyard. And Qarabag are an internally displaced football team; their hometown now desert, derelict, decaying.

In recent years Qarabag Agdam have grown out of financial crisis to win their third cup title, becoming a regular fixture in the Europa League. In their last four appearances in the competition, they were never eliminated before the third qualification round, where only the might of Twente Enschede, Borussia Dortmund, Cercle Brugge and Eintracht Frankfurt could end their path. Most of the credit must be given to their coach Qurban Qurbanov, who took the helm in 2008, only two years after retiring as a player. Meanwhile, Qarabag Agdam’s financial backing has been ensured since 2001 by Azersun Holding, a governmental corporation in the food and farming sector. Azersun, headed by its president Abdolbari Goozal,  is deeply involved in aid projects for Nagorno-Karabakh refugees and regards the sponsorship of Agdam as “another dimension of the company’s corporate social strategy”, according to their website. This year Agdam were able to claim the Azerbaijani league title, managing two eleven-match unbeaten runs and clinging to first place ever since the 20th matchday of a total of 36. Their home games took place at the Tofiq Bəhramov stadium in Baku, a complex named after Azerbaijan’s most celebrated referee, lying around 250 kilometres from Agdam.

War in the Nagorno-Karabakh region, where ethnic Azerbaijanis and Armenians had lived shoulder to shoulder for decades, sparked off in 1988 as the Soviet Union approached its collapse. Although a ceasefire was negotiated in 1994, tension has rarely waned as the breakaway republic of Nagorno-Karabakh operates as an Armenian de facto independent enclave in de jure Azerbaijani territory – around thirty people, including civilians, die every year due to sniper fire. 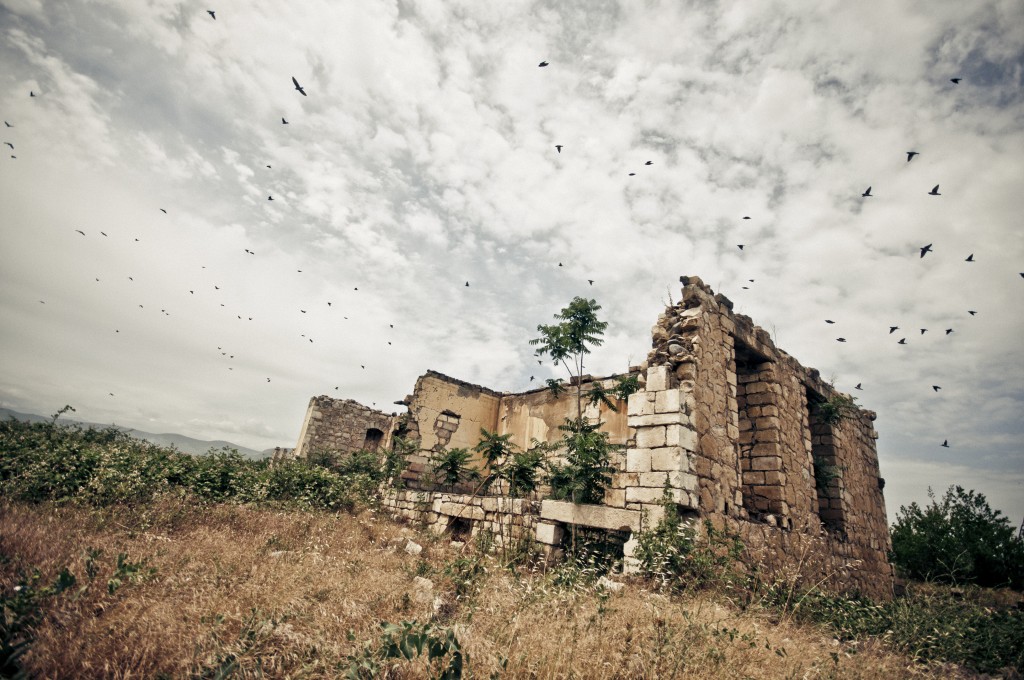 As the breakaway republic still struggles to build a football scene, the first attempt to stage a football league was announced in 2009 while its national team made their debut in 2012, with a 1-1 draw against the national team of Abkhazia, another breakaway republic whose own football league has been running independently since 1994. A home debut followed one month later in Stepanakert, where they beat the Abkhazians 3-0. After their debut former coach Sargis Aġaǰanyan told the Asbarez website: “This is one of the major steps in our post-war reality. This is our only chance to enter the international arena and stand under our national flag with our national anthem. This is already a different feeling”. The potential of recognition through football is also understood by the government of the republic, as the squad receives approximately 70 million drams (around 135 thousand euros) of state funding a year.

Next month the Karabakhi team will be playing its first major tournament in Östersund (Sweden) as they take part to the first ConIFA World Championship along with Abkhazia, South Ossetia and other non-FIFA representative teams. Letters of protest were sent by the Azeribaijani FA to the Swedish FA and FIFA in an attempt to prevent Nagorno-Karabakh from taking part in the competition, even though the event is not sanctioned by FIFA. The organising confederation ConIFA replied that “without judging on the political situation or the dependence or independence of Nagorno-Karabakh”, they would insist on inviting Nagorno-Karabakh as their aim was to give “unrepresented regions, people, minorities, nations and isolated territories the chance to represent them through football”. Due to its unrecognised status (the country is only recognised by three other breakaway republics: Abkhazia, South Ossetia and Transnistria), football in Nagorno-Karabakh lives in almost complete isolation and its clubs and players have no other opportunity to play international football. For years the only outlet for Karabakhi football was Leṙnayin Ġarabaġ, an Armenian ethnic team from the region which took part in the Armenian league from 1995 to 2006, staging its home games in Yerevan and retiring from the league in 2007, after gaining promotion to the first division.

Qarabag Agdam played the first leg of the 1993 Azerbaijan Cup semi-final against Turan Tovuz at the İmarət Stadium on May 12th, 1993. Eight thousand people witnessed a 1-0 win as Yaşar Hüseynov slotted home the only goal of the day. It would be the last ever football match to be staged in the city of Agdam. Qarabag won the return leg 2-1 and then proceeded to win the final in Baku on May 28th, courtesy of a lone extra-time goal by club legend Müşfiq Hüseynov. Two weeks later the Armenian forces stormed the city with artillery fire, tanks and Grad missiles. The battle of Agdam lasted one month and a half and took its toll with almost six thousand Azerbaijani casualties. Agdam fell on July 23rd, only five days after Qarabag had won its championship play-off semi-final against Turan in extra-time, again with a goal by Yaşar Hüseynov. The players were informed about this only two days before the league final, played on August 1st. Xəzər Sumqayıt were the next to be beaten 1-0, again thanks to a goal by Yaşar Hüseynov. However, this was not an occasion to celebrate: after the final most players went back to Agdam in search of their families and friends.

With Agdam suffering more than most cities during the Nagorno-Karabakh War, Qarabag Agdam stood by their town until the moment it fell. In February 1992, after the Khojaly massacre, one of the deadliest and most controversial events of the whole conflict, some of the players approached the city commander, asking to join the front and defend Agdam. The commander refused, stating that their job was to keep playing football, in order to allow people to think about something other than war. Up until May 12th they kept on playing, only calling off matches when missiles were regarded as being too close to the İmarət Stadium.

As Qarabağ beat Inter Baku to claim its second title, striker Vügar Nadirov took the pitch with a couple minutes remaining. Nadirov was born in 1987 in Agdam: his father Ərşad died in battle when he was only a small child. Ərşad’s brother – Vügar’s uncle – is Adil Nadirov, former Qarabag coach. Adil’s dream, he told the Azeri sports magazine Qol.az, is to see Agdam once more: “By the grace of Allah, I’ll be back to visit my brother Ərşad’s grave”.

Displacement is one of many tragic aspects that resulted from the Nagorno-Karabakh War for both sides, as estimates count around 600-650 thousand IDPs (Internally Displaced People) with 200 000 refugees in Azerbaijan, 350-400 thousand refugees in Armenia and 15 000 IDPs in the breakaway republic. According to statistics from 2008, one in eight Azerbaijanis is either an IDP or a refugee from the war; a similar ratio can be inferred by juxtaposing the number of Armenian war refugees to the whole population of Armenia. Because of their history of displacement and exile and being the only Karabakhi team playing in the Premyer Liqası, Qarabag have become a symbol for war refugees, not only drawing support from those hailing from the Agdam region, but from the whole population of 800 000 Azerbaijani refugees and IDPs from Nagorno-Karabakh. Interestingly, Qarabag are not the only team who draws support from a displaced population in the Caucasus: Spartaki Tskhinvali, who play in Georgia’s the Umaglesi Liga, hold similar emotional resonance for those who were uprooted from wars which took place in South Ossetia in the early 1990s and in 2008.

The team had suffered its losses during the war: former coach and player Allahverdi Bağırov went on to become a respected army commander, saving many people during the Khojaly Massacre. War reporter Emin Eminbeyli recalled: “Extraordinary events took place as prisoners were exchanged. […] Allahverdi Bağırov embraced one of the Armenian prisoners and, looking straight to the camera, said that that man, for many years, had been a team-mate of his. At the moment of the exchange, the Armenian soldier told Allahverdi he hoped never to be on opposite fronts with him again”. Bağırov’s life would be taken by an anti-tank mine on June 12th, 1992. He would become a national hero, but he had also gained his enemies’ respect, as Eminbeyli recalls. Upon learning about the death of Bağırov, the Armenian commander Vitalik contacted Azerbaijani soldiers on the radio, asking them to confirm the news and cursing them: “How could you not save such a man?”

Damiano Benzoni is an Italian sports journalist from Como, focusing on the interactions between sports and politics, on non-FIFA football and on any sport story taking place in an unfamiliar place. He lived for six months in Bucharest, writing a thesis on the democratisation of Romania and witnessing the first goal in the National Arena (Mutu versus Belarus). Fascinated by Dinamo sport teams, Damiano writes in a blog called Dinamo Babel.