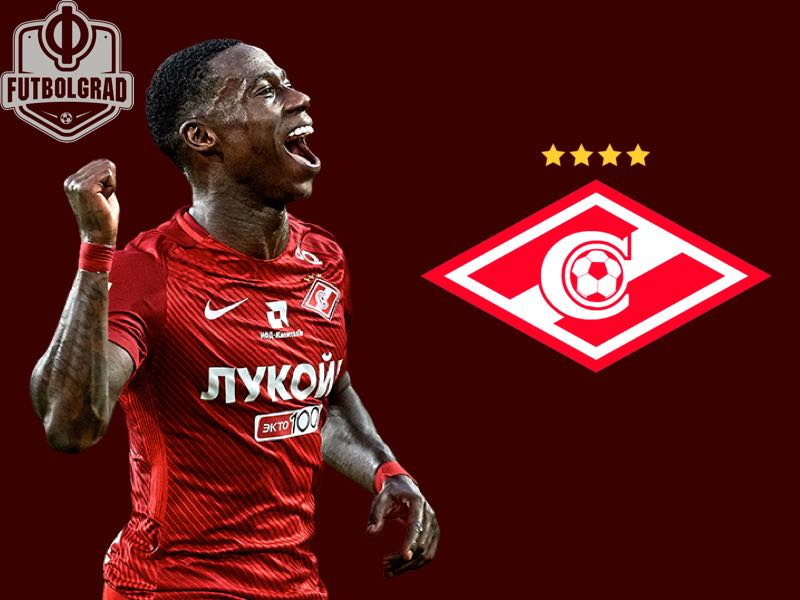 Quincy Promes – What is Next for the Spartak Star?

Russia’s player of the year is Dutch. Already on December 27, 2017, Quincy Promes was voted Russia’s footballer of the year. The magazine Futbol placed the Dutch Spartak winger ahead of teammate Denis Glushakov and Krasnodar forward Fedor Smolov.

Organized by the magazine Futbol i Khokkey the award is the oldest of its kind in Russia and previously the Soviet Union and has been awarded by the magazine since 1964. Promes is the 44th winner of the award and only the sixth legionnaire (as foreign players are called in Russia) to be recognised the best player of the year in Russia. Promes is also the first Spartak player since Yegor Titov, in 2000, to win the award.

The award caps of a fantastic year for the Dutch winger, who after an excellent 2016-17 season with Spartak where his 12 goals and ten assists in 26 Russian Football Premier League games contributed significantly to his club’s first Russian championship in 16 years. This season Spartak had a slow start to the season and head coach Massimo Carrera even had to worry about his position for some time.

While Spartak were inconsistent at times Quincy Promes, however, did his part of stabilising the situation before the winter break. With ten goals and six assists, Promes is once again among the top scorers in the RFPL. Playing off a natural striker on the left-wing Promes’ goal-scoring rate in the Russian top flight is remarkable.

Scoring a goal pretty much every second game Quincy Promes has managed 53 goals in 101 RFPL games. Adding assists to the equation Promes managed 84 scorer points since joining Spartak Moscow from Twente Enschede in 2014. Given that Promes never plays as a striker and that Russian football is notorious for low scoring games Promes’ numbers have made him the best player in the Russian top flight and one of the hottest prospects currently not playing in one of Europe’s top leagues.

It is for that reason that Promes becomes a hot topic every transfer window. Last winter Liverpool were strongly linked with the winger. But Spartak Moscow owner Leonid Fedun put a hefty price tag on Quincy Promes as he saw him a crucial part of Spartak’s title run. The gamble worked out in the end—Quincy Promes scored several crucial goals and guided Spartak to the championship.

Then in the summer, Promes was among the candidates listed to replace the likes of Frank Ribéry and Arjen Robben at Bayern. But Bayern were not alone in being named among the candidates that were apparently looking at the player. Whether such rumours were true is also a question in itself.

Under a contract, until 2021 Promes signed a new contract in the summer of 2016, which, rumour has it, richly awards him with more than €5 million a season—more or less tax-free thanks to the Russian taxation system that categorises footballers as artists. Earning riches at Spartak Promes therefore quickly announced last summer, motivated by another coffer of money, that he will remain at Spartak for at least another year to play Champions League football.

Riches and rewards regarding Russian football are therefore guaranteed for Promes. But what about the motivation to play for a top club in one of Europe’s top leagues? When the Netherlands failed to qualify for the World Cup in Russia, it was quickly pointed out that the country lacked real world class stars. Only the above-mentioned 33-year-old Robben represented superstardom. The rest? Replaceable!

Will Quincy Promes ever go Abroad?

Promes was, therefore, part of the criticism of football experts that dissected the many issues of Dutch football. Quincy Promes, so they believe, has world-class potential, but he is not challenged enough while playing against clubs like Anzhi, Khabarovsk and Tosno in the RFPL. Instead, he should leave Russia and head west to finally make the step that could help him lead the Netherlands out of football misery.

Hence, as the winter transfer window is once again open the question on Quincy Promes’ future will once again become a hot topic. Rumours of interests from the English Premier League—Everton are among the clubs keeping an eye on him if one can believe high flying twitter journalists.

There is no doubt Promes would strengthen any club in any top league that signs him. It would be interesting to see him play in one of Europe’s top leagues, for one of the big clubs, and show of his skills playing alongside, and against, top stars week in and week out.

Whether this will happen remains to be seen, because despite failed attempts of learning Russian Promes is in some way already entirely among Russia’s most significant football talent. Like native Russians, he seems to display a lack of motivation somewhat to make a move away from the RFPL. While this is fantastic for Russian football, it might not be the best for the long-term development of Promes’ football.