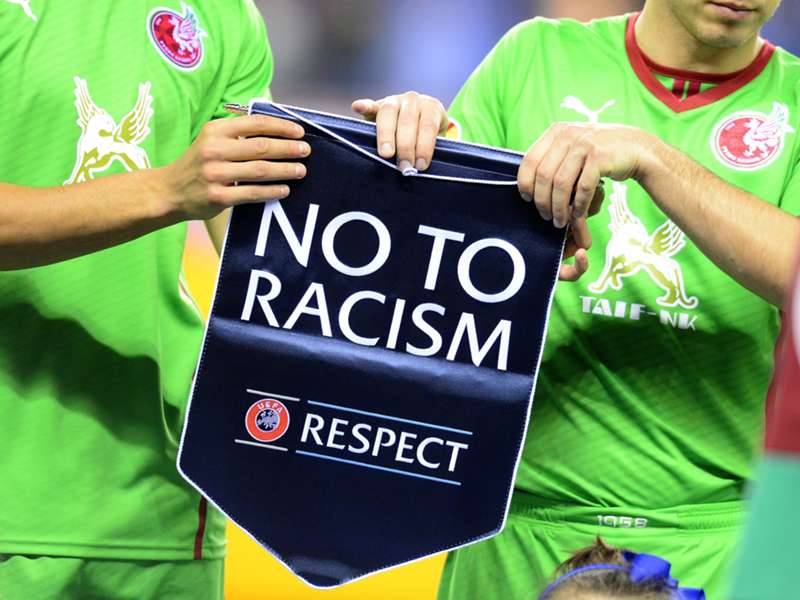 For anyone who hasn’t heard BBC World Football’s recent podcast item on racism in Russian football, I’ll start with quick summary. Former Russian national team captain and World Cup 2018 ambassador, Aleksey Smertin, claims that there is “no racism in Russia”, that it is all just “rumours”. He quickly seems to sense that he has made an unwise statement and tries to row back—but only makes things worse. There are insulting chants in stadiums, he admits, but it’s all good-natured banter—such as fans giving bananas to black guys, which was “just for fun”. A little deeper entrenched in the hole he’s dug, he then says that he’s “probably wrong”.

Later in the program former Lokomotiv Moscow defender Andre Bikey, who played in Russia from 2005 to 2007, disagrees. He tells the BBC that “racism is everywhere—it happened to me and to my teammate,” though he had no problems at his two clubs Shinnik Yaroslavl and Lokomotiv Moscow. He partly agrees with Smertin, in that he thinks things might have improved since his time in Russia. 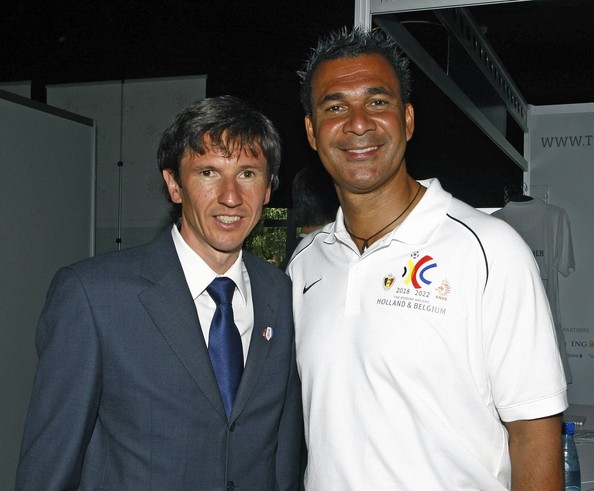 Smertin “there is no racism in Russian football…”

For even the casual follower of Russian football, this material covers no new ground: the Russian official denies that there is a racism problem and the former player says that he has experienced it frequently. It’s a pity that the BBC didn’t delve any deeper, as there is far more ground to cover. For one thing, in the summer of 2015 Smertin was involved in the launch of the Play Against Racism project, which is supported by the Russian Football Union, FARE and Lukoil. It would have been interesting to know from Smertin, if he indeed believes there is no racism in Russian football, why he got involved with Play Against Racism.

Bikey’s first-hand account is powerful, but it is unfortunate that the BBC didn’t report on the experiences of a player currently or even recently in the country, for example Spartak Moscow’s outstanding young Dutch talent Quincy Promes. He was recently an ambassador at a Russian children’s tournament held under the Play Against Racism banner, and commented: “I’ve played in almost all the stadiums in the country and haven’t experienced such unpleasant incidents [racism]. But it’s important to show children from a young age that racism is unacceptable.” When asked for a third time by the Russian website championat.com about racism in stadiums, Promes acknowledges that he has occasionally heard “shouting or stupid comments from the stands” which he ignores. 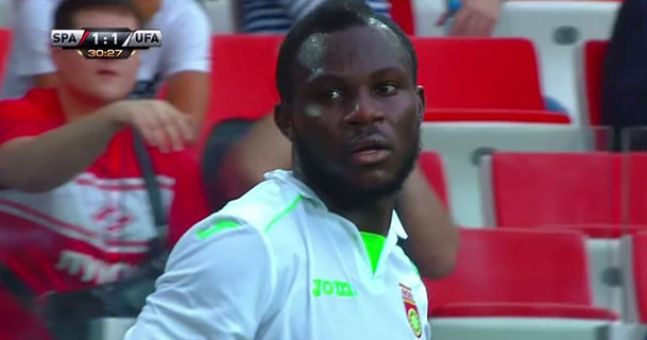 Frimpong during the match against Spartak

One of the most disappointing points of the interview is when Bikey is asked whether having the World Cup in Russia will “change the people’s mentality there”—the assumption is that everybody in Russia is a racist. Again, a little extra investigation would have revealed more diverse viewpoints and positive trends that are developing—illustrated in the reactions to the racial abuse Emmanuel Frimpong suffered at the start of this season. Through his Twitter feed, Frimpong said that not all Russian fans are racists, and the comments of Russian fans who responded to the Frimpong incident on championat.com back this up:

The Premier League needs to install cameras in the Spartak fan sector and close this racist stadium and its fans! We don’t want them to take the 2018 World Cup away. Scumbags!

-3 points for Spartak and a two-match stadium ban. We’ve got to fight racists.

The stadium needs to be banned from holding matches until at least the half-way point in the season. It’s time to combat the racists properly – it’s a real embarrassment to have a racist scandal with the season barely underway.

The BBC might have also have contacted the fan movement CSKA Fans Against Racism, whose objective is to mend their club’s image after the problems in last season’s Champions League fixtures. “We do have problems with our fans,” a representative told russianfootballnews.com, “but they will never represent the absolute majority of CSKA supporters who strongly oppose any racist or fascist ideas.” The club’s management backs the movement whose messages on social media seem to be in part responsible for the swift reduction in the number of racist incidents at CSKA games. 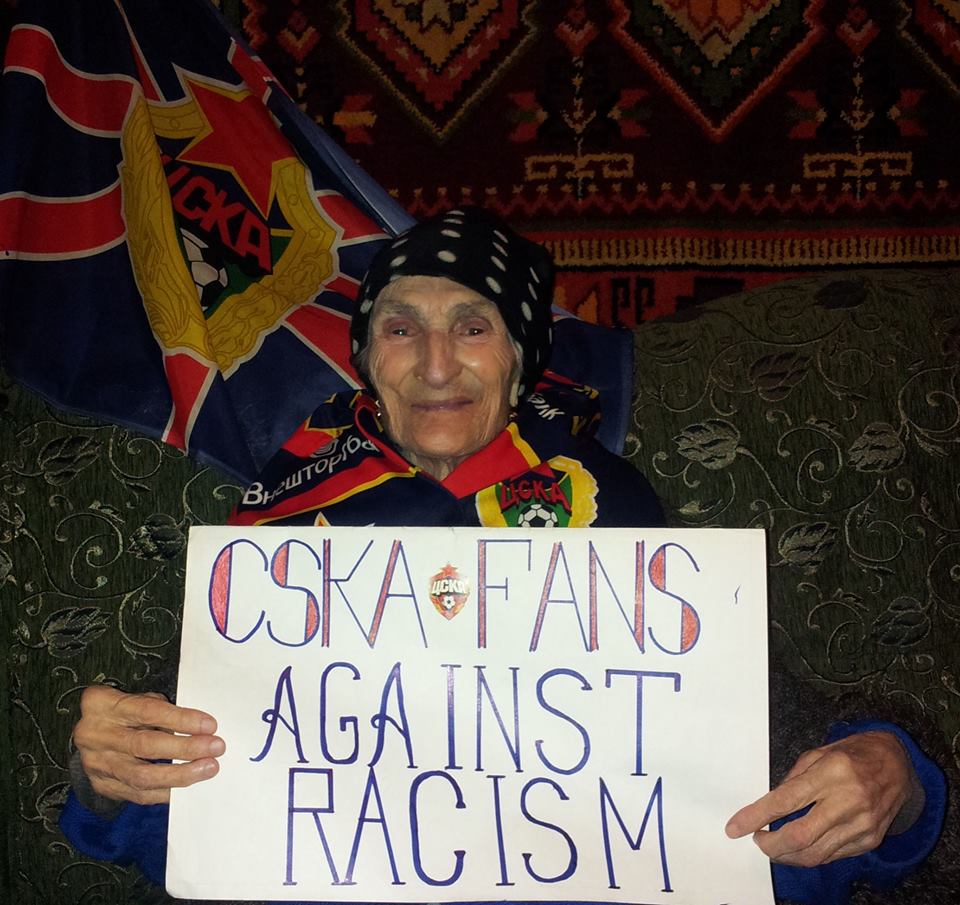 The initiative #CSKAFansAgainstRacism has been well received by most CSKA fans. Image via russianfootballnews.com

When fans on both sides traded offensive insults at a match against Anzhi Makhachkala this season, CSKA Fans Against Racism was quick to react with a statement: “If the Russian Football Union doesn’t implement an immediate plan to combat the atmosphere of anarchy and total hatred at the stadiums, our football will have to face all disastrous consequences. We realise we are hated by many people for raising these painful issues publicly, but we have no doubt that we’re on the right side of history.”

The BBC’s report is important in that it highlights an apparently commonly held perception in Russia that what might be considered racism elsewhere is just idiocy or tomfoolery. Roberto Carlos twice had a banana thrust at him when playing for Anzhi—video footage of his and his teammates’ reaction when this happened against Krylia Sovetov indicate that they did not find it funny. Influential people like Smertin need to recognize that such actions show ignorance and are offensive.

The report also missed a huge opportunity to identify those in Russia who are speaking out against racism. Wider coverage of these people could help encourage a silent majority to be more vocal. Unfortunately there seems to be little interest in painting Russia in a positive light, as CSKA Against Racism when they tried to get the attention of Western media. Talking to Russian Football News a CSKA against racism spokes person pointed out: “When a small group of CSKA fans is involved in an ugly issue they immediately report it, but when thousands join an anti-racist initiative nobody is interested in it … it seems that as long as bad news is coming from Russia everything is fine for Western journalists.”