European tours were customary for the Brazilian giants Santos between 1957 and 1974, which is the club’s most successful period. The Golden Era or Os Santásticos, as it is commonly called today, made the Brazilian club a global brand and one of the most recognizable teams in the world. The legendary Pelé made his debut with the club in 1957. The club had won the Campeonato Paulista in 1955 and 1956, but despite the fact that Pelé scored 58 goals in his first season, Santos did not defend the title in 1957. Pelé’s second season was a complete triumph, however, with Santos regaining the Campeonato Paulista and with Brazil winning their first World Cup in Sweden.

During the next ten years, Santos with Pelé won several titles, and become a major worldwide football brand. In 1969 Santos, as the current Campeonato Paulista champion once again and with Pelé as the top scorer of the tournament with 26 goals, visited Yugoslavia as part of a global tour. In Yugoslavia four games were arranged—against Željezničar (from Sarajevo), Dinamo Zagreb, and Red Star and Partizan (both from Belgrade). 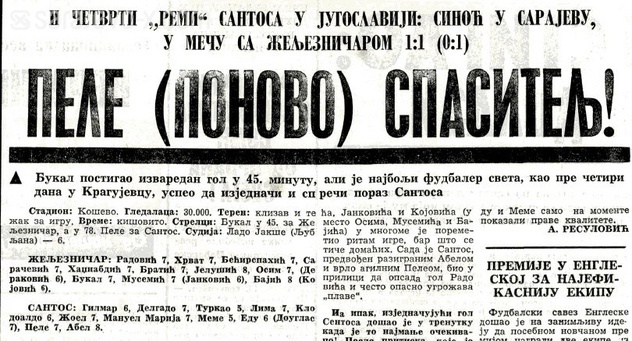 News from Sarajevo where Pelé’s Santos also played a friendly

With Santos’ team already in Belgrade at the beginning of September, the best player in the world (Edson Arantes do Nascimento simply known as Pelé) and his teammates, seven of whom were also members of the Brazilian national team at the time (goalkeeper Gylmar dos Santos Neves, Carlos Alberto Tores, Joel Camargo, Clodoaldo Tavares de Santana, Djalma Dias, Rildo da Costa Menezes, and Edu), decided to watch their upcoming opponents Partizan in action against Radnički on September 7, 1969.

This decision proved to be providential as the newly promoted Red Devils, as Radnički are referred to today, changed the travel arrangements of the Brazilians.

Radnički had been formed in 1923, and gained its promotion to Prva savezna liga Jugoslavije (Yugoslav First League) after defeating Sutjeska and Crvenka in the play-offs. A truly legendary football story written by a working-class club (the name Radnički means workers) began in 1969, the year that the club was promoted.

The league debutants put in an impressive display against Partizan, one of the most famous Serbian clubs, and comprehensively won the game at the Yugoslav National Army Stadium 4-1, a victory that even today is considered one of the greatest wins in the club’s history. Impressed by what he had seen, Pelé himself demanded that Santos play against Radnički instead of Partizan. “Who are they? Radnički? Where is Kragujevac?” Santos’ players reportedly asked after watching the league debutants defeat and embarrass the great Partizan.

Santos’ officials subsequently decided that the club would play in Kragujevac the home of Radnički, instead of playing a second game in Belgrade against Partizan. It is unclear how the agreement was made; it is said that Pelé’s word was enough to persuade the Yugoslav communist regime and Brazil’s dictatorship to make a swift change of plans.

Myth in the making

Santos’ Yugoslav tour begun three days later, when on September 10th they played against the reigning champions Red Star. Belgrade’s famous Marakana Stadium (fittingly named after Rio de Janeiro’s Maracanã Stadium) was crowded with 67,128 visitors, an attendance which was  a record for a Belgrade game at the time. The game ended 3-3. Santos were the better team in the first half, and gained a 3-1 lead at halftime. Red Star came back to life in the second period and missed a couple of chances to grab a win in the final stages of game. Pelé scored one for the Brazilian side and Edu two, while Vojin Lazarević put all three goals next to his name. Next on the schedule was a visit to Zagreb where Dinamo and Santos played a 1-1 draw in front of 60,000 people at Zagreb’s Stadion Maksimir.

It was September 15th when the Brazilian giants arrived in Kragujevac, at the time a small city of 80,000 people. Kragujevac lived for its club, and Radnički had an average attendance of 30,000, nearly half of the population.

The game was played at Čika Dača stadium, home to Radnički Kragujevac. Named after Danilo Stojanović, known as Čika Dača (Uncle Dača), a football pioneer in Serbia, the stadium was completed and opened in 1957. Radnički’s game against Santos with 40,000 spectators is still the largest attendance ever recorded in the history of the club.

With Santos in town, not even the heavy rain that poured that day could ruin the game that was aired on national television. The word is that Pelé made a deal with the Kragujevac side to end the game in a fair and sportsmanlike manner with a 3-3 final score. People from Kragujevac, however, had a different ending in mind, as they always do. Radnički wanted to beat the great Brazilians. 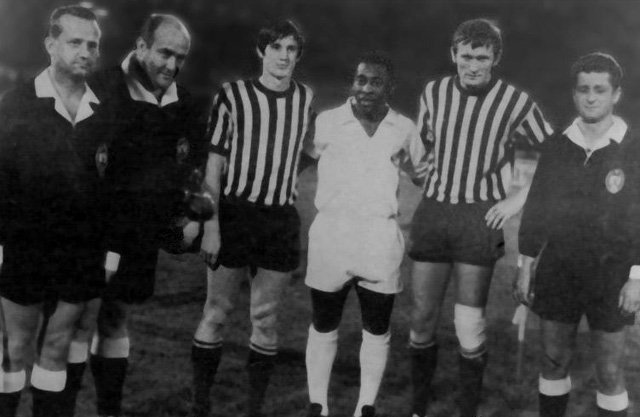 Edu scored early in the game, V. Nikolić equalized, then Edu scored two more to give Brazilians a comfortable cushion. Paunović made it 2-3, and Paunovski later brought the game to the (reportedly previously arranged) 3-3. With a minute left in the game at Čika Dača stadium, Paunovski scored his second in the game to give Radnički a lead 4-3 with the Kragujevac crowd going wild. At that moment an urban legend was born.

Pelé took the ball from the centre and with his football samba he danced through the opposition and scored a fantastic late equalizer, thereby saving the Brazilian champions from a sure defeat. The draw with Santos remains one of the most glorious moments in the history of both the club and the city of Kragujevac.

Memory of the day when brave Radnički stood up against football’s greatest is a proud one for the club which is currently struggling to survive tough financial times. Relegated to the Prva liga Srbije (Serbian First League), Radnički is sitting at the bottom of the second tier of Serbian football with no points after six rounds. The fans are hopeful of a future that brings back the old days when Radnički was force to be reckoned with—days when even beating the best of the best was possible.

Loading...
Newer Post
From Yellow-Green to Yellow-Blue – The Naturalization of Shakhtar’s Taison
Older Post
Discussion – The Pros and Cons of the 6+5 Rule in the Russian Premier League