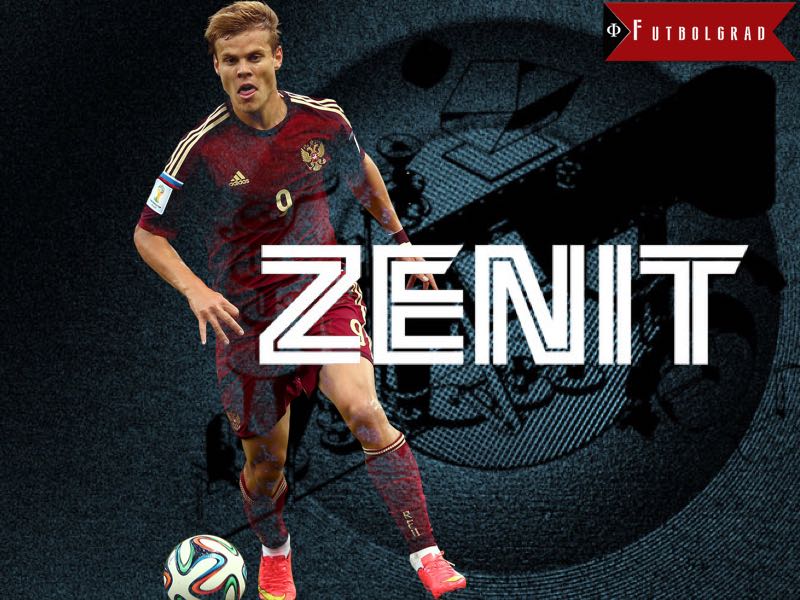 The resurrection of Aleksandr Kokorin

Aleksandr Kokorin continues to resurrect his career under Zenit Saint Petersburg’s new head coach Mircea Lucescu. On the weekend, Kokorin scored the game winner in Zenit’s 1-0 winner over Tom Tomsk in what was his second goal in the Russian Football Premier League this season.

This striker rate, on its own, is not exactly impressive for a player, who was once deemed the most exciting forward prospect of his country. But, when one includes the facts that Kokorin has already scored three goals in the UEFA Europa League, that the Russian Football Premier League is generally a low scoring affair, and that Lucescu has converted Kokorin to a winger, one can see why the Russian media has applauded Kokorin’s play of recent weeks.

In many ways, the revival of the forward turned winger could not have come at a better time. At now 25-years-of-age, Kokorin is at a stage in his career when a player either becomes a talent who never quite managed to live up to his early promise, or an established leader for both club and country.

In the last two years, Aleksandr Kokorin’s career drifted dangerously close to the former category. In July 2014, his transfer value was listed at €18 million, but, two years later, dropped to €5 million.

The low point was reached last season, when Kokorin struggled at Dinamo Moscow. The club had gone into the season with massive financial problems, and the management was determined to build a new squad on shoestring. While many players left the club, Kokorin remained, and found it increasingly difficult to shoulder the responsibility of being the club’s most talented player.

It was, therefore, no surprise that there were consistent rumours about Kokorin leaving the club. Kokorin’s name still drew a lot of interest, as clubs from England, including Arsenal, but also Zenit, were interested in signing him.

In Russia, many fans, and pundits, hoped that Kokorin would leave the country. The argument was that he would only develop into a top player if he left the comforts of Mother Russia. But, as it is often the case with Russian players, Kokorin preferred staying in Russia.

There are plenty of reasons why Russian players do not want to leave to play abroad. Some of the arguments include that players get homesick, and therefore cannot perform when away from home. The major reason, however, is money.

Russian football players pay very few taxes in Russia and, when Zenit, fuelled by Gazprom’s billions, made an offer to sign Kokorin at the end of January 2016, there was no doubt that Kokorin would move to Saint Petersburg. For Zenit, the move made sense, as the stifling rules that limit the number of foreigners a team can field to six, meant that Aleksandr Kokorin would provide Zenit with much needed squad depth.

But then, Zenit coach André Villas-Boas seemed, at best, unsure of how to use Kokorin in his squad, as Kokorin more often than not came off the bench in the spring of 2016. Villas-Boas used him in a variety of positions, playing him as a left-winger, right-winger, and a central forward.

Now, however, under Mircea Lucescu, things have changed dramatically. The Romanian coach has implemented a 4-3-3 formation with Artem Dzyuba being flanked up top by Oleg Shatov on the left, and Aleksandr Kokorin on the right.

This system has allowed Kokorin to play out his greatest offensive strengths, as the forward was never a natural finisher, but rather a player who likes to hold on to the ball, and dribble through the midfield before looking for a final pass to a better positioned player, or finishing off an offensive move himself. In this way Kokorin has already provided four assists in the RFPL this season.

As a result, Kokorin’s confidence has skyrocketed in recent games. This was particularly evident in his goal against Tom Tomsk on the weekend. Kokorin received a high ball from Artem Dzyuba, who had extended a wonderful cross by Oleg Shatov with his head, and juggled the ball twice with his chest before letting the ball drop to the floor for a superb finish. The goal was even more fantastic given the fact that several Tom defenders had shadowed Kokorin closely.

The recent performances have meant that Stanislav Cherchesov has recalled Kokorin to the Russian national team—Kokorin had been shut out after he was photographed spending excessive cash in a nightclub following Russia’s poor Euro 2016. But Kokorin has responded brilliantly to the media pressure that was piled on him after the scandal.

The media has certainly responded positively to Kokorin’s recent form—as one blogger wrote recently, “it is time to respect Kokorin again”. This is certainly true, but Kokorin will have to keep up his form, as the expectation is that the forward can become not just a good player, but will finally live up to his billing as one of Russia’s brightest talents.