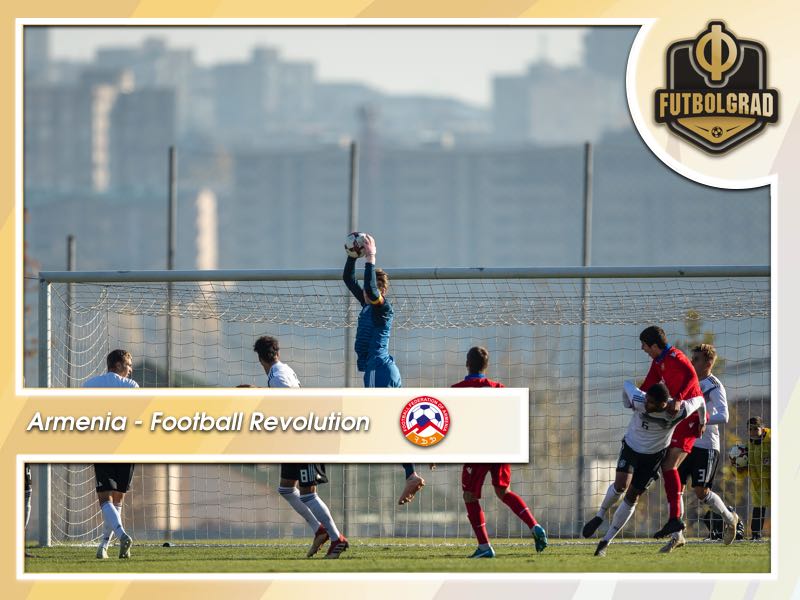 On May 12, just four days after the Velvet Revolution leader Nikol Pashinyan was elected by Parliament as the new Prime Minister of Armenia, Ruben Hayrapetyan – the president of the Football Federation and one of the main figures of former president Serzh Sargsyan’s political team, declared that nobody could force him to leave his post at the football government body. However, the further developments in the country and the arising complaint from the Premier League clubs forced Ruben Hayrapetyan to announce his willingness to leave the post two months later.

On 22 of September Artur Vanetsyan – one of the top personalities in the country next to Prime Minister Nikol Pashinyan, being the only candidate for the post, was elected as the new president of FFA, putting an end to the 16-year presidency of Ruben Hayrapetyan. A new executive committee was formed by the figures of the new Pashinyan-led government following the velvet revolution.

Nations League wasted ahead of the revolution

The year, when FFA has seen two different presidents for the first time in 16 years, the national team have seen three head coaches. After the goalless performances in friendlies against Estonia (0-0) and Lithuania (0-1), Artur Petrosyan was sacked as head coach in March. Vardan Minasyan, who had registered the historic-best result for Armenia in qualifiers (third place in EURO2012 qualifiers) was named as the national team coach to lead the team during the UEFA Nations League inaugural season, which was acknowledged as the best chance to reach a major tournament.

However, Vardan Minasyan, who is also one of the relatives of Hayrapetyan, resigned on September 21, just one day before the new FFA elections. Under his helm, Armenian national team started the Nations League with a home win over Liechtenstein but lost his crucial match in Skopje to main opponents – FYR Macedonia with a two-goal difference.

Soon after, the new leadership of FFA started the negotiations to hire a new head coach. Many big names, including Bert van Marwijk, were mentioned by media, while Gianni di Biasi was seen in Yerevan according to a report by Vivaro News. However, the negotiations with foreign coaches were finished with no success.

On October 8, just five days before Armenian national team’s home match against Gibraltar, Armen Gyulbudaghyants was named as new head coach. Having an experience of working with Henrikh Mkhitaryan and other famous Armenian players in their young ages, Gyulbudaghyants had a reputation of skilled and qualified academy coach, while this was his most responsible appointment as a head coach.

Armenia lost to Gibraltar 0-1 in Yerevan in the first match under the guidance of Gyulbudaghyants and the new federation management, leaving fans, players and officials in a state of shock. Three days after Henrikh Mkhitaryan and Co. demolished group leaders FYR Macedonia’s national team in Yerevan 4-0, which meant Armenia would have been on top of the group if they had beaten Gibraltar on that shocking night. While the result was surprising and controversial, the demonstrated game against Macedonia was long-awaited by fans. 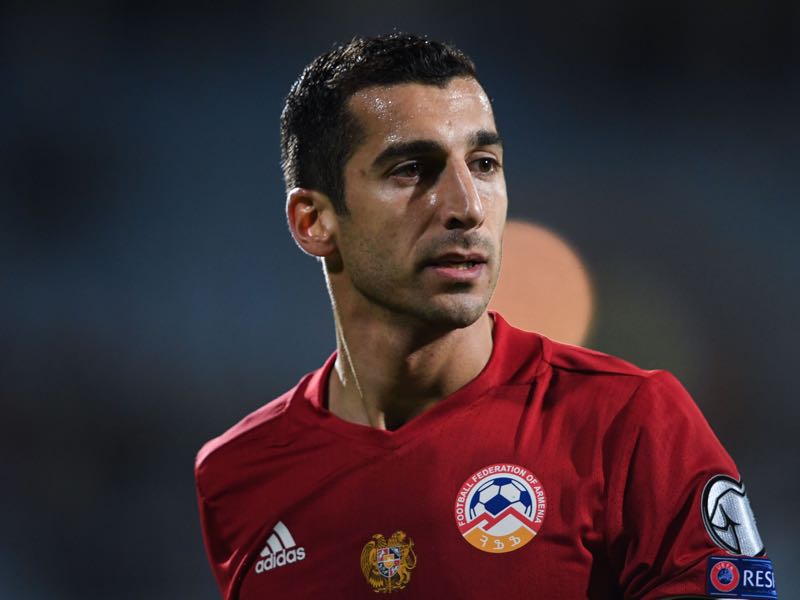 Despite the positive energy from the last match, the task to win the Nations League group remained unrealised, as FYR Macedonia won his two games maintaining a substantial gap. Gyulbudaghyants’ boys beat Gibraltar 6-2 as a revenge and draw Liechtenstein 2-2, ending the group stage in second place. The Nations League was widely welcomed and long-awaited chance for Armenian football to reach a major tournament, but that chance was cruelly wasted due to changes in Football Federation. The National Team will also compete in EURO2020 Qualifiers, but chances are not favourable in a group with Italy, Bosnia & Herzegovina, Finland, Greece and Liechtenstein.

The 2017/18 season, won by FC Alashkert, was the second and the latest to be played with only six clubs. Three teams from the second division were promoted, and they formed a nine-team Premier League for the 2018/19 season. About five of the nine teams are competing for the title after the first part of the championship, while almost all clubs are keen to fight for European cup qualification places, as it is regarded as the main prize and financial source in Armenian club football.

The year 2018 was also the year when an Armenian clubs reached UEFA club tournament third qualifying round for the first time. FC Pyunik, led by newly appointed head coach Andrey Talalaev, defeated last season’s Europa League group stage participants FK Vardar and FC Tobol to reach UEL third qualification round. FC Alashkert, which was dropped to UEL after being crushed by Celtic in UCL first qualification round, also reached the third round. Although many former USSR countries had their clubs participate in Europa League and even Champions League group stages regularly, this result was recognized as an achievement by Armenian football community and a real sign that Yerevan may host European matches soon.

The perspective of European cups is now the main motive of the investments in Armenian Football following the revolution. The changes made in football governing body boosted the process started years before, however. FC Shirak, FC Gandzasar-Kapan and FC Alashkert were the only clubs in Armenia with local investors, FC Lori from Vanadzor joined them last year. As FC Ararat had foreign ownership (Armenian businessman from Switzerland) for decades, FC Banants and FC Pyunik were bought by Russia based Armenian investors in the last years.

Ararat-Armenia also joined that list after investors bought the Avan-Academy and restructured the club into a first division side. With three teams this year promoted to Premier League from First League, three new clubs – Junior Sevan, FC Lokomotiv and FC Yerevan were founded and joined First League. These clubs reportedly have foreign investors as well. There are also several reports about the interest from other investors to establish new clubs or invest in the existing ones.

Armenian football is experiencing a club-boom now, at the same time the club’s infrastructures remain a big challenge. Only four of the nine Premier League clubs have their stadiums to play in. Many other teams also have problems with training bases and academies.

The Football Federation of Armenia currently works to solve these issues and decentralise football from the capital city as well. FFA vice-president Armen Melikbekyan says they support the investors to create infrastructures if they are willing to found clubs in regions. It is also worth noting that there are big investments in Yerevan, as FC Pyunik’s owner Artur Soghomonyan is planning to build a training base and a stadium, which will cost about $10 million to $15 million, unprecedented money in Armenian football.

The president of Armenian Football Federation Artur Vanetsyan confessed that he has three dreams concerning Armenian football after the revolution. First of all, all 11 regions of Armenia are supposed to be represented in Premier League by professional clubs, something unseen in the country for the last 27 years. Now only FC Shirak and FC Lori represent cities other than Yerevan, while Gandzasar-Kapan plays in Yerevan due to infrastructure problems in Kapan, Syunik region.

There are plans to help defending champions FC Alashkert to move to Martuni, Gegharkunik region, and FC Artsakh also announced their plans to play in Goris, Syunik region. As a renovated stadium will be opened in 2019 in Armavir, there are no local club from the region. Tavush, Aragatsotn, Kotayk, Ararat, Vayots Dzor regions are not represented with teams in professional football leagues.

The second dream of Artur Vanetsyan is to see Armenian national team playing in the final stages of major tournaments such as World Cup or European Championships. The expansion of FIFA World Cup to 48 teams and the EURO to 24 teams now gives a better chance for the countries like Armenia, but there is still a big deal of work to do in Armenian football to achieve that level. 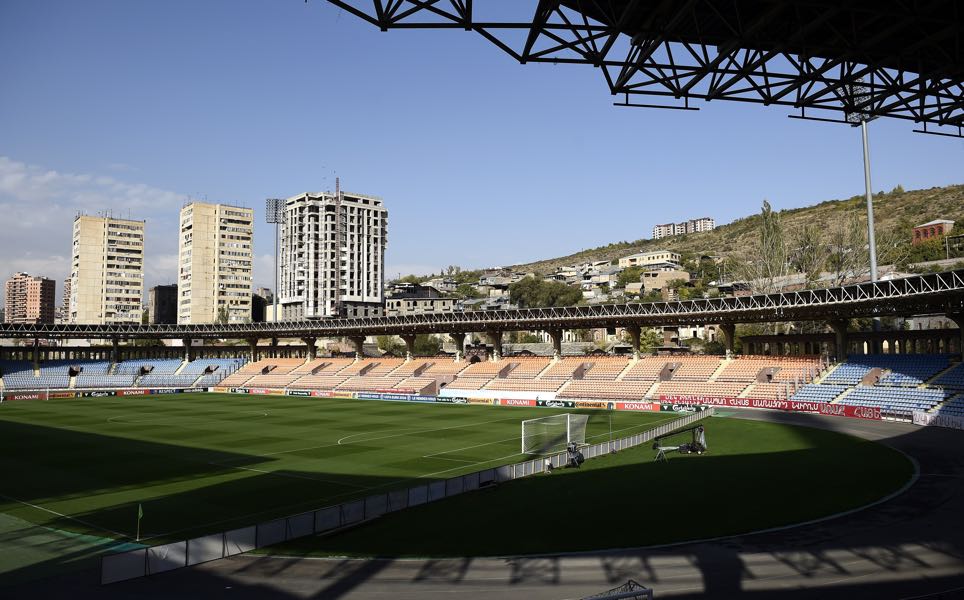 A general view shows the Vazgen Sargsyan Republican Stadium in Yerevan on October 13, 2014, on the eve of Armenia’s friendly football match against France. (FRANCK FIFE/AFP/Getty Images)

The Spanish Football Federation’s experienced youth coach Gines Melendes was appointed as a technical director of Armenian National team to formulate a plan for national football development, in other words, bring a revolution to Armenia’s football. The results are expected to take time, however, to be more exact after 4-5 years. Before that, the dream of the major tournament remains unreal.

And the third dream, maybe the most realistic one, is the construction of a new National Stadium in Yerevan. The old-styled Republican Stadium with 14,000 capacity now hosts Armenian National team matches, but as UEFA stadium restrictions are becoming more severe year by year, according to Armen Melikbekyan, the new modern stadium is a must-have. A plan for a new 33000-seat stadium is on the process of advancement and the negotiations with the potential investors are underway. Artur Vanetsyan also said he was given by UEFA and FIFA officials a promise to help to host big matches here in Yerevan.

The expectations of changes were high in all spheres of public life in Armenia after the velvet revolution. Surprisingly, the football was one of the spheres touched by the revolution, where the changes came faster and easier, than it had been expected, unlike political decisions. 2019 will show the first results of that reforms, but the positive energy in domestic football keep the expectations higher as never.

Karen Rafayelyan is a Yerevan based Armenian football journalist, and Editor-in-Chief at Vivaro News. You can follow Karen on Twitter @karafayelyan.