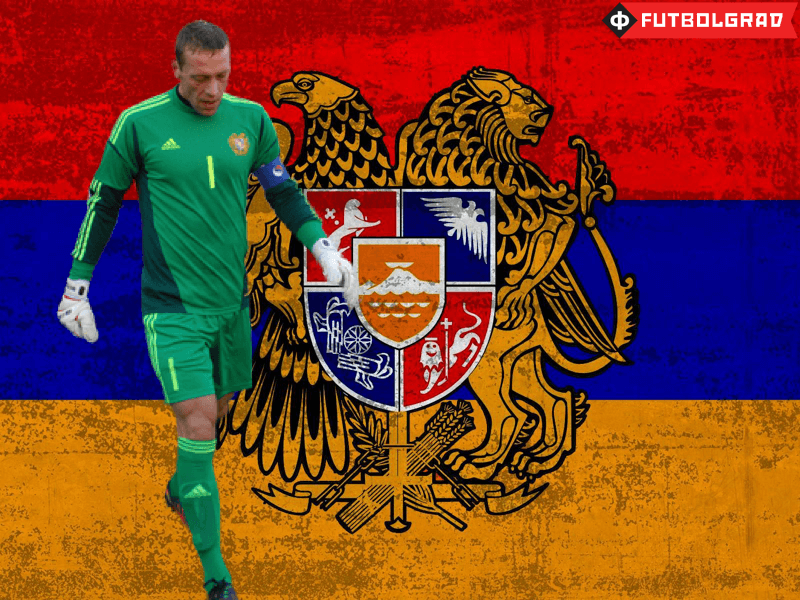 It isn’t often that a national team, which hasn’t won for 13 games, plays as if the result doesn’t matter. But for the Armenia squad that faced Belarus in Yerevan on March 25, the match was less about getting a first win in almost two years, and more about giving 95-cap goalkeeper Roman Berezovsky a warm farewell. 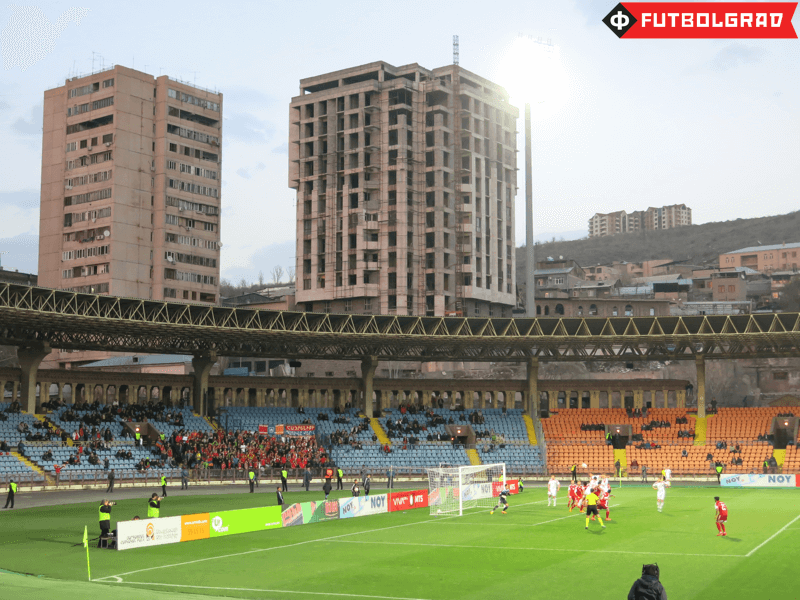 The international friendly at the Vazgen Sargsyan stadium felt like a testimonial game in the build-up to kick-off. A group of fans unrolled an enormous poster of Berezovsky behind one of the goals, and the cheer for the 41 year-old’s name as the teams were announced was even louder than the one for Borussia Dortmund’s Henrikh Mkhitaryan. Berezovsky, Armenia’s number 1 since 1996 whose club career was spent with Zenit Saint Petersburg, Dinamo Moscow and FC Khimki, came out of retirement to play the first seven minutes.

Belarus ensured it would be a friendly goodbye for Roman Berezovsky

The Belarussians played their part in making the night a truly pleasant friendly. None of their players based in Turkey (including Gençlerbirliği’s Aleksandr Hleb) were selected for the trip to Yerevan—because of Turkey’s stance on the Armenian genocide, Armenia and Turkey remain at odds with one another. When Berezovsky miss-kicked a clearance to the feet of striker Sergey Kornilenko in the very first minute of the game, the shot at an almost empty goal was sent straight into his arms. 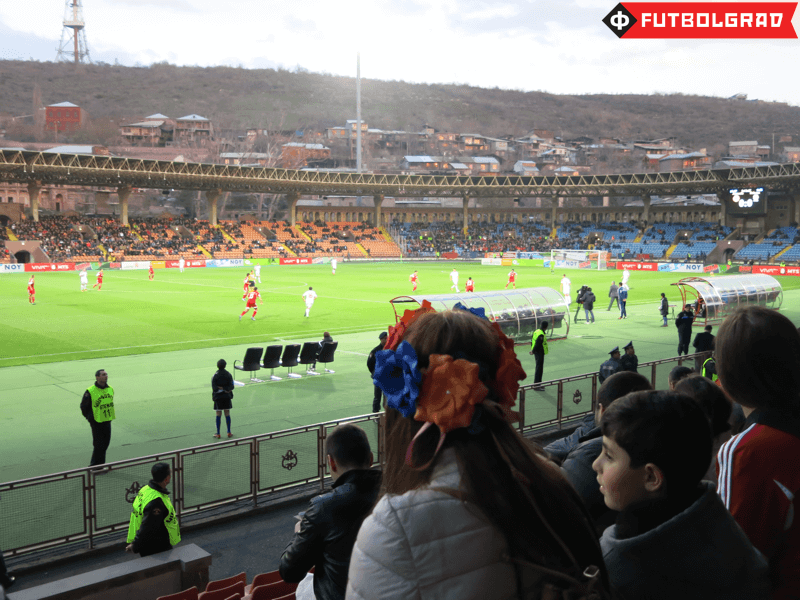 The match felt more like a testimonial rather than a friendly

After Berezovsky left the pitch—to hugs from his teammates and a standing ovation from the crowd of 8,000—the match became more intense. For the rest of the half, Belarus’s disciplined back four didn’t allow Armenia a chance.

It fell to the new ’keeper Arsen Beglaryan to keep the home side in the match with three eye-catching saves—the last one was a wonderful block from close range that ricocheted off his thigh. The 23 year-old is playing his first season for Yerevan’s FC Mika after having been discarded by Kuban Krasnodar. In his first half of international football, Beglaryan was the best player on either side.

Roman Berezovsky returned at the half-time break to receive a final round of applause, his lap on the pitch accompanied by late-Soviet ballads. A video of his career highlights, that flickered on the screens behind the goals, included many of the penalty saves for which he had become famous. 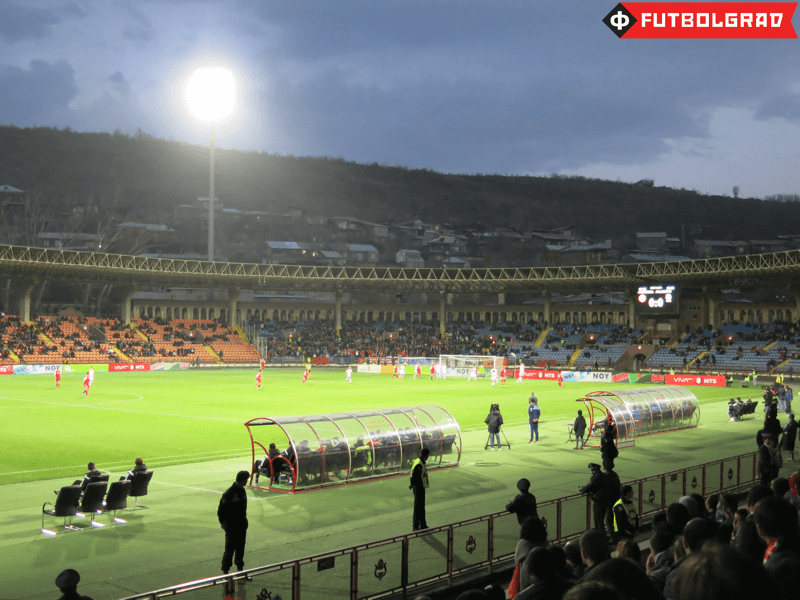 Berezovsky made a brief appearance during halftime

Although Berezovsky never made it to an international tournament, with Armenia he has been the national team’s mainstay for the last 20 years, and was one of the best goalkeepers in Russia during his time with Zenit in the 1990s. He is now the goalkeeping coach at Dinamo Moscow, for whom he was playing in the Europa League as recently as last season.

He came close to playing at Euro 2012 in Poland and Ukraine, when a confident Armenia squad driven by Mkhitaryan (then at Shakhtar Donetsk), Yura Movsisyan and the naturalized Brazilian forward Marcos Pizzelli finished third in their qualifying group.

Behind them Berezovsky kept clean sheets as the Havakakan drew with Russia and beat Slovakia 4-0 away from home. But since then the team has regressed, despite the long-awaited addition of Rayo Vallecano winger Aras Ӧzbiliz. The side managed by Varuzhan Sukiasyan finished bottom of a strong qualifying group for this summer’s European Championships in France, with corruption at the Armenian Football Federation blamed for the bad run of results.

Armenia dominated the second half, as Mkhitaryan began to impose himself on tired Belarussian defenders. The best football of the match came in added time, when a front three of Edgar Manucharyan (FK Ural), Artur Sarkisov (Volga Nizhny Novgorod) and another debutant, Gegam Kadimyan (Karpaty Lviv) twice came within centimetres of creating the winning goal. But the match ended an eventful 0-0. 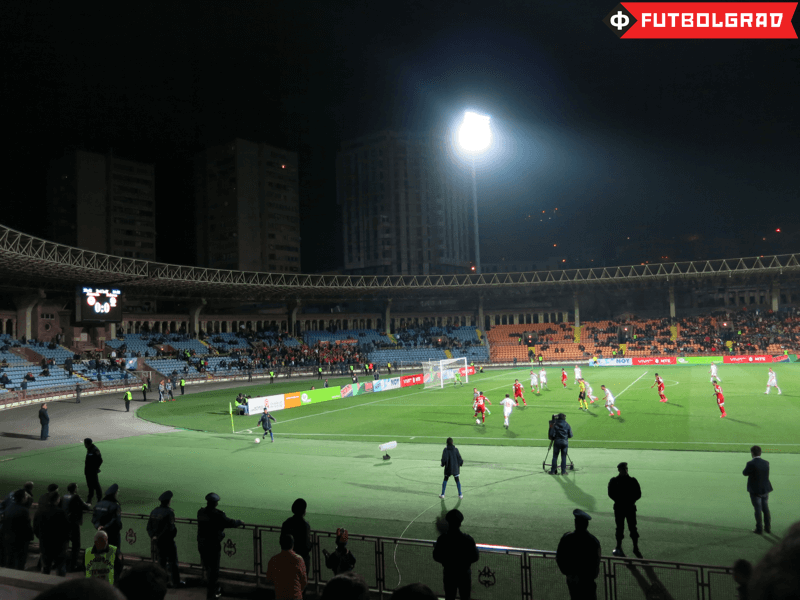 Armenia failed to secure a victory, as the match ended in a 0-0 draw

Armenia’s long search for a win will continue in the autumn, when they start their qualifying campaign for Russia 2018 with matches against Denmark, Romania, and Poland. But with players as talented as Mkhitaryan and Ӧzbiliz in their midfield, and with the new keeper Beglaryan looking an impressive successor to the departing hero Berezovsky, it will happen before too long.

Jonathan Campion lived in the CIS for four years, and still supports his old home teams Shinnik Yaroslavl and Dynamo Kyiv. His work now takes him to five former Soviet republics. He writes at jonathancampion.com, and tweets @jonathancampion.