Roman Shirokov – A Football Genius or a Mercenary?

If you’ve been watching Roman Shirokov for many years, you probably think that nothing he says could surprise you. What is surprising, however, is the fact that one of the most talented midfielders of this generation—and, to my mind, probably one of the most under-rated players Russia has produced since the fall of the USSR—has never moved to shine in England, Germany or Spain.

He was instrumental to Russia’s blistering performance at Euro 2008 and a key figure of Zenit Saint Petersburg’s golden age—when Roman’s efforts helped the Zenit to the UEFA Cup and the UEFA Super Cup, two domestic titles and two Russian Cups, followed by his assuming leadership of the national team and helping it to progress first to the 2014 World Cup in Brazil and, more recently, to Euro 2016. It has always seemed that Shirokov had “bright career in Europe” written all over him.

Yet, the midfielder has always opted to stay at home—mired in controversy that ran the gamut from his choice of employers to his incredible public statements. In a nutshell, Shirokov has been jumping between the Russian Premier League’s biggest rivals for years. To help our English audience understand, imagine if a player went from, let’s say, Everton (in Roman’s case, CSKA Moscow) to Manchester United (this would be Zenit), then joined Liverpool (Spartak Moscow) and then went back to Everton (CSKA), all the while, saying things destined to incite fury in rival fans or full-time war with his own fans. In one instance, in 2013, Shirokov all but middle-fingered home fans after scoring a goal, for which he immediately saw their outraged reaction and heard a roar of boos on his way out of the pitch

Shirokov – A Career of Controversial Statements

Now that Shirokov has returned to the club where his career began—CSKA Moscow—let me present you with a number of his controversial statements over the years:

April 11, 2008 (at Zenit)
“My father supported Spartak and I could have joined them. I was not really keen to leave Moscow and I felt Spartak’s football style was close to me” (at the time he was playing for Spartak’s bitter rivals Zenit).

“Spartak is no match for us!”

“All piglets (joking yet mocking way to refer to fans of Spartak Moscow – AY)—celebrate your deserved defeat.”

“This word is benign in certain circles. Friends supporting different teams can refer to each other as “meats” (Spartak Moscow), “vagrants” (Zenit) or “horses” (CSKA). In any case, my friends who support Spartak take these things normally. And this message was for them in the first place. If you don’t want to read this, you can just unfollow me on social media.”

(Needless to say, Spartak Moscow fans didn’t accept that apology, were furious with him, and booed Shirokov at the next game – AY)

“Fedun (owner of Spartak Moscow – AY) is watching football from outer space, it seems. He makes statements sometimes which make you wonder whether this man and football are located on different planets. Note that he makes these statements in spring and autumn, I don’t know whether this is some kind of seasonal disorder. I would recommend to Spartak’s owners not to make loud statements, but to focus on achieving what they’ve been unsuccessfully trying to achieve for a decade (winning the title – AY). Focus on your work instead of looking for a black cat in a dark room.”

August 11, 2012 (at Zenit, having scored 3rd goal against Spartak away and showing abusive gestures to his own fans who had a long-running conflict with him)

“I did not show any gestures to fans of Spartak. I actually thanked them for their support which they have shown for a number of games (Spartak fans have vocally supported him—despite the fact that he scored against their team—because of his brutal feud with Zenit fans – AY).

“The people who brought me to football, my father and godfather, have supported Spartak all their lives. Besides, 99% of my friends support the red-and-whites. This justifies my choice. I hope I’ll be able to make Spartak fans happy – I want them to recall what winning the title tastes like. It’s a challenge for me, because the club with such traditions has only one goal—winning trophies. I hope I’ll be able to contribute.”

(Again, this move in England would be similar to joining Liverpool straight from Man United – AY)

“Someone wants to rock our red-and-white boat? Dream on!”

“We lack the famous Spartak style. That’s because the team has been playing attacking football for 80 years and winning trophies and then someone came and destroyed the style. I think it’s wrong. But if the club’s president supports Dynamo Kiev (i.e. Leonid Fedun reportedly supporting Spartak’s bitter rival from the Soviet era – AY), this comes from him.” 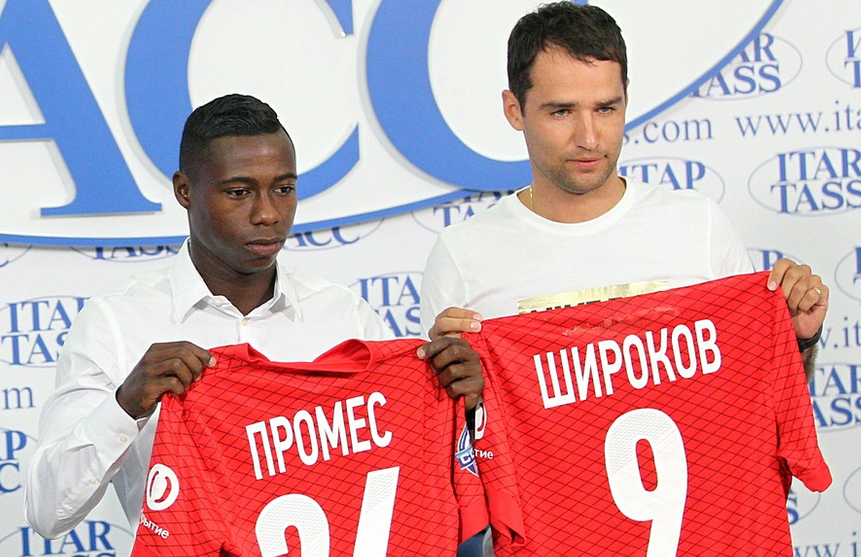 Zenit, Spartak, CSKA, Roman Shirokov has played for them all – Image via RussianFootballNews.com

“I’m happy to come back home. This is the club where I grew up.”

(And again – it’s like going from Liverpool to Everton – AY)

Who Is Roman Shirokov?

So, as you can see, it’s hard to find an analogy in world football—a player who switches between bitter rivals and takes swipes at opposition fans only to appease them later. Which generates the question: Who is Roman Shirokov—an under-rated football genius or a vulgar loudmouth? With the midfielder embarking on a new adventure with his home club—currently sitting comfortably at the top of the Russian Premier League—and getting set to skipper Russia at the Euros in France, only he can provide a clear answer to this question.