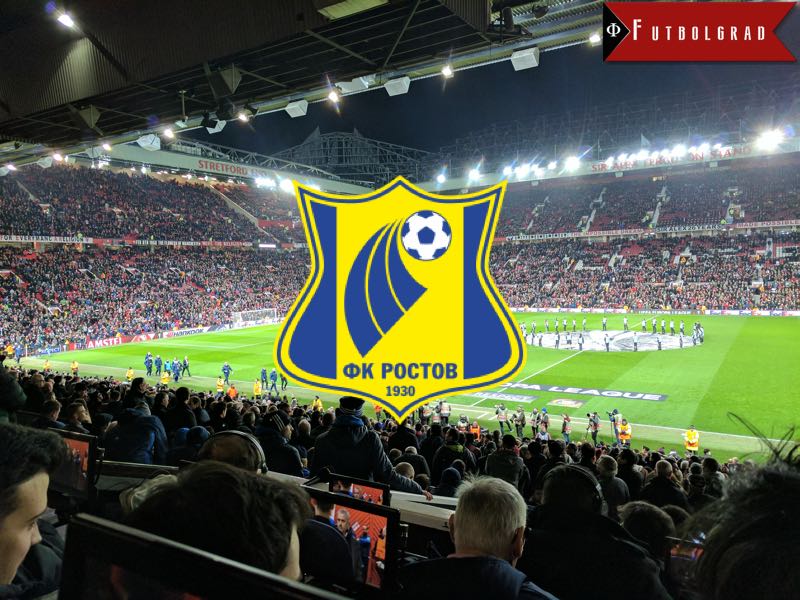 Rostov – After the Rain on Thursday Life Goes on

It had been a roller-coaster of a ride for Rostov in Europe. Ironically, however, it was at Old Trafford, Manchester United’s ‘Theatre of Dreams’, that FC Rostov’s European hopes and adventures came to an end. However, unlike at Bayern München the Zholto-Sinie left the pitch with their heads held high, and will feel unlucky not to have taken the Round of 16 tie into a minimum of extra time.

Before this second leg began there was torrential rain at Old Trafford which poignantly, as we waited for the critical Rostov away goal, bowed towards the old Russian expression. 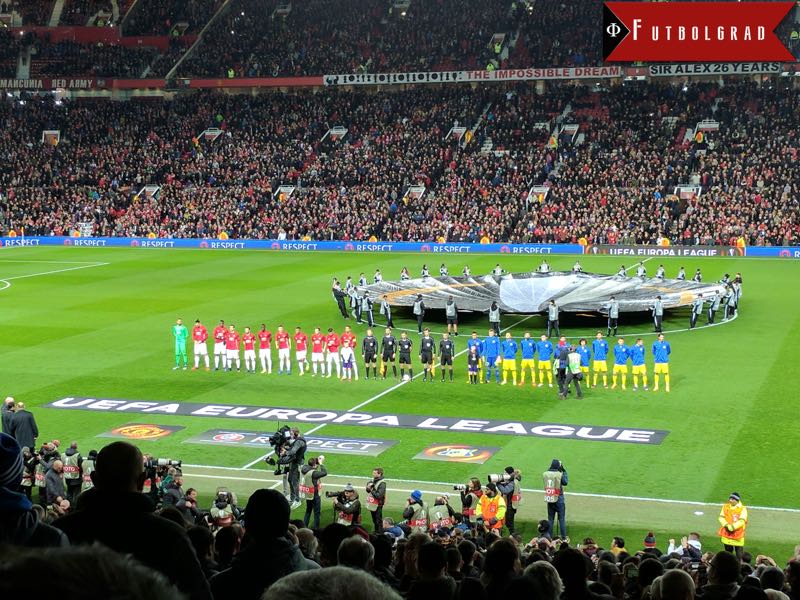 Had it not been for Sergio Romero’s acrobatics in the Manchester United goal then Aleksandr Burkharov could have bagged a brace for the valiant Rostov. The hero from the first leg will feel unlucky not to have found the net in both the 78th and 90th minute. He was exceptionally active from the moment he was introduced on the 61st minute, replacing an out of sorts Sardar Azmoun—the Iranian was a little under par at Old Trafford but can be pleased with his overall Europa League campaign.

Rostov were lucky to escape early

Manchester United had a number of early chances and Rostov were lucky to escape a valid penalty claim after Nikita Medvedev appeared to push United’s Armenian midfielder Mkhitaryan square in the back—the referee didn’t point to the spot and Rostov survived. Only minutes later the Selmashi escaped again as Ibrahimovic rattled the Rostov post with a ferocious shot that let out an audible crack as it hit the woodwork with venom.

Weathering the first half storm with a degree of ease, it would have been Ivan Daniliants that went into the half time break the happier of the two coaches, although Rostov did fail to capitalise on two good opportunities. Firstly Denis Terentyev found himself with space on the right to cross to an unmarked Azmoun, unfortunately the pass was behind the Iranian—all Dmitri Kirichenko could do from the bench was look up to the sky and imagine what could have been.

Then on 31 minutes Dmitri Poloz found himself spearheading an attack through United’s vacant midfield, but by the time the ball ended up with Khoren Bayramyan the chance for the fast break had gone.

Rostov looked more settled in the second half

When the teams reappeared for the second half Rostov looked to have settled and a dominant display by Aleksandr Erokhin ensured the previously lively Henrikh Mkhitaryan was kept in check. The biggest United danger to Rostov in the second half came with the introduction of Marouane Fellaini—the Belgian replacing an injured Paul Pogba on 48 minutes. Rostov though, for all their composure will be disappointed that the United breakthrough came after a mistake.

Fedor Kudryashov with the loose ball, pounced on by Juan Mata who began and finished the Manchester’s counter attack. To the Zholto-Sinie’s credit they battled on and on another occasion, both of Burkharov’s chances could have gone in. Football is normally decided on fine margins, and so it was this evening – Utd a shade sharper in converting their limited chances. Rostov were just missing the killer instinct that had been on show versus Sparta Praha exactly one month ago.

On another night, this could have been Rostov’s night, but it was not to be—however, the Selmashi had shown the gap between the Russian Football Premier League and the English Premier League was, over these two legs, not as wide as many suggested. Daniliants emerged for the post-match press conference in reflective mood, “There is a positive that we have acted with dignity, despite our losses and circumstances” he said.

European campaigns were the priority for Rostov

Speaking directly to the Futbolgrad Network, Daniliants explained the priorities that had been placed on the European campaigns: “It was difficult for us to play on two fronts. Priorities were formed in such a way that in the first place were the European cups. I am pleased that our leader Kurban Berdiyev managed to confirm his high level. He led the team ahead, despite all the difficulties. Now it will be necessary to rebuild, to move from one sphere to another. On Sunday, the rival will be of a different order, but I hope that we have enough strength to finish the season with dignity.”

Daniliants also thanked @ManUtd for their hospitality & wished them luck for the remainder of the @EuropaLeague competition. #UEL @rostovfc pic.twitter.com/OYrYgNU7PM

What does await is a return to RFPL action and a potential banana skin trip to Krylia Sovetov Samara, but the Zholto-Sinie will be buoyed by a 6:0 demolition of FC Tom Tomsk the last time they played away from home domestically.

Although the European adventure is over there will be many fond memories of this extended campaign. Originally in UEFA’s premier competition they witnessed their first ever Champions League group stage victory—and what a victory it was. Noboa’s superb free-kick the crucial goal in a historic 3:2 home result against the five time Champions of Europe, Bayern München. With that victory enough to seal the crucial third place in Group D, Rostov then found themselves in the Europa League. A memorable 4:0 victory against Sparta Praha will be long remembered as will the first leg visit of Manchester United in this Round of 16 tie.

Combining coaching with writing Chris’ time is spent covering football from all angles.  Having been a regular at Liverpool FC since the late 80s he also has a passion for the Bundesliga and all things German.  Contributing to a number of local, national and international publications he is focused on analysis and the stories behind the goals.  He can be found somewhere between the Kop and Yellow Wall. Follow Chris Williams on Twitter: @Chris78Williams