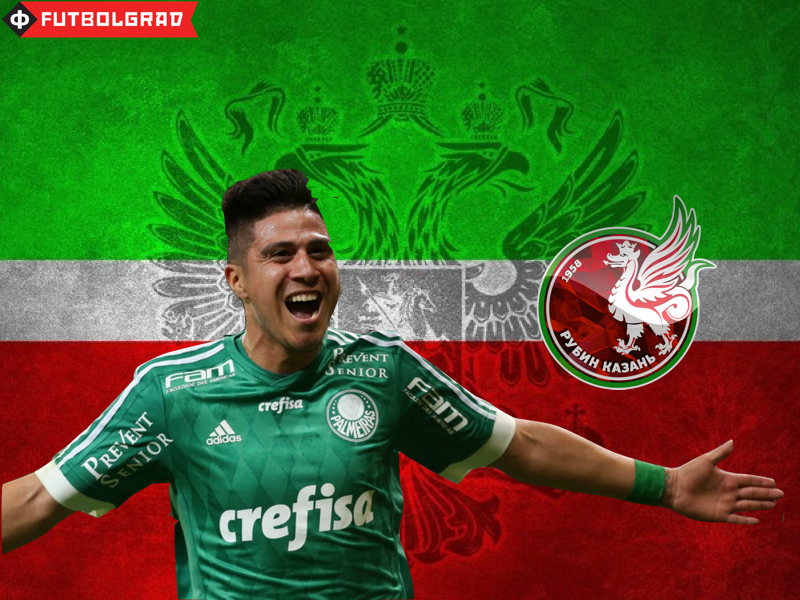 According to Torcedores.com Rubin Kazan have made an offer of $3 million to the São Paulo based football club Sociedade Esportiva Palmeiras for the signature of the Argentinean striker Jonathan Cristaldo.

Torcedores reported that an earlier offer of $1.88 million has been rejected by Palmeiras. Earlier, the Brazilian journalist Leandro Boudakian reported that Palmeiras would want at least $2.57 million for Cristaldo.

Globo meanwhile, reported that Palmeiras would like to earn at least the $3.5 million that the club spent when signing the player from Metalist Kharkiv in 2014.

It now appears that Rubin are more than willing to meet the demands of the Brazilians. A transfer to Rubin Kazan would be Cristaldo’s second stint in the post-Soviet space; between 2011 and 2014 he had played in the Ukrainian Premier League for Metalist Kharkiv and scored 27 goals in 62 games.

Cristaldo returned to Palmeiras in July 2014 and in 65 games he has scored 16 goals—14 of them last season.

According to Globo, however, Cristaldo is not enthusiastic about a move away from São Paulo as he prefers living in Brazil over Russia. But the club currently has eight strikers on the squad, and Cristaldo may face reduced playing time, which could encourage him to move to Kazan after all.

Furthermore, ESPN Brazil reported that the club doesn’t actually hold the rights to the player, instead Palmeiras president Paulo Nobre holds some of the player’s economic rights.

Nobre bought Cristaldo at the request of Palmerias’ former coach Ricardo Gareca. Now, however, with Gareca gone, and with the club having several strikers on the squad, Nobre is willing to sell the player sooner rather than later, as Cristaldo’s successful 2015 season means that there is a strong market for the striker at the moment.

Rubin Kazan are currently ninth in the Russian Football Premier League, and are in dire need of a striker who can score consistently— Rubin’s current top scorer is Marko Dević, who has only scored 5 goals this season. It is hoped that, Cristaldo will bring much-needed goal scoring depth to the Tatarstan based club.